The auction of 450 collector cars from a long-closed Nebraska Chevrolet dealership begins this Saturday, Sept 28, at 8am…I see in TV ads the sale will be broadcast that evening on the History Channel…They are really pouring on the hype, Some of the “Centerpiece” cars have already attracted startling figures in “pre-bidding”, whatever that is…I was hoping one of the cable channels would carry it live…

I read about this.

The owner refused to sell any of his vehicles when the new models came out. So he stored them. Some are 30+ years old with ZERO miles on them. They said people are coming in from all over the world to bid on these cars.

Yeah, 40 or 50 are new or like new cars, stored inside…Some were damaged when a heavy snow collapsed the warehouse roof…That leaves about 400 stored outside in a field, trade-in cars that are in poor to very poor condition. They have been vandalized, parts removed…These cars will sell on Sunday…I hope the results of the sale are published car by car, not just a few high-priced cream-puffs…

I think you can watch the action on the internet. You can register to bid and see the cars for sale here https://www.proxibid.com/asp/catalog.asp?aid=68561&ipp=100&sort=0

I think I may take a motorcycle ride down there to check it out, motel rooms are booked for at least 50 miles around the town though.

I thought it would be fun to go but 350 miles away and schedule not permitting. Sounds kinda dumb when you’re retired but you get things scheduled that interfers with your time. That’s why I don’t like to commit to on-going things that screw my free wheeling schedule up. Glad it’ll be on TV.

I heard about it here:

In Nebraska, a Field of Low-Mileage Dreams

The Lambrecht collection, featuring hundreds of American classics hidden for decades in a field in Pierce County, Neb., will go on sale this month.

Will try to remember to watch on TV Saturday night.

So far, the 1958 Cameo Pick-up has the highest bid, $46,000…That’s a lot of money for an old Chevy truck with the roof stove in…But then, somebody has bid $75 bucks for a 45RPM record of “Corvair Baby” by Paul Revere and the Raiders…And the sale hasn’t even started yet…

Sales like this one, just like cocaine, are nature’s way of telling you that some people have too much money.

“If you bought it at an auction, you probably paid too much for it…”

"If you bought it at an auction, you probably paid too much for it.."

Some 30 years ago I went to a few auctions to buy some power tools…Table Saw and Radial Arm saw.

At one auction they had a 2yo Craftsman table saw. Not the best saw…but decent. I stopped bidding at $300. It sold for over $700. At the time you could go to Sears and buy that exact same saw (only new) for under $500. That was the last time I went to an auction.

I’ve pretty much given up watching the auctions on TV. Corvette…Camaro…Malibu…Corvette…Malibu…Camaro…Mustang…Mustang…repeat…repeat…

At big auctions, egos can play a BIG role. Another little game, shills hired by the auction house or property owner will bid up items they feel are selling too cheap…

I’ve given up on auctions too but this would be fun. Years ago I was trying to buy a couple air compressors at auction but they went for about the price of new.

I wanted to go to that unveiling of that 57 Fury in Oklahoma too but glad I didn’t. Never thought it would just be all rusted to bits.

Most of the used, outside stored cars have at least one window broken out, to allow thieves access to them…This has allowed rain and snow to drift into the cars, destroying the interiors and rusting out the floor pans…Anyone who buys one of these without inspecting it carefully is likely to be disappointed…

I don’t see how a small-town Chevy Dealer could save all these cars, both new unsold stock and most of the trade-ins and stay in business…All the profits sat locked up in unsold vehicles…But maybe tomorrow is payday for the family…

It’s Saturday morning! This auction starts at 10am central time…I think it will be broadcast live on the History channel and there is a live feed of the online bidding…Some of the prices on the new “special interest” cars have reached crazy levels in online "pre-bidding’…

I thought it was going to be on at night at like 8:00 central on the History channel but I don’t know.

Here’s a link to the Sioux Falls article with some pics. 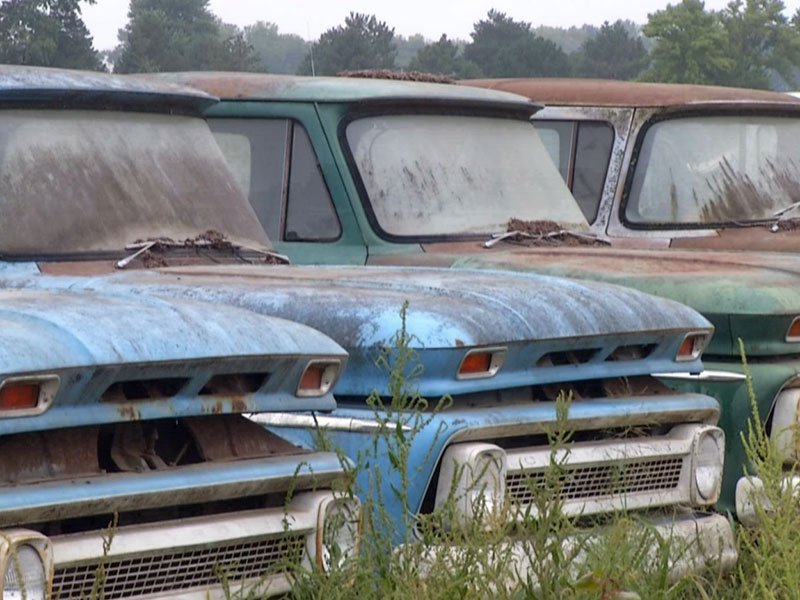 Thousands of car collectors will be in Nebraska this weekend for an auction like no other. About 500 cars and pickups from the 1930s to the 1970s will

The business model of stashing cars back without turning them over makes no sense at all financially. One has to assume the dealer was wealthy enough on the side to cover the cost of those cars; possibly due to land ownership, large farming operations, etc, etc.
Maybe the dealer had a real buddy-buddy deal with the bank on a floor plan…

There were several long term, small town Ford dealers around here that were involved in farming and land ownership and considering the locale, that’s at least a possibility.

A golf course is mentioned as being located next to the dealership. One of the Ford dealers here also owns a regulation 18 hole golf course just a miles down the road from the dealership and that’s a lot of valuable land to tie up in non-farm and non-oil field use. A 25 dollar greens fee on the weekend (less on weekdays and includes the cart) can’t be that much of a money maker so one has to assume it’s more of a corporate playground than anything…

Well glad I didn’t go. I was prepared to pay up to $2500 for that Corvair. Don’t know how I’d get it back to Minnesota, so problem solved.

Is there a live feed or something??