I know this has been discussed ad nauseam (though I cannot remember when the last time it was on the Car Talk site), but my brother-in-law has just started selling HHO kits and claims for $400.00 I can install one on my 2005 Ford Escape and boost the milage 5-10mpg. Besides the fact that I hate doing business with my in laws, if these kits really did work why wouldn’t EVERYONE own one? I am not a conspiracy theorist, I just want an honest factual yes or no.

You are 100% correct-it is a complete scam. If it worked you would see shelves of them at the parts stores and Walmart, and EVERY car would come with one.

Invite your BIL to join us, we can set him straight. But he probably won’t believe it…

Your brother in law is either willfully scamming people or the more likely scenario; he bought into a sales pitch and became a distributor for something that he thinks actually works.

If it added even .5 MPG to the fuel economy the Feds would have already mandated it on anything with wheels and the car manufacturers would be buying the units in bulk droves for 10 dollars a unit.

@74beetle your brother-in-law is ripping off gullible people.

Nevertheless . . . he probably sleeps well at night, because he’s dreaming of all the easy money he’s earned so far.

There is no justice in this world.

So, how do I - or do I break the news to my wife who really doesn’t understand anything with more than two moving parts?

There are a number of reliable sources that test devices to see if they work. Web search for these devices and you will see that they don’t work. You might show them to your wife and let her make her own decision. Just don’t put one on your car. Here’s a few to get you started:

The Federal Trade Commission reached a settlement putting a stop to the phony claims of marketers who told consumers their fuel economy device could boost automobile gas mileage by at least 50 percent and "turn any vehicle into a hybrid.

The last one nails it, but is fairly technical. It also deals with perpetual motion, and includes HHO generators as a subset. The first 3/4 of the presentation is good background, and the last 1/4 discusses HHO. It is thoroughly debunked in a tehnical forum.

BTW, note that some of the HHO proponents are in jail for defrauding the public. Your BIL could end up there if he sells enough of them and the buyers are unhappy enough to alert the authorities. You should expect that they will be. As a seller, he is assumed to be an expert; the general public is not. That means he is responsible for knowing what he sells and making sure it is not snake oil. You might make the case to your wife that you are concerned that her brother might end up in jail, and you want to help avoid that.

I have a very long post someplace (I’ll dig it up if you really want me too) that shows the break down of why it can’t work.

I know he’s going to use the pitch NASA uses it. Yea, and IF you had solar cells that had fully charged the batteries and the energy was truly going to waste it would make sense to use it to make hydrogen and oxygen, but YOU don’t have an excess power, your alternator only puts out enough power to run the car and charge the battery, if you turn on light, radio, etc, you use more gas to produce electricity. Which is another point they will try and toss out at you, your alternator is putting out excess power, its not.

Thank you all for your wisdom. I did have a great sense that it was a scam. BTW - I did fail to mention that my BIL was a used car salesman at one time… In the end, my wife will just have to get over it, I am not going to buy this contraption. Worst case, I will end up in divorce court, but I will be $400.00 richer.

Popular Mechanics tested a rig like this 4 years ago. Even more amusing than the article are the comments left… 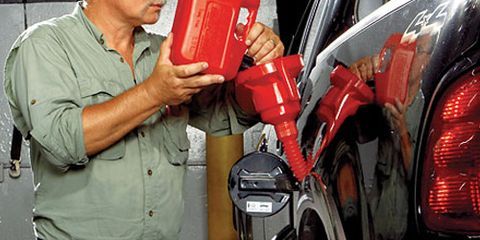 Did you ask your BIL how much this franchise cost him, he was probably ripped off as well.

Dateline did a special Dennis Lee claims for about a thousand bucks, he will sell you a device that maximizes your gas mileage in your car. Does it really work? Dateline gives Lee's product a test-drive.

You can’t just say “conservation of energy” as a means of disproving HHO. Cars occasionally have “too much” kinetic energy, and a means of turning it into stored energy until needed again WOULD boost FE. (Hybrid brake theory 101.)

This energy can be stored as battery charge, flywheel, big rubber band…or even hydrogen. In theory, HHO could boost FE if you somehow tied the generation vessel into the TPS or brake light switch.

In actual practice, HHO doesn’t work because of 1. Not being set up this way and 2. The load is too puny to make a real difference, ecen if set up properly.

I’m just pointing out that those dismissing HHO on Thermodynamic grounds would probably also dismiss hybrid propulsion entirely, if encountered a priori.

All HHO systems as sold can be dismissed. If one had a hydrogen fueled car with regenerative braking then ok. But that’s nothing like these.

If anyone has doubts about the depth of the sucker pool then just go to eBay, pull up a few sellers for these scam devices, and read their feedback. They’re selling them in countless droves to the gullible.

Just because HHO “might” work in theory doesn’t mean that the brother-in-law isn’t robbing poor suckers of their money. Not the nicest guy, IMO. Realistically, he must know he’s selling pure hogwash.

Looks like I will be going back to a 4-cylindar to get improved milage. Too bad really. We can build a drone aircraft, we can build a stealth aircracft, yet we seemingly refuse to develop a car that has the power of a V8 Mopar from late 1960’s & 1970’s and the milage of those annoying Smart cars. Again, thank you all for your knowledge.

A V6 Accord will out-accelerate most '60s muscle cars. But they don’t make that nice noise doing it.

“A V6 Accord will out-accelerate most '60s muscle cars.”

Ooooh! I’ve always enjoyed blowing almost everyone off at the light!