I’m a high school student working on my science fair project and I need some help! My topic is hydrogen booster fuel systems. I’ve seen tons of websites trying to market the things but I’m not sure how trustworthy they are. (I’m actualy intentding to try and make one, so if anyone has advice I’d be very grateful!) I’m going to visit a man that sells them, as he’s agreed to let me interview him and show me how the systems work. I’m just not sure what to expect. Does anyone have ideas or good places to find information about these systems? Thank You!

If you’re talking about the ones that advertise that they’ll seperate the hydrogen from water to boost power, they’re a scam.

See the man, carefully document what he says, and then discuss it with your science teacher. It’ll be a good learning experience.

I strongly suggest that you talk with your science teacher before working with anything of this sort. While seperating the hydrogen from the oxygen in water is much more difficult than it sounds, and I seriously doubt you’d be able to successfully make such a seperator, hydrogen can be dangerous, as the deigners of the Hindenburg blimp discovered.

As TSMB said, these sites are scams. That is, they are taking honest people’s money and providing them with useless equipment, a fraudulant business. . Do NOT accuse this man, he will have all kinds of ‘explanations’. Just be assured that NO legitimate organization has found any benefits to these devices. You can read Popular Mechanic’s comments here: http://www.popularmechanics.com/automotive/new_cars/4271579.html

Also, here’s a great digram that explains where all the energy released during combustion goes: 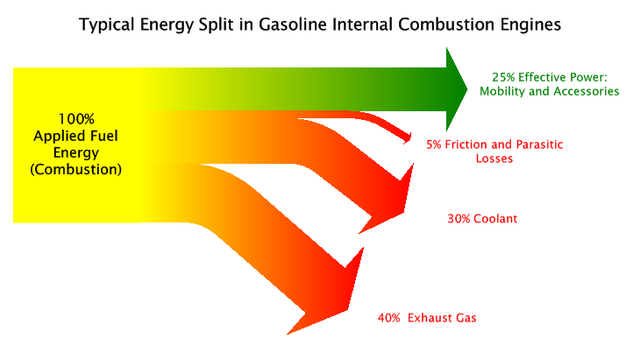 This is why the “HHO” scams can’t work - about 75% of the energy released is lost as heat and friction, so it’s a 4 to 1 losing proposition!

You have recieved permission from your instructor to pursue this activity?

Your instructor should have told you about the impossibility of these systems.

Just what exactly are you planning to make?

A poster with diagrams about chemistry,physics,and how people can avoid falling for scams would be a worthy exibit.

And don’t be fooled if he shows you videos of gas bubbling in a bottle. It is no trick to make hydrogen and oxygen through electrolysis. What is a trick (and, actually, impossible) is to make enough using the car’s power to actually improve the car’s fuel econonomy.

Another way to look at it is you test the hypothesis that hydrogen boosters work. You will either find that they do, don’t, or the results are unclear. Don’t go into it with a preconceived notion about the outcome. Just test your hypothesis and see what happens. You will certainly learn something, no matter what. And that’s what it’s about. And don’t think that it says anything negative about you if you choose a certain hypothesis and it fails. That’s just the way science is. The important thing is not whether you guess right to start, it is that you know the correct answer in the end.

A huge (yes, huge) number of scientific breakthroughs were accidents. The Big Bang theory was just such an accident. Two scientists at Bell Labs were trying out a new antenna and couldn’t get rid of some pesky noise in the system. No matter what they did, it wouldn’t go away. It turned out to be the Lyman Alpha hydrogen frequency; the key to the Big Bang. They won a Nobel Prize - almost completely by accident.

While I agree that this might make an interesting science project since often projects with negative results are a better illustration of the scientific method, it might be a bit difficult. The trouble is that it is actually very difficult to quantify any improvements in either power or efficiency of a car engine outside of an automotive laboratory setting. Due to differences in driving conditions and styles and with uneven gas fill ups, it’s actually extremely difficult to accurately measure MPG’s and it’s practically impossible to equalize every variable to make sure that what’s being tested is the HHO system. Of course, this uncertainty is what makes it possible for hucksters like this to keep selling these things.

Off-hand one way you could maybe if you have access to an older carbureted car and somewhere with no traffic and no stops where you can drive around in circles you can (carefully!) mount a little quart or half gallon gas container somewhere and run the line to the carb and then see how many laps you can do with a set quantity of fuel with and without the HHO system going. Though no doubt once you get a negative result this way, the huckster will claim his system only works on modern fuel-injected cars.

Incidentally, this is an actual procedure listed in the factory service manual of my 1964 LeSabre for customers complaining of poor fuel economy.

Not one of these devices will work - at all. They’re simply separating the gullible from their money; and apparently doing a good job of it based on the proliferation of these scams.

My memory is fuzzy on this but I think the first huckster that promised cars would run on water made these claims back in the early part of the 20th century; almost a 100 years ago. If technology from legitimate sources has not accomplished this in a 100 years then why believe some shyster operating out of a boiler room and no address has the inside track.

Even more so, if it worked why would someone be selling plans for this junk for 39 bucks or complete systems for a few hundred when they could skip the penny ante stuff and hold entire nations, car companies, and oil companies hostage for countless billions.

If I were the brainstorm behind something that actually worked then you can bet I’d be the hostage taker instead of running ads on the net or in the back of Popular Mechanics or the local newspaper want ads.

It’s simple physics. It takes more energy to break down the water into Hydrogen & Oxygen (sometimes referred to as “Browns gas” than is given back when the gas is burned. Compared to the gas volume being drawn into the engine, the volume of gas generated by these things is minute…In practical terms, they do NOTHING other than enrich the people who sell them…

Sounds like you have a great opportunity to do an interesting science project on all the “theory” and “science” claims these scam artists are so eloquently marketing. The substance of your project would be to explain why those claims are invalid.

I don’t plan on getting sucked into a scam, but do you guys KNOW it won’t work or just THINK it won’t?

I work alongside guys who have built those devices and claim to get 2-3 miles per gallon increase. They are not difficult to build, they do in fact generate hydrogen, but as far as the cost to run, do you get your payback due to increased battery and alternator usage, does that offset the increase in MPG? it’s really hard to do a real world (or lab. test for that matter). They say that the 02 sensor needs to be partially removed as well as putting a rheostat inline with the MAF sensor because the ECM is thrown off by the increase of fuel going into the intake. Their devices (which I have actually had my hands on) are nothing more than a coil of copper wire (or plates) in a sealed container with water and baking soda(to increase conductivity). There is a tube in the top of the container to collect the hydrogen gas, then they drill a hole somewhere in the intake (prior to the air filter). The tube is just inserted into the intake hole and as soon as the device is powered up, it instantly starts making hydrogen gas. The maf rheostat needs to be adjusted to get the propery voltage signal to the ECM. I have yet to see a published article with imperical data to verify that you do get a positive return on investment. I do know that with the more baking soda added to the water, the conductivity increases and it puts a larger drain on your battery. It you don’t have your vehicle running, it will drain your battery down in no time. Good luck. As the other posters said, it will be an interresting experiment to conduct, because you might discover something that has never been discovered before. You might also discover that positive or negative results cannot be determined due to the lack of precise environmental controls being too hard to maintain.

Read the numerous discussions in this forum explaining why it won’t work. If you’re still not convinced, please go buy a unit and find out for yourself.

The known physics and the tests by editorial pundits all say it won’t work. And why.

Not too many centuries ago we KNEW man could not fly. Columbus KNEW that if he sailed west he’d reach asia. We all KNEW Bear Sterns was too big to go belly-up. Perhaps we don’t know as much as we think.

Get one and try it. Tell us what you think.

I’d give it the slightest consideration if the web sites touting it were not filled with nonsense, half-truths, and outright lies. Hard to have any credibility with that as their foundation.

Set some parameters about what is suppose to do and I can better tell you if it will work.

Hey, Joe, these entries on here just say it can’t work, they don’t say why!

I’ve been told that if I put a rheostat in the line with my MAF sensor, I can get about 10-15% better gas mileage, and thats without an HHO generator. I’m not going to do that as I don’t want to risk damaging my engine. 38 mpg is enough for me.