Anyone care to have a discourse on HHO and WHY it wont give you incredible mileage?

So…I’m wrenching on someones car with a few friends present and as usual someone near me is talking out his Butt about things he knows just enough about to get him into trouble. He was rambling on about how he can generate and burn Hydrogen in his cars new system, while he drives, and reduce his fuel consumption. He explained this…he explained that…he told the other person how much it would cost to purchase and to install in his vehicle… He ALMOST had the guy sold… Until I laughed out loud, put down my tools, straightened up and told it how it REALLY was. One guy smiled and said…“I understand makes perfect sense” one guy got Red in the face and started talking twice his usual pace. The offended party is probably why I started this topic because he STILL calls me daily to try and convince me I am wrong. Oh brother… what fun ! Yesterday’s phone conversation just may have broken his spirits enough that he wont call me today. So I felt like sharing.

People seem so confused about this system of HHO… or passing an electric current through normal or “additive added” water…and producing Hydrogen gas. THEN routing said gas into the intake system of a vehicles engine, in the hopes of increasing mileage. Can you generate Hydrogen gas using this method? YES…you can. Can your engine burn the gases produced? YES…it CAN. Will it work to increase your MPG ? NO IT WONT ! Anyone care to disagree? I think I have crushed the cash strapped fellows spirits and ruined his Holidays. Just wondering what the confusion level is out here… You guys are sharp…but I bet some of the Non-Regulars still do believe in this… Lets see…

This method of " Selling a Lie" has been around since Ancient Greece and probably BEFORE then. Mix equal parts Fact…with equal parts Fiction…leave out extra information…STIR and SELL to the public. Sit back, smile and enjoy the consumption of your well crafted lie.

SO…What say ye oh Car Talk folk? Will you be buying one of these systems and try telling me that it works? Want to know why it will not? What say ye?

And I thought all that Hydrogen generating crap was debunked years ago. I guess some things will never go away.

We had a rash of HHO discussions back when gas was $$$, it’s been a while. One good source of info is over at Popular Mechanics, they’ve discussed and tested it several times: 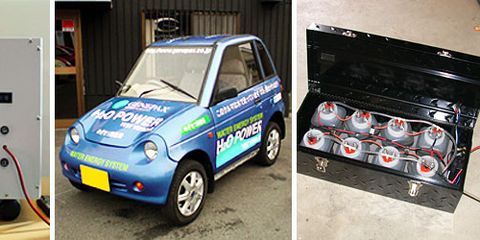 It's one thing for a car to run on air, but do the latest claims of hydrogen-turned-oxygen-turned-electricity propulsion hold wateror feed in to the hysteria of the gas crunch?

After batting down the hype over startups and DIYers claiming they could run a car on water, PM's senior automotive editor installs a hand-built HHO kitonly to find he was right the first time.

But I have a simpler HHO repellant: if it was as simple as a mason jar, 2 wires, and a rubber hose, why isn’t every manufacturer doing it? why aren’t the shelves at Autozone, Walmart, and every other car parts department lined with $59.95 kits?

Well, I’m not stupid enough to even spend one second of thought as to whether I should buy an HHO system or not.
Unfortunately, the sucker pool is deep; and getting deeper all the time it seems.

You see the same thing on eBay. People are constantly sending off money for a Craigslist car which is said to be stored in an eBay warehouse and honestly believe that 2012 low miles Accord for 2200 bucks actually exists.
Then they get upset because the eBay Buyer Protection doesn’t cover them even though the scam had nothing at all to do with eBay.

Even worse, many of them have voter ID cards…

What you should have done with that guy is have him drop by when the tank is near empty. Drain the remainder and refill with one gallon. Have him take off and follow him until he runs out.
Note the miles driven as you pass by and wave adios…

LOL…Yes the Sucker Pool is alive and well apparently. Its a shame too because this lie is actually a good one, just like I said. Mix the perfect amount of fact and fiction and its certain to Bamboozle people who have just enough info in their heads to get them into trouble. Oh you should have seen this guy trying to sell it to me…and I scientifically swatted down each proposal.

The fact is…you can generate Hydrogen gas… Your engine Will burn it… it “technically” does work. You just cant generate it fast or sufficient enough to keep up, let alone replace gasoline while driving with these contraptions. If you could you would need a physically different system to store all that “Free Hydrogen”.

Still no matter how slowly I speak or what science I apply, there is one of my buddies…(beside the recent purchaser of Snake Oil)…who really wants me to install a system for him. I flat out refused to do it as a friendly gesture…Lets see if he pushes the topic. Today I haven’t gotten my usual phone call from the first guy though…but I feel it coming…He’s educating himself at my behest. P.T. Barnum called it…

TSM I think you worked for a company that made laboratory H2 generators, maybe you can weigh in on the current draw of those generators vs the output.

If someone looks at this logically they will see that this is as bogus as it can get. Unfortunately when you discuss politics , UFO’s, 9-11 conspiracy and hydrogen generators for cars, folks who are convinced of their position do not allow facts to cloud the issue.

I use it in my vehicle, not so much to save gasoline, but it keeps my engine running cooler, cleaner and quieter. The current draw on mine is about 15 amps and is controllable. Best use when driving is in Cruise Control @ 55 mph.

To a comment made above; it is Rocket Science. HHO is the main propulsion of the Space Shuttle.

And we’re off and running…

How do you know that it runs ‘cooler, cleaner, and quieter’? Please describe why that should be the case. I can think of no physical reason(s).

HHO is actually a mixture of H2 and O2, and is a very explosive mixture.

And until they repeal the law of conservation of energy, this is a big SCAM. The energy required to create the gases out of water equals the energy released when they burn, not counting losses, such as alternator loses and resistive losses. Bottom line, you use xx joules to make the gas and you get perhaps xx/2 joules output when they are burned.

The Space Shuttle needed a center booster and two strap-ons to get aloft. The strap-on boosters used solid fuel, and the center booster used hydrogen and oxygen. But the fuel and oxidizer were not produced during ascent, but on the ground. The tanks were filled with each individually. It’s not the same as generating hydrogen while the vehicle runs. Efficiency is not important.

I can make a case for it. Everyone who is debunking it is basing their argument on the fact that it takes more energy to create the HHO than the HHO supplies when it is burned. That is an undesputable fact.

At this point I do want to insert a disclaimer. I do not have an HHO generator, I have never had one, I don’t intend to have one and I don’t think they work. I am just throwing this out for arguments sake.

Gasoline does not burn all at once in the cylinder when ignited. Gas enters the combustion chamber in the form of a mist of droplets. When cars were carbureted, this mist had a wide range in sizes of droplets and the burning was less efficient. Fuel Injection had made the droplets more uniform in size and closer to the ideal size for efficiency.

This creates an expanding gas in the combustion chamber that pushes the piston down and the gas is usually still burning as the exhaust valve opens.

Now if hydrogen and some extra oxygen is present, the hydrogen should propagate the flame front much quicker, causing more of the droplets to ignite quicker. This would build up pressure quicker and burn more of the gasoline in the combustion chamber and less in the exhaust system.

To control the vehicles speed and acceleration, you would use less gas as a result.

So in theory, the HHO does not contribute much to the combustion pressure itself, but causes the gasoline to burn faster and more efficiently.

Now if all that were true, then all those actual testing of HHO systems would actually work. But since they didn’t, then this is something that works in theory but not in reality.

Cut To The Chase. Please Talk About When And Where The Tin-Foil Hats Are Required.
CSA

"Now if all that were true, then all those actual testing of HHO systems would actually work. But since they didn’t, then this is something that works in theory but not in reality. "

Even if it worked in theory (not sure it would help, isn’t that what happens with pre-ignition/knocking?), another reason the HHO kits are worthless is the amount of water involved - burning a gallon of gas creates about a gallon of water, yet this little jar with a pint or quart of water is supposed to make a significant difference with gallons of gas. Not gonna happen.

Pile onto that the fact that 3X the amount of energy is used burning the gasoline/running the alternator/making the HHO as is released by the HHO, and it’s a lose/lose/lose proposition. Probably more than 3X…

CSA, who are you addressing?

“CSA, who are you addressing?”

Anybody familiar with using one of these devices and getting great results. Most often when extensive research and testing doesn’t substantiate any significant benefit, but a handful of folks achieve it, then special clothing, usually including or limited to thin metal headgear, is a necessary contributing factor.

I think Amos33 is suffering from a placebo effect.

That is not uncommon with many automotive miracle devices be it HHO generators, fuel line magnets, acetone in the gasoline, or any one of thousands of other snake oil gimmicks.

I use it in my vehicle, not so much to save gasoline, but it keeps my engine running cooler, cleaner and quieter.

Glad I was already sitting down.

Please Talk About When And Where The Tin-Foil Hats Are Required.

They will be needed soon, more info here: http://zapatopi.net/afdb/ But do beware, "While the underlying concept is good, the typical foil helmet fails in design and execution. An effective Faraday cage fully encloses whatever it's shielding, but a helmet that doesn't fully cover the head doesn't fully protect it. If the helmet is designed or worn with a loose fit, radiofrequency electromagnetic radiation can still get up underneath the brim from below and reveal your innermost thoughts to the reptilian humanoids or the Bilderberg Group."

this is quoted directly from: http://www.theatlantic.com/health/archive/2012/09/tin-foil-hats-actually-make-it-easier-for-the-government-to-track-your-thoughts/262998/ so don’t just take my word for it

“Anybody familiar with using one of these devices and getting great results.”

I can agree with you on that.

@amos33 if onboard HHO generation works, why isn’t it standard equipment? Car makers are tearing their hair out trying to make their cars more efficient. Here’s an easy way to do it, so why don’t they?

Answer: Because it doesn’t work.

“I think Amos33 is suffering from a placebo effect.”

Nothing Wrong With That! To This Day I Swear That Those Playing Cards That Contacted The Spokes On My Bicycle, That I Clipped On With Wooden Clothes Pins, Made My Bike Faster And More Powerful!

Anybody Care To Dispute That One?

Perhaps each generation has its own playing card power inducers.
CSA