We inherited a 1995 Oldsmobile Cutless Ciera that my kids use. My daughter ran into another car damaging the front bumper, headlights, turn signals, etc. A friend of mine was able to fix it up but now, when the windshield wipers are on and we turn on the turn signal the windshield wiper stops working because it blew a fuse. This only happens when both are on at the same time. I don’t work on cars myself but, my friend does. What can I tell him to do to fix the problem?

Ask if he could check if the wiring to the turn signals is damaged and shorted to ground.

What size is the fuse that blows out?

That should be large enough. Try testing a blown fuse that is in the socket with a volt meter by probing the test points on top of the fuse, assuming it’s a standard automotive blade fuse. More Voltage means more current, although this method won’t tell you how much current is going through the fuse unless you have some way of calibrating it. You can then find out if the windshield wipers or if the turn signal is using more current. The turn signal should only draw significant current when the light is on. The wipers should draw a lot more than a simple turn signal.

Thank you so much for your detailed response! This might be a stupid question but do the wipers need to be on when we are testing?

…also…attached to this message is the fuse diagram. I’m guessing the turn signal fuse is labeled Turn B/U even though the next page describes it as just Back up lights. 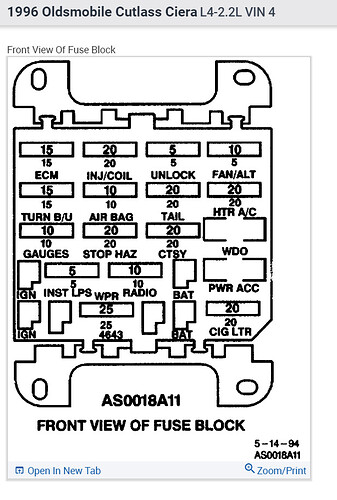 Yes turn the wipers on and off as well as the reverse lights and the turns signals when testing. The diagram shows 10 Amps but you said there is a 25A in there. You’re looking for a reading that is much higher than normal,such as turning left giving a higher reading that right, and you have to figure out what normal seems like it should be, . Has someone already tried to fix it improperly by putting in a larger fuse? All cars that I know of have a diagram in the fuse box that shows the proper sizes.

The wiper fuse is the one that blows not the turn signal. The wiper is shown as WPR on the diagram. We have followed the diagram exactly when it comes to fuse sizes.

In that case then test the WIPR fuse. Operate the turn signals and reverse lights. The turn signals shouldn’t cause current to go through that fuse. If they do then it seems like it is wired up incorrectly, as if the turn signals got connected in with the wipers.

The two circuits are not related.

So…just to be clear…operate the turn signal only (not with the wipers) to see if current is coming through the WPR fuse? If so…the turn signal is wire incorrectly?

Neveda…we’ll do that too. Thanks!

Switch on the wipers and wiggle the turn signal/multi-function switch stalk and see if the fuse blows. If it is quiet in the car, you may hear arcing before the fuse blows.

Someone else had a good suggestion that there could be a short in the multi function switch that operates these things, since both circuits go through the same area.

I hate electrical issues but it appears that it is already determined that the fuse blows, the quesrption is why? So either related to the damage or coincidence, or the damage to the light caused the damage to the multi function switch. They do wear out.

I had a bad switch tha would honk the horn on a right turn with the signal on. A little tape took care of it.

Horn turn signal! Why didn’t they think of that in first place! Thanks for your help!

Thanks for all of your help and quick responses. I’ll let everyone know what happens.

My friend thinks it might be the windshield wiper motor drawing too much power. I asked him why, if it were that, wouldn’t the fuse blow with just the wiper going.He also said that he knows of a salvage place that will sell him the motor but he thinks, if we need a multi-function switch, the salvage place will want to sell the whole steering column, so we may have to buy new for that one. Any thought about either of those comments?

Unlikely to be the wiper motor, for the reason you say. My guess is a short in the multi-function switch, that’s where the two circuits have places they could short to each other. Accident may be unrelated, or perhaps driver was holding on to the switch’s lever at the time of the accident, inadvertently broke it in the process.

I guess if I had that problem I’d disconnect the battery, then use an ohm meter to see if a low-ohm electrical connection between the two circuits occurs when the multi-function switch is set to the position you’ve discovered causes the fuse to blow. Before doing that I’d do what Tester suggests above, carefully inspect the turn signal light bulb fixture for damaged parts/sockets/wires in the accident area. Seems unlikely to be the cause, but might turn up a clue anyway. Best of luck.