Last weekend I removed the upper intake manifold on my 2005 mustang gt to replace the upper intake gaskets due to lean codes which were caused by a vacuum leak that I found using carb spray.

I took this attached picture while I had it out and saw that 2 of the hoses look pretty worn. I also saw dried green stuff (presumably antifreeze) that was caked on - not a liquid/fresh - to the metal part where the upper intake sits on so it looks like it’s not recent.

Are the 2 hoses I circled in red coolant hoses or air hoses? The reason I ask is because I looked very carefully at both hoses but couldn’t find any fresh coolant or moisture on them indicating a fluid leak. However this is contradicting the green fluid I see which appears to be old dried up coolant.

I thought it was possible the previous owner of this engine maybe had one of the hoses leak and then replaced it which explains the old dried coolant but judging by the condition of the 2 hoses I circled, they look like they’ve never been replaced. But if they’re not leaking and they’re original, then where would that old dried antifreeze be coming from?

I had driven the car for an hour just before doing this repair so if those hoses were leaking right now I would have noticed liquid coolant not dried coolant that looks like it’s been sitting for weeks/months.

Engines never overheated or ran even slightly hot since it’s been installed. I’ve checked the coolant reservoir and oil 1-2 times per week since I got the engine installed 2 months ago and I’ve never had to top off either so it’s not loosing coolant internally or externally. Seeing this was just puzzling so I thought I’d ask about it here and see what anyone thinks. 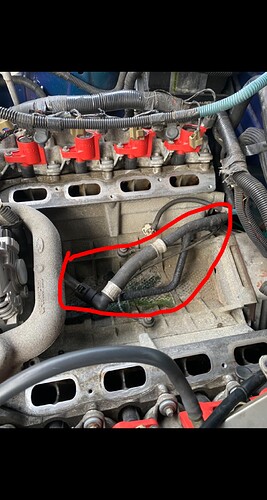 I suspect the quick-connect O-ring has been seeping.

You can find a replacement under “heater hose” at Rock Auto. 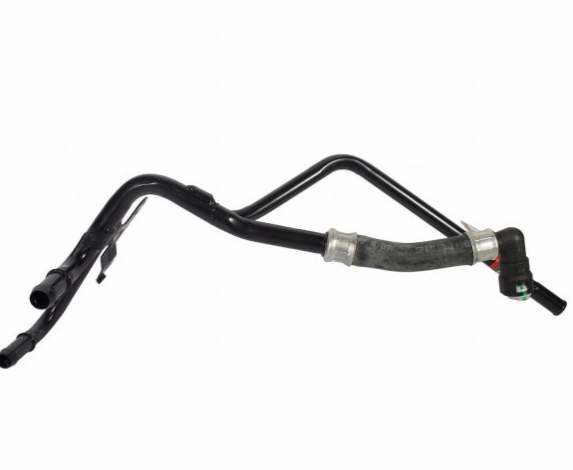 Are those heater core hoses?

Let’s call them cooling system hoses/pipes. You can follow them to see where they lead to.

I know i really ought to get around to replacing it asap but theoretically, as long as I’m regularly checking the coolant reservoir level I could keep driving like this until the leak actually becomes substantial? It’s been this way presumably for months and I’ve lost no noticeable amount of coolant.

Or would I risk oil contamination or some bigger problem like that?

The leak isn’t internal to the engine so a leak can’t contaminate the oil.

Do those hoses go under the plastic intake manifold, or just set on top of it but it’s removed in the picture? If they go under it, I’d definitely do it now. Probably best to do it anyway. If the plastic quick connects or elbows let go all at once, you’ll lose a lot of coolant fast and risk overheating the engine or having to get towed.

GM has some funky plastic coolant elbows and quick connects too. I’ve replaced them because of leaks on my 2 GM’s already. Better to do it when it’s a seep rather than wait for it to be a gush, my thinking.

You’re right. And they go under it unfortunately. It just puzzles me why i didn’t see any fresh coolant and just old dried coolant if there is a leak. The leak wouldn’t just fix itself

Is that green stuff even coolant? I’ve never seen dried coolant usually it would evaporate or just burn off not cake on like that

It may leak at the quick connects only at certain temps during warm up or after it’s shut off or something…? Probably a rubber o-ring or similar inside the connector is shrunken/dried out. If you’ve got green coolant in there, I’d say it’s probably dried up coolant. If you’re using orange coolant, I’d have to punt lol.

Are both the hoses I circled in the photo coolant hoses?

Are both the hoses I circled in the photo coolant hoses?

I don’t know. Appear to be from what Nevada posted. I’d look on rockauto, like he mentioned.

Should be fine if you just drain down to below the level of those hoses, which is pretty much going to happen when you take the hoses loose.

I know i really ought to get around to replacing it asap but theoretically, as long as I’m regularly checking the coolant reservoir level I could keep driving like this until the leak actually becomes substantial?

This is y our car, you could do whatever you want. Now is the best time to replace those hoses, though, as you already have access to them, and as has been said: you do not want them to rupture. Also, its not fun to have to tear this apart in a couple weeks for something you could have fixed when already apart.

Is that green stuff even coolant? I’ve never seen dried coolant usually it would evaporate or just burn off not cake on like that

Does your vehicle have green coolant in it? Then yes, this is coolant. and that is pretty much exactly what dried coolant looks like on a hot engine.

Put something under the engine to collect the coolant when you remove the hoses. Antifreeze is poisonous and a pollutant. After you move the car, a dog or other animal might lick the spot and die.

I did the job myself but it was at the mechanic. I had it there to do a diagnostic for the engine running lean and he figured out it was the intake manifold gasket. I originally had no idea about finding this leak and did not expect to find it since the car hadn’t been overheating or losing coolant.

Other than charging me for the diagnostic, he let me work on it myself in his garage free of charge using my own tools (I saved myself a few hundred dollars) and before removing the manifold I went and got the new gasket at the nearby parts store and by the time i got back and had the manifold off it was getting late and I had to go home soon and didn’t have time to put everything back together, go find the correct hose and then come back, take it off again and install it again

I preferred to work on it there because i’m not a mechanic I’m just a DIYer and in case i got stuck on something he’d be right there to help me real quick vs me doing the job at home.

So now I’m going to have to take off the manifold again which is why I wanted to check here first to see if it was really necessary since the cars been running fine (no overheating, no noticeable coolant loss) but it sounds like in this case and in many cases prevention is worth way more than a cure

If it’s back together and runs good, I’d probably let it go, to be honest. You wouldn’t have known there was an issue if you hadn’t taken the manifold off. Pretend you don’t know about it if you can. It would drive me nuts in an OCD way lol.

There might be a way to replace those hoses without removing the intake again. I’m not sure, but the quick connects are usually there for ease of (original) assembly. Seems like maybe you could thread the hoses through without disassembly, but I’m not standing there looking at it. Maybe someone familiar with that engine will chime in.

EXACTLY lol. That dried coolants probably been sitting there for months or possibly even a year or more. It’s just now that i know there’s a very slow leak it’s making my OCD crazy. Knowing there’s a potential problem and wondering whether or not it’s going to give out tomorrow. I might just suck it up and do it again