I hate that I have to baby my 96 mustang

I fixed up a mustang that has been sitting for 2 years had water damage during the Florida hurricane (yes I know not to buy flooded cars) but there was no water in the engine so I bought it.

I changed alot on it,new clutch, radiator fan,after market cold air filter,coolant sensors,and thermostat,but now is running I want to be a stereotypical mustang drive and do burn outs but when I hit the gas too hard the radiator hose keep snapping,I’m not going too hard on it ,just a fast leave on a stop light makes the hoses burst, first the heater hose going to the coolant sensor burst open getting coolant all over the engine, bought that, installed it,then took it on a open road and went moderately fast and the radiator hose going to the thermostat snapped open overheating the car and having to clamp it back and slow craw drive it home,what could it be,other than my driving?? Too much pressure?? Incorrect thermostat installation??

No it is not your driving. My guess is either there is a blockage somewhere in the cooling system.
Or, possibly, but highly doubtful, motor/transmission mounts are allowing the engine to shift enough to snap the hoses.

Wasn’t sure from post, did you replace the radiator? Or just the fan?

Have you had the same hose fail more than once? Maybe they’re all just old hoses, and you should replace the ones you haven’t yet replaced.

I agree with @Whitey. 22 year old rubber parts are bound to need replacement.

I have trouble understanding this. Yes, the hoses are old, but the stress from driving, even lead foot driving, is not that great, I think less than if you grabbed the hose (when cold) and push/pull/twist it.

I’m going to say the hoses are 20+ years old and have probably seen better days. Could also be a bad motor mount. Get someone to rev the engine while you watch the engine, if it moves up or down or shifts noticeably then that may be your problem, but bad hoses are more likely.

I guess “fast acceleration” is relative

Here’s what I think- you may have a bad head gasket or other such significant breach from combustion chamber to coolant system. It’s about the only reason I can see that you’re “bursting” hoses. Start the engine and squeeze the upper rad hose, is it rock hard or can you squeeze it a bit?
What about with the engine off, is it soft, pliable and easily squeezed?

…and for some reason the radiator cap is not releasing pressure into the expansion tank.

…and for some reason the radiator cap is not releasing pressure into the expansion tank.

Where did you see that?

Are you saying this could all just be a defective radiator cap? Putting on a new one sure wouldn’t cost a lot.

If the (possible) head gasket leak is putting combustion pressures and gasses into the cooling system, the rad cap should release pressure when it gets to, what 15 PSI or so? If the rad cap does not release, the pressures in the cooling system build until something else lets go. A hose coming loose, for example. Not good, but neither is a burst radiator.

The head gasket possibility needs to be carefully considered. I agree with Twin Turbo.

Ah, I see. This has raised another possible cause: a defective radiator cap that doesn’t release pressure. Given that a new radiator cap for this car would cost between $2.50 and $6.00, that’s where I’d start.

Another vote for a radiator cap and just my 2 cents I’d change the thermostat. I’m of the opinion that a thermostat is a maintenance item that should be changed every so many years. It’s better than risking one sticking closed while a 100 miles out in the sticks.

The engine does wiggle a bit when reving

Okay, if there is a radiator shop in your area you might be able pull it out and have them flow test it. The radiator may be clogged.
Normal for engine to wiggle a little, if it lifts up then there is a problem.

Another idea, when you step on the gas the engine twists enough on its mounts that it something is tugging on the hoses too much. i.e. the engine twists, but the radiator and firewall (which coolant hoses connect to) don’t. Something has to give. Rev the engine in the parking lot with the hood up, see if you can see this type of movement tugging on the hoses when quickly accelerating the engine from 800 rpm to 2500 rpm. If so, either you need longer hoses, or some of the motor mounts are shot.

I fixed the problem,it was a combination of a thermostat they won’t open and a clogged radiator. 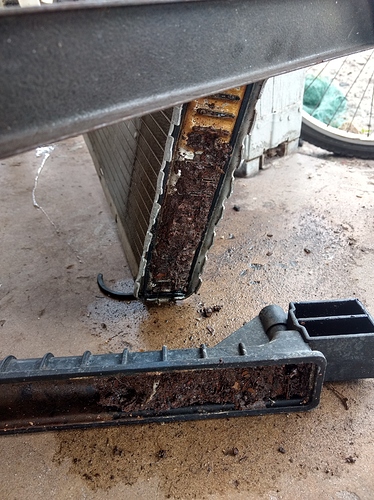 Well, that’s one heck of a mess. Swamp thing…

Yep,it was full of metal, hopefully not from my engine and the last owner bought it used from a different car that has a damage engine

That radiator is full of rust, debris from the cast iron block due to poor coolant or water only being used in the engine.