True stats, but the shooter was subdued not by a gun but by physical force and Cavell specifically asked about Club Q.

… and he stated the following, so a discussion of gunfire–by untrained individuals in a confined setting–is highly relevant. I somehow doubt if he meant that the armed perp (who was wearing body armor) could have been easily killed with high heels or bare hands:

Why did club Q patrons not kill shooter? They easily could have.

Then there was the kid in Indianapolis that dropped the shooter some distance away on the first shot. You can’t just qualify at the range once a year. Just getting a permit doesn’t do it. Practice practice. I would guess though that no one was armed at the club.

I just notice how none of these proposed methods to reduce catayltic converter theft actually involves actually catching the thieves in the act or shortly after the act and putting them behind bars for a long time.

How about putting a silent alarm under high risk vehicles that notifies the owner or the police? Nope. How about setting up an under cover scrap metal buyer that pays slightly higher prices than the competition to catch who is selling the converters? Nope not being done. How about having the police actually park high risk cars in high risk areas that are fitted tracking devices in the converters? Nope not happening. How about not punishing regular citizens when they try to stop a thief? Nope that’s not PC.

How about selling a new security product which makes a would be thief steal a catalytic converter from the next vehicle instead? Great idea it’s already being done!

I just notice how none of these proposed methods to reduce catayltic converter theft actually involves actually catching the thieves in the act or shortly after the act and putting them behind bars for a long time.

You could join your neighborhood watch group and look after these vehicles overnight, the police do not have the staff to monitor parked cars.

They want to put identifying marks on the converters so that they can be recovered later on. Nobody wants to actually catch the thieves.

How about putting a silent alarm under high risk vehicles that notifies the owner or the police?

You could market such a device.

How about setting up an under cover scrap metal buyer that pays slightly higher prices than the competition to catch who is selling the converters? Nope not being done.

Your city or county buying catalytic convertors from thieves without proof that these are stolen? Who profits? Identification numbers will prove the origin of the stolen property.

You could market such a device.

The general selfish attitude is that people want a fake sign that says “protected by such and such security system”, without having to go to the trouble of actually having the security system, to make the thief move on to the next target instead. Few people are interested allowing the theft to occur so that the thief is actually caught and put behind bars.

I think that Mike was referring to the fact that trained police officers–on average–hit their intended targets less than 20% of the time. A less highly-trained individual is likely to have an even lower success rate, and is very likely to hit innocent bystanders, especially in a very crowded space where people are panicked.

Exactly. Unfortunately, I HAVE shot at someone trying to kill them in Vietnam. Even under those circumstances it wasn’t an easy thing to do. At times we had to refrain our fire for the fear of hitting children (the preferred hiding spot for Charlie).

ust getting a permit doesn’t do it. Practice practice. I would guess though that no one was armed at the club.

Just practicing over and over at a gun range doesn’t make you proficient in killing someone. Unless you’ve had to do it - you have no idea how hard it is. Even if they are trying to kill you. I was lucky that I only saw limited action because I was there at the end of Vietnam. Many hardened Vietnam vets have PTSD. Even Audie Murphey suffered from PTSD.

I imagine that any junk metal dealer who might be buying a lot of catalytic converters from the same folk would not be deterred from buying a probably stolen one, as they most likely are undoubtedly acting as a fence for stolen cats…

My son who drives a biggo Dodge Ram Van was shopping at a Walmart and since his van is so large, he usually parks a bit away from the entrance. He was coming out with his purchases and it was around two in the afternoon, no less, and he saw a car parked next to his van and there appeared to be someone under his van.

He figured it was a cat stealer so he started yelling for the Police and to everyone within earshot, “They’re stealing my catalytic converter, someone call the police, someone photograph the car.” And other stuff, and he stared waving his packages around as he headed for the van.

That scared the cat stealers and the car took off, but the guy under the van was not fast enough and he was left in the parking lot and he took off running.

When my son got to his van he found that the exhaust pipe was only part way cut through and the guy under the van left the sawzall. The sawzall was a cheapie and not worth much, so he took out a hammer and smashed it and left it in the lot in case they returned…

He took the van to a service station had the pipe fixed and then went and had a chain link fence cover welded over the catalytic converter so if someone tries it again, it will not be so easy…

Later, when we talked about it, he admitted he probably should have turned the sawzall over to the police as there might have been fingerprints on it, but he was too pissed to think straight at the moment…

And someone probably ran over it and lets hope they did not damage a tire or their vehicle .

I’ve known guys that have caught thieves in the act, messing with their car . . . and they’ve beat them senseless

Oh wow, what a surprise to have Vovo hunt me down again and post snide remarks about my posting. I do not know if my son was more upset about having his van vandalized or Vovo on the content of my posting…

It wasn’t too long was it? I wasn’t trying to hijack the topic was I? It wasn’t off topic was it?

Actually, I was thinking of you went I posted this, not wanting to offend your delicate disposition with any of the aforementioned infractions you have so often complained about in the past…

For all others, I did ask my son if he dumped the sawzall in the middle of the lot and he said no, he said he dumped it next to one of the lampposts, near where he was parked and I most magnanimously apologize to all for not including that fact in the original posting…

But I imagine that you (Vovo) would have picked up the sawzall and taken it to Lost and Found Department at Walmart and skipped back to your vandalized car, merrily singing, “Hi ho, hi ho, it’s off to the mechanic I go, I go…”

I expect the folks who are sawing the cats away from parked cars know fully well what they are doing is morally wrong. If you accept that premise, then it comes down to the punishment question. I’m inclined to give the benefit of the doubt for someone caught stealing a single cat the first time; say a small fine provided perp pays P&L replacement cost to the owner of the stolen cat. If caught with more than one stolen cat, or if a repeat offender, seems like that would call for a minimum of 2 years in jail. Third offense, 10 years in prison. I expect the problem is the justice system is unable to differentiate between first time petty-theft offenders and criminals who repeat their offenses.

Again the sheriff believes these are organized gang fencing the cats out of state. Similar to the high end smash and grabs at retail stores. These are not poor people trying to feed their families. It is similar to the mafia. Requires federal action not local fines. All this wringing of hands will have little effect until the feds get involved when they are not busy.

If the perps were involved in a multi-cat theft scheme, & decided they could get away with it w/out much risk if they frequently move from state to state, taking advantage of the “oh, he only stole one cat sentiment”, then you are right, at that point it becomes a federal law enforcement problem. Even if feds catch the perps, no guarantee they’ll ever wind up in jail. Case reported over the weekend (not related to cats) , IIRC perp didn’t show up for court sentencing hearing, disappeared for many years, only recently found in Singapore and extradited back to USA in past couple of weeks. So cat theft could actually become an international law enforcement problem.

Perps, using these sort of methods, have certain advantages. Reminds me of fictional detective Hercule Poirot, who claimed from time to time if he had a criminal mind-set, with his crime-stopping expertise, he’d be able to easily get away with a lot of crimes.

I reviewed the county court records of one of the local thieves, during the last 15 years he was charged 9 times with theft related and solen vehicle charges plus numerous drug charges.

The most recent was a charge of possession of a solen vehicle, January 2022 pled guilty to attempted possession of a vehicle. Sentenced to 14 to 30 months in state prison, sentence suspended, placed on probation for 18 months. 33 days later caught with 15 catalytic converters in the back seat of a car.

There will always be dopes to steal the car parts. There is a never ending supply or children that grow into criminal activity. IMO the real problem is getting at the leaders that initiate the activity. Shiver is caught stealing catalytic converters deserves punishment. Putting them in minimum security prisons if they aren’t repeat offenders makes more sense that housing them with hardened criminals.

[Repeat offender cat- and car-thief] Sentenced to 14 to 30 months in state prison, sentence suspended, placed on probation for 18 months. 33 days later caught with 15 catalytic converters in the back seat of a car.

Sort of makes a person wonder what’s wrong w/the criminal justice system? Other repeat offenders are aware of this presumably, so they see no reason to stop their illegal activity. If the judge made an error, seems like judge would lose his job. But I’ve never hear of a judge losing his job b/c he made an error except by the occasional recall election. If the problem is there’s not enough jail space … what’s the solution to that problem? At this point seems hard to disagree that the gov’t politicians’ plan seems to be to allow the thefts to continue unabated.

Prisons are full. Where you gonna house them? We could build more prisons, but few communities will allow that.

This New Article came up on my Phone’s News App. I’m hoping for some real justice… 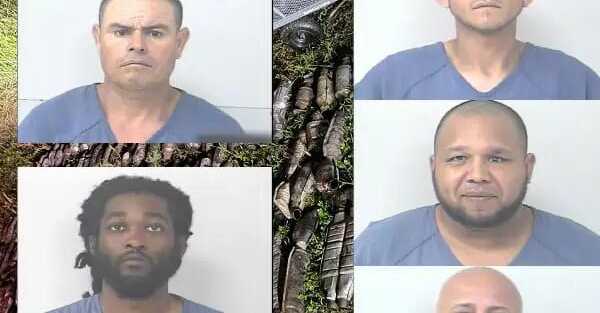 Deputies have arrested five suspects in connection to a large-scale catalytic converter theft operation, which occurred near the 2600 block of Center Road in Ft. Pierce on Thursday, November 24, and Friday, November 25, 2022. According to deputies,...

I’ve been mostly offline since the holiday (sorry) but please be careful with this one. It’s like a greatest hits medley of all the topics that start fights around here. So far it hasn’t derailed, but who knows? Thanks.