This could reduce the incidence of Catalytic Converter thefts

This scheme apparently involved perps in CA and OK, in addition to NJ. 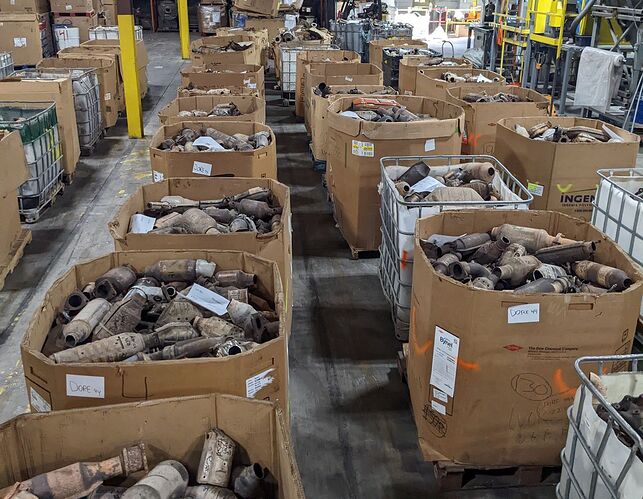 Cali and New Jersey. And of course MN is involved. We like immigrants in MN. Asian or Somali. We welcome all. Seems like they are clever. Cats and fake school meals. Serve 3000 meals a day in 2nd floor apartment? Sure.

We just had several people arrested in a suburb of Baltimore for stealing catalytic converters. While a much smaller scale than the processor in the article, they were attributed with 45 thefts.

I read that article a few days ago

I would love to see an examination of the exhaust with, and without, a catalytic convertor in a 2022 civic. I would not be the least bit surprised if the “difference” is a “parts per million” measurement.

Honda’s CVCC technology was so clean they passed emission standards without a catalytic convertor.

I’m calling BS on the incredibly simple part. Here’s your simple vacuum diagram from a 70’s civic. Give me a catalytic converter over this f’n mess any day! ! 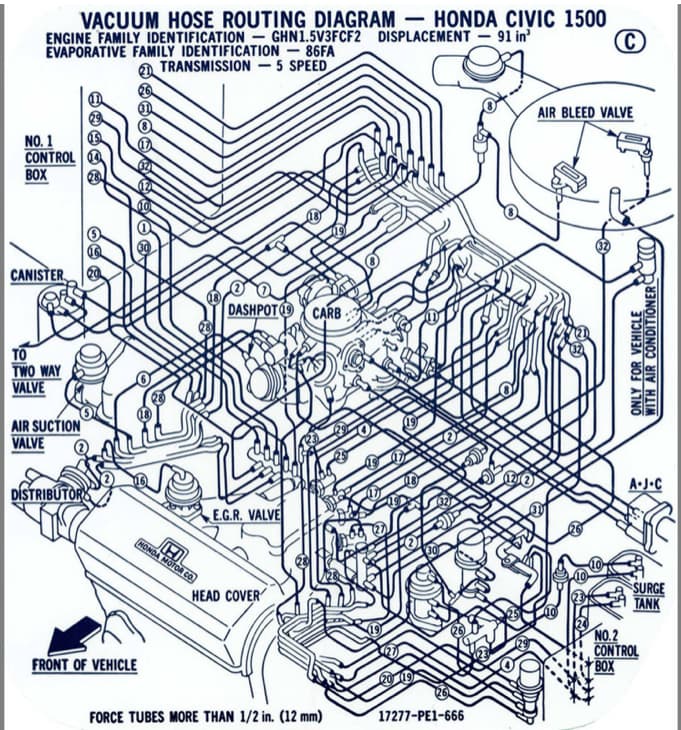 I could disassemble the engine with a 10mm socket and a screwdriver…lol…nothing “electronic” and no expensive special tools. Access to all parts was simple; no buried starters or water pumps…plenty of room to get it there and fix things.

Vacuum had a lot of uses in the 70’s…cruise control, ignition timing, fuel ratio, emission, AC…a vacuum leak was a nightmare! Been there, done that. Could cover the carb opening and engine kept running:)

Do you have the vacuum for 2022…how about wiring…that would be a show.

Here’s is the vacuum diagram from my old 2002 Camry 4cyl. now this is simple. And I have the wiring schematics, they aren’t they are worse than in the 70’s, but all in all not daunting.

And then there was the Honda “magic box” in the upper left corner. I don’t think anyone knows what vacuum vol-do goes on in that. 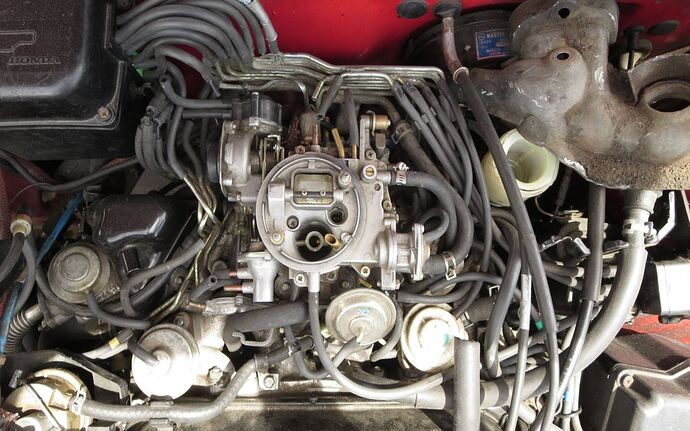 LOL! Forgot about that! Ah, the memories, pretty sure I threw it away at some point.

The alternator failed, couldn’t afford a new one, so I just charged the battery every night. Driving in the dark really shortened my range:(

… and a LOT more safety features, plus a whole lot more comfort for the folks riding in it.

10% improvement, seems like a good improvement. Bizarre vacuum diagrams from the early 70’s, deal with this w/ my 70’s truck. Desperate Ford engineers were using the engine vacuum system to tweak this and that to get their trucks to pass federal emissions requirement. Main problem seems to be to reduce emissions during warm-up. They didn’t have a lot to work with, about the only thing they could do is increase the intake air temperature to turn the choke off asap, and modify the ignition timing. Even with all that, the truck’s vacuum diagram doesn’t even come close to approximating the complexity in @PvtPublic 's above diagram.

Speaking of fuel efficiency, here’s a puzzle. I’ve been bicycling more to save on the high price of gasoline. Increased miles from 20 to 40 per week. I power the bicycle with what I eat, but I don’t seem to eat any more now than before my bicycling mileage increase. So what’s powering the extra 20 miles per week?

Yup!
Those Medusa-like vacuum lines on the old Civics were a nightmare for many mechanics.

Approx. 2000 converters stolen in Tulsa last year and one of the guys arrested has a dozen prior felonies along with several dozen misdemeanors, traffic tickets, and so on.
Also appears to have obstructed cops, impersonated a cop, and used police radios in the commission of felonies; and as usual…out walking around adding to the crime total.

A frequent flier on LEO Airlines…

Well the 2022 Civic may only get 3mpg more, but let’s compare hp and torque figures.

Plus the 2022 rides nicer, is roomier, has more safety features, and requires less maintenance. I would say that tripling horsepower and more than doubling torque while improving fuel efficiency in a far heavier vehicle (1500 vs 2877 lbs) is indeed massive progress. No eye roll necessary…

You don’t have to compare the 1975 Civic to a new Civic to see that it’s obsolete, even compared to a 1990’s economy car. The 1975 Civic is underpowered, difficult to maintain, offers a spartan interior, and lacks even the most basic safety features. I don’t think too many people would want a 1975 Civic right now, even if it’s in excellent condition and runs well.

I totally agree. I was just responding to STZ’s assertion that somehow the modern Civic, with all of its computers, was only marginally better than a 70’s Civic with the CVCC engine because it “only” got 3 mpg better fuel economy. I loved those late 70’s and early 80’s Japanese cars for their ingenuity, but there is no way I would give up my modern car for one of them.

one of the guys arrested has a dozen prior felonies along with several dozen misdemeanors, traffic tickets, and so on. Also appears to have obstructed cops, impersonated a cop, and used police radios in the commission of felonies; and as usual…out walking

Maybe he’s the Yellowstone NP guy I saw on tv last night. Misbehaving tourist, he got arrested the prior day for drunken behavior at a restaurant IIRC, let loose, then promptly heads to parklands, gets out of his car when moose bison comes walking by, walks toward moose bison as if to make acquaintance. Moose Bison being wild animal doesn’t take to this idea and runs toward guy to scare him off. VDO of moose bison incident surfaces, viewed by park rangers, who again arrest him.

Now I think about it, wasn’t moose, buffalo instead.