What do you folks think? Does this have much chance of helping with the catalytic-converter theft problem? 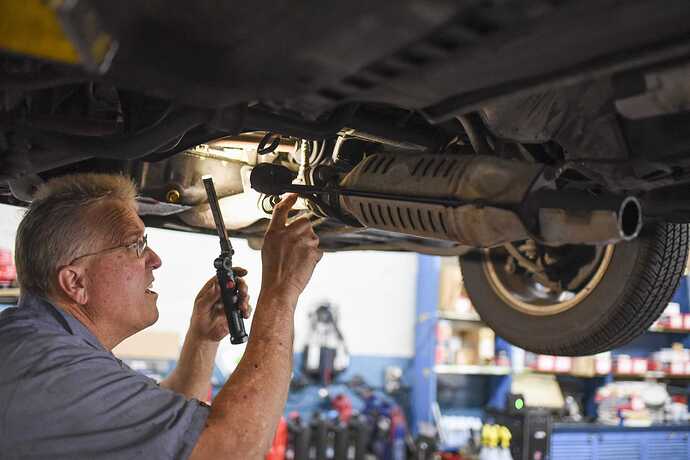 This Bay Area police department is giving away free kits to protect catalytic...

Can’t see it. Not too late, most cars still have their cats. No idea if it actually works, though.

I presume you mean you can’t see the newspaper article link for some reason. Here’s another non-newspaper version.

San Mateo residents are eligible to sign up and receive CATGUARD, which is catalytic converter deterrent device

Nothing wrong with it, kind of like getting your dog/cat ‘chipped’. Not sure how much of a deterrent, but seems pretty simple.

If it works and more efficient than other ways to prevent cat theft, then it seems ok. But imo, it seems like the thieves, being a clever sort, would quickly figure out a work-around.

I just don’t see this as doing much. St. Paul was just painting them. Kinda like the signs saying your house is protected by such and such security system. Thanks for the info, checking manual on how to defeat system. Seems to me you have dismantle the cats to harvest the metals so I wonder how many would be intact at the junk yard. Dye packs would be fun to see.

Yes it is like the home security systems. The thieves just move on to the next vehicle that doesn’t have the enhancement. After every vehicle has one the thieves just learn to get around it and things go on as they did before. The only people making a profit out of this are the thieves and now the security company in addition to the thieves.

One way was to put a metal cage around it but unless the thing is six feet long, they’ll just cut the pipe off farther back. A garage works pretty good but all those park and rides that the gov likes to build are a gold mine for cat thieves. Lots of cars to choose from, they know you won’t be back for eight hours, and no one around. Here ya go folks, we created the problem but here’s a sticker to help. Oh that’ll be fifty dollars sir.

The solution is to jail the buyers of stolen convertors. Require ID of sellers, don’t pay them cash, and to punish each link in the chain when caught.

The ID numbers will assist in getting a conviction. Giving away 500 kits is only planting proof to help law enforcement, to help vehicle owners, 50,000 kits would make a difference.

When 15 catalytic convertors are found in a car trunk during a traffic stop this indicates this person is a thief, however how do they prove the cats were stolen?

Well gee I dunno. A few years ago a deputy stopped a guy that had a large spool of wire strapped on the trunk. Probable cause. Guy went to jail. Do you have a receipt for that wire?

Was he convicted of theft? Did the public defender get him off with a plea deal (no time served)?

Do you have a receipt for that wire?

The police must produce evidence he does not own the wire. This is why catalytic convertor theft has gotten out of control, the police cannot link the stollen property to victim.

Some guys stole a tree in a large concrete planter next to a pool at a hotel i worked at. guys got pulled over as it was sticking out of the trunk.

How much time did they serve for theft? They were likely released the next day to begin catalytic convertor theft.

Sorry to say it but until the profit is removed from the resale of stolen cats, there will always be some morons and/or junkies who are willing to risk life and limb for a quick buck.

Several years ago these morons were stealing copper gutters and pipes from homes and even went so far as to steal aluminum street light posts until the State cracked down on the scrap buyers.
Yeah, there was a great wailing from the scrap buyers about “Government interference in their legitimate business” and “How was I supposed to know it was stolen?”, until a few of the scrap buyers were dragged into Court on recieving stolen goods and then it mostly stopped.

Bottom line, if you can’t sell it, why steal it?

The etched metal can be ground to remove the serial number or maybe acid etched to obliterate it. If the catalytic converter is disassembled to harvest the rare earth metals the serial number can be completely removed by grinding away the area that the number is etched on.

True, but if you’re in possession of a tampered converter, then you’re guilty and fined appropriately. I also think going after the buyers will yield the best results. Eliminate the source of funds for the thieves and they’ll stop doing it. Hold scrap business accountable for their purchases…

Not sure how much of a deterrent,

That pretty much sums it up

It will NOT stop the theft

And even IF the stolen cat is tracked, what good does that do the victim

Any number etched onto the cat will be on the shell . . . not on the honeycomb, which is what the thieves are ultimately after

Sorry to say it but until the profit is removed from the resale of stolen cats, there will always be some morons and/or junkies who are willing to risk life and limb for a quick buck.

I have to partially disagree

This is well organized

And the stolen cats are worth a LOT

It’s not just tweakers looking to score their next hit

The metal recyclers have websites that instruct would-be thieves which cats are the most valuable, how to identify them . . . and most importantly, which cats the recyclers WANT

Maybe I’m wrong but seems to me a stolen cat can be easily identified because it was cut off not unbolted. When I replaced mine I unbolted it and unclamped it. The only thing a marker would do maybe identify the original owner and a theft report. Years ago we did operation I’d and etched the number in items with those warning labels. I don’t know if it worked or not but never had anything stolen or recovered. The program just seemed to have died. I suspect the police have other priorities.

When I was a kid I had my bike stolen outside the theater. A week later the police found it in a ditch with my license plate on it. I had already picked out a new three speed to buy with the insurance money but instead I got my old bike back. I guess I would have had to pay back the insurance money but the police did a good job. Who wants an old laptop back after three months?

Our neighbors in the apartment next door were robbed one night when they were gone. I noticed the blue 53 Chevy in the parking lot with the guys putting stuff in the car. I located the car in front of a residence a few days later and informed the police. Even in our little town the police did not have probable cause to search. Insurance paid for the lost items anyway.

So I dunno excuse my unenthusiastic attitude about putting labels on cats. In some states it is not a crime until you steal more than $1000. Just shows there is an unserious attitude to broken windows. All those folks stealing purses and item from stores end up selling on eBay and Amazon,yet folks like to buy their stuff. Not much different than the junkyard buying cats.