The solution is to jail the buyers of stolen convertors

Makes good common sense. The problem is the USA’s justice system seems unable to do that. For example the CEO convicted of making misleading statements to investors and patients alike about the accuracy of the company’s blood testing product and sentenced to 11 years prison, remains out on bail pending appeal, and appears will remain free, perhaps indefinitely.

Good sense if you can find the criminals. The ones cutting the catalytic converters off are arrested but the guys that organized the thefts remain untethered. I know a long time public defender. He says that the criminals he deals with are low level and often don’t understand what they got themselves into. The organizers are rarely caught. They just hire more people to do the dirty work and take the profits.

These folks don’t understand right from wrong then? Seems implausible.

Entirely plausible. The guys that get talked into breaking the law are not especially bright. The top dogs may be as smart as you are but the ones doing the dirty work are not.

Must be a reason for the timing but an article in the paper tonight warned of an uptick in local thefts. I think we are up to four now. The sheriff said though that the thefts are part of a ring and that they are transported out of state for processing so the local recyclers never see them. Once you cross state lines though the fbi has jurisdiction. They might be kinda busy right now but maybe they’ll put their dogs on it to bust up the ring.

These folks don’t understand right from wrong then? Seems implausible.

I know people who are told TO THEIR FACE “Don’t steal that” . . . and then they just do it, anyways

Sadly, I suspect some of it has to do with upbringing

After talking to some of these guys, it turns out their role models growing up weren’t particularly honest . . . and I’m being kind, the way I worded it

Maybe I’m wrong but seems to me a stolen cat can be easily identified because it was cut off not unbolted.

A freshly cut off catalytic converter would leave no doubt in a policeman’s mind that this was stolen. The thief pleads 'Not Guilty", now the county court must prove this is solen property. Where was the property taken from?

The only thing a marker would do maybe identify the original owner and a theft report.

That would complete the story.

If the sheriff is correct and they are being transported out of state, it is a matter for the FBI and not the locals. That would be interesting.

Not to mention that other thefts of retail stores that seem to be organized gangs, selling out of state. Rico maybe?

Does farmer have more animals in barn after cow leaves? I’d close door then.

We already have plenty of Local and State Source Tracking laws on stolen goods (Pawn shops, Used vehicle & Vehicle Recylers) and Precious Metal Scrappers but to be effective they’d have to be expanded and applied nationally, which would cost money (taxes) so until the problem becomes more than an “annoyance” for the owners and insurance companies who are paying the bills, it’s doubtful that anything will quickly change.

Probably just in time for EV’s, which don’t need Cat’s, to reach 50%+ of the national fleet.

Well gee I dunno. A few years ago a deputy stopped a guy that had a large spool of wire strapped on the trunk. Probable cause. Guy went to jail. Do you have a receipt for that wire?

I’m sure there’s a lot more to that story. Probable cause for arrest. But NOT conviction.

What does this have to do with discussion of theft/possession of stolen property crimes, including catalytic converters, copper pipe/wire, etc? The kind of laws and policies which will deter opportunistic thieves or even organized crime rings have NOTHING to do with trying to prevent mentally disturbed individuals from carrying out mass murder/domestic terrorism.

Maybe I’m confusing the event, but I think the former army major tackled the guy and began wailing on his head with the preps own hand gun until the perp was not moving. The major said he was afraid he had killed him but was released after an hour in the squad car. But yeah doesn’t have much to do with cat thefts.

If someone is stopped with a trunk full of converters with saw marks on them, it is pretty easy to make a case for receiving stolen property. The perp is not affiliated with a repair shop and can’t verify where they came from. A jury of their peers can readily conclude beyond a reasonable doubt that the perp knew they were stolen. But most prosecutors will plead that out if the perp tells who is buying them.

And no matter how stupid the perp is, they KNOW they are comitting a crime. Don’t delude yourself that thinking someone coerced them into crime. Most have long arrest records going back to childhood.

Serve on Grand Jury duty for a few months sometime if really want to learn the real story.

If someone is stopped with a trunk full of converters with saw marks on them, it is pretty easy to make a case for receiving stolen property.

Sure, but in some jurisdictions now, even possessing one used catalytic converter, which was unbolted and still in good condition has been criminalized. I am not sure how those laws will hold up in court, and also question the legality. It is one thing to deter and punish thieves, it is quite another to criminalize buying/selling/possessing used auto parts.

Probably because the bar was very crowded and there would have been a very high probability of shooting/killing another innocent person.

The shooter was tackled by a retired military man and being stomped on his face by a transvestite in high heels. Low risk to innocents, very high risk to the shooter!

Probably because the bar was very crowded and there would have been a very high probability of shooting/killing another innocent person.

The shooter was tackled by a retired military man and being stomped on his face by a transvestite in high heels. Low risk to innocents, very high risk to the shooter!

I think that Mike was referring to the fact that trained police officers–on average–hit their intended targets less than 20% of the time. A less highly-trained individual is likely to have an even lower success rate, and is very likely to hit innocent bystanders, especially in a very crowded space where people are panicked. 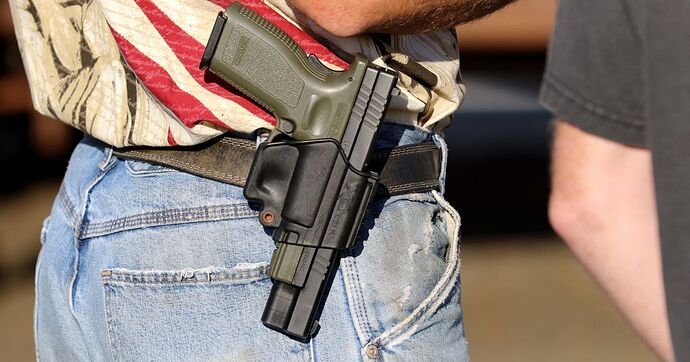 In gunfights, trained officers have 18 percent hit rate. Yet, we want to arm...

Does it make sense to arm teachers to stop school shooters given that even police show low odds of hitting targets in gunfights?