Hello everyone!
I have a 2009 Santa Fe Limited and passengers on the back seats cannot open or close the windows. However as a driver I am able to open/close the windows. What do you think might be the problem?
Thank you!

Is the window lock activated ?

no I tried that…

first look for a blown fuse, then look for broken or damaged wires in between driver’s door and body. they are usually all incased in a rubber tube.

Is the window lock activated ?

Then it might be broken, I’d test to make sure the rear switches were getting power.

I don’t see a separate fuse for the rear windows. The power seems to first goes to the driver’s switch control, then through the rear window unlock (safety) switch, then to the back seat rear window controls via separate wires left vs right. Since the driver’s control works, and it is unlikely both the right and left wires to the rear seats would break at the same time, seems most likely a problem with the window unlock (safety switch).

Are all the interior lights in the rear seat area working correctly?

strangely enough I found out that the passengers in the back can bring the windows UP but cannot bring them DOWN!?! Additionally the door on the back right cannot be opened from the inside!

Additionally the door on the back right cannot be opened from the inside! 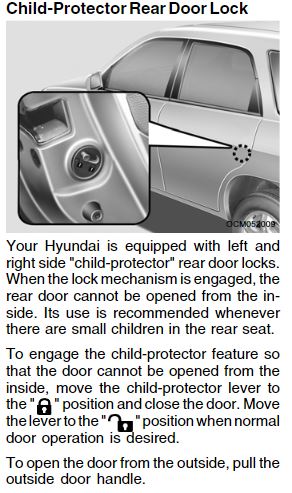 It sounds like a switch problem. Before replacing the switches, try lubricating the window tracks in the back. If that doesn’t work, it might be time to replace the switches. That seems odd because they are usually the least used power window switches. Another possibility is oxidized contacts. Remove and remate the connector a few times and then they the rear switches. It probably won’t work, but it only costs you time if it does. If not, the malfunctioning switches are ready to change.

I’m thinking it’s the driver’s switch that shuts off the rear seats from using the door switches.

I found out that the passengers in the back can bring the windows UP but cannot bring them DOWN!?!

It appears that’s how it is designed to work. The safety switch lock switch is not used in the circuit that allows the rear passenger to put the window up. So rear passengers can always put the window up, irrespective of what the driver does. But to put the rear window down from the back seat, the current goes through the driver’s window lock switch (safety switch). That safety switch appears to be located in driver-side window switch area. Ask you auto-tech to test that switch for you.