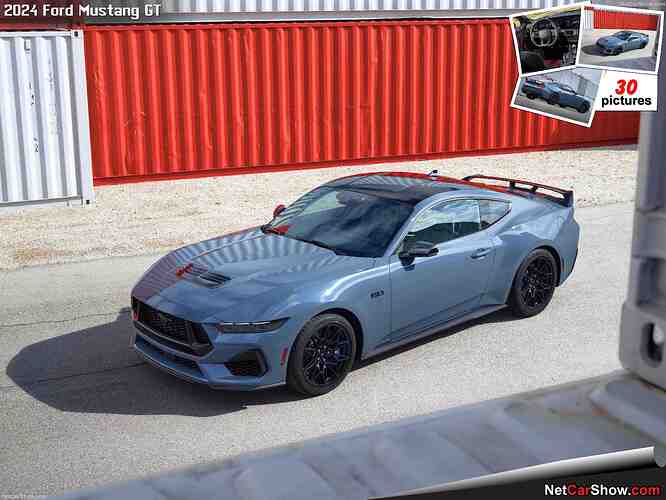 The fourth-generation 5.0-liter is set to deliver the most naturally aspirated horsepower of any Ford Mustang GT thanks to an innovative dual air intake box and...

I love the car…except the dashboard. The non integrated touch screen turns me off.

First we had problems with people talking on their cell phones while driving. Then came texting and driving. It looks like now we will have an integrated video game to distract the driver.

Doesn’t anyone designing these cars consider the consequences of their designs?

"keith,
Doesn’t anyone designing these cars consider the consequences of their designs?

Just a subjective opinion, but other than the snout it kind of reminds me of the current generation Camaro. Sacrilege I suppose.

I kind of wonder about those video distractions also. About a dozen years ago while coming back from TX on I-35 at night through the mountains in southern OK (pitch black there) an SUV passed me doing about 75.
There were 3 video screens going; two in the back and one up front all showing the same video. The windows were tinted but the “movie” could still be seen by me when they went by.

It was to put it in polite terms; an adult oriented movie. I doubt that driver was focused on the roadway. About 50 miles up the roadway, traffic was slowed due to a sea of OHP cruisers and a couple of fire trucks. It was difficult to tell but an SUV went off the road and through a fence about 2-300 feet from the interstate. The SUV looked like the one with the movie goers but I could not be sure. No idea if anyone was deceased or worse; embarassingly deceased.

There are other cars with customizable digital gauge displays, these are not video games.

Doesn’t anyone designing these cars consider the consequences of their designs?

Is the auto maker harmed in any way if someone does get in an accident because of a distracting feature?

It seems to me that the question is more how much responsibility the auto manufacturer has for poor decisions made by the nut behind the wheel. We used to play movies for our children when we took a long trip to distract them. There was a dedicated screen for that in the roof. If newer vehicles play videos on the front screen then the driver can avoid watching or pull over and join the fun.

It is just different backgrounds that can be changed and displayed. it is not a video. the challengers have had this for a few years now.

It’s illegal to have a TV that is visible to the driver in a car in some states.