The truck had ran out of gas so I put some more gas in tried to start it only to hear a tick noise but the engine would not start it wouldn’t even turn over I keep up with the oil changes every 4,000 miles it has oil it had all the fluids it needed what is wrong ?

I assume this is the gas engine (since you said gas). First, don’t ever do that on a car built this century.

I’m not a pro… but this is what I believe is happening.

For a fix, I believe you have to bleed the system of air. As I understand it, your injector rails have a bleed valve (probably looks like a tire air pressure valve). With the key on, you press the valve and air will release. (Wear protection for your eyes and arms and something to catch fuel.)

Now, if air isn’t coming out, it is possible the pump burned out… but we’ll keep happy thoughts. As I recall, Dodges make sure injectors have fuel pressure before allowing the engine to crank. 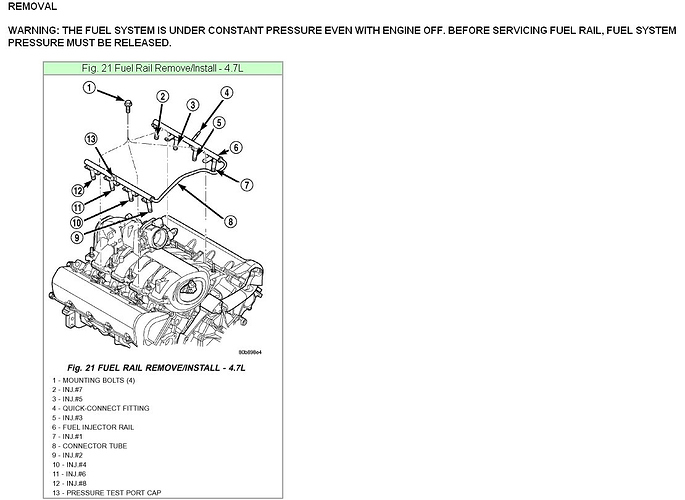 would not start it wouldn’t even turn over

For a fix, I believe you have to bleed the system of air.

How is bleeding the fuel system of air going help his problem of not turning over?

Make sure they’re clean and tight.

Running out of gas could adversely affect the cat, and/or the fuel pump, but nether would create a fails-to-crank problem. Above advice is a good place to start. If the problem seems to baffle the mechanics, the best way to get to the bottom of it is to measure the voltages at the starter motor. There’s two wires that go to the starter motor. Both should measure at least 10.5 volts with the key in start. Measure between the electrical terminal and the starter case.

Are you positive it ran out of gas?

If so, you may now have a battery problem. If the truck just shut off, while driving and you just assumed it was out of gas, then you may have an alternator problem which drained the battery.