Which key is better?

Both keys work. One is used more. 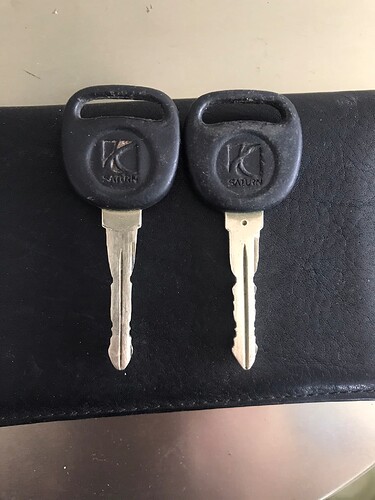 I’d be afraid of the key on the left snapping off in the lock, it looks thin.

It may get to the point key 1 works no more. Got one cut by vin, $10 after my key stopped working due to being worn out. Then life was good. I imagine a locksmith could do that also.

The key on the right appears to be better. I would get at least one new key cut. A locksmith should be able to program the chip. Since these keys do not include a FOB, should not cost much.

Get the key cutting code from the dealer and write it down because dealers only keep that information in their computers for a certain number of years. Making copies of worn out keys often doesn’t work.

That is why you bring the keys and the car to the locksmith. Everything is tested before leaving.

If I had a key that I thought might fail I would replace it . I certainly would not waste the time taking a picture if it and posting it on a Forum.

if they both work, what is the problem? Sounds like they are both better.

Less worn key was misplaced for awhile. That’s why it has less wear.

You may have difficulty with the newer looking less worn key unless you replace the lock cyclinder. The key and the lock tumblers wear together, so tend to continue to mate. I had this problem on my Corolla, the worn key worked fine in the driver’s door, truck and the ignition switch, but wouldn’t open the passenger door. My solution was to grind some artificial wear on the passenger door tumblers.

Hmmm ……… which key is better? If they both work, then both keys are better

Is this a test? the right one. this reminds me when I took the stupid post office test to become a mail carrier many years ago… How many people do you see in this picture? How many mailboxes are in the picture?

Is this a test? the right one

The right one, as in the correct one OR as in the one on the right side ?

Is this a test? the right one. this reminds me when I took the stupid post office test to become a mail carrier many years ago… How many people do you see in this picture? How many mailboxes are in the picture?

was that to prove that you weren’t a robot???

It was a long time ago but, if I remember correctly, they would show you pictures or street names and number and then you had to answer the questions where you would need to match the numbers with the street ect. but some questions a 1st grader could answer. like I remember one for some reason… how many oil cans in the gas station window? I guess they wanted to see how good your memory was.