What are you going to do when oil prices crash?

Getting the boat out that gets 2 MPG?
Long distance trip?
No more car pooling?
Drive your less fuel efficient vehicle more?
Invest in oil?

2008 had high oil prices. Then gasoline crashed down to almost $2 per gallon for several months. Then prices started going up again. When it’s really high it seems to correct down for a little while. It was really low in 2019 and 2020 so this high price is the correction. But I think that may come to an end for a little while just like what happened in 2009. But who knows I could be totally wrong this time. Volvo and Mustangman can have fun quoting that sentence.

The other thing is why do we have such high gasoline prices here in the USA when oil is only $110? In 2012 it was $111 but gasoline cost $3.64 per gallon. Now in 2022 it is nearly $5 per gallon. Gas Price History: List of Prices by Year Gasoline and oil price compared: Crude Oil vs Gasoline Prices - 10 Year Daily Chart | MacroTrends

I do not care, as my great great grandfather in the catering business said if you need eggs it does not matter what they cost.

The reason why fuel costs have gotten so high is because demand is mostly inelastic–at least in the short-term. People are generally unable to change their driving habits, and aren’t going to sell a vehicle at a loss and try to buy something more fuel-efficient unless the pain continues for a long time.

Now if high fuel costs continue for two years or more, people will start to react by seeking new employment closer to home, replacing fuel-inefficient vehicles, etc. If the days of high fuel costs continue, we may see a revival of small economy cars–a market segment which has been missing for a long time. Maybe the time is right for a modern-day Geo Metro, Toyota Tercel, etc?

I plan to continue doing what I’m doing now, much like I have been continuing to do what I did what before prices rose. Like a poster above said, if you need it you’re going to buy it.

People would not have to buy another vehicle to get better mileage, they could simply slow down or at least drive smoother to save gas and I don’t see anyone in my area doing that. I live near a 55 mph Interstate and there is a constant stream of 75 mph +traffic streaming past me while I am doing my usual 64. They are mostly large pickups and Suvs. They can’t drive a constant 75+ because they are constantly coming up behind slower traffic so they have to brake and swerve between lanes.

The good news for me is that I almost never have to brake at 64 until I have rolled onto my exit.

People would not have to buy another vehicle to get better mileage, they could simply slow down or at least drive smoother

My 44 mile drive (40 miles of freeway) routinely takes me an hour and a half. How much slower can I drive?

Move closer to work or get a job closer to home. You are averaging less than 30 mph on your commute. How fast do you have to drive to do that? I can be in the town I grew up in which is 65 Miles away in an hour and 15 minutes. It is half interstate and half country two lane and goes through 4 towns ,3 of which have 30 mph speed limits.

I worked at least one day for 50 different trucking companies. I never moved but my longest commute was 20 minutes and most were 10 or less.

I’ll be retired by then, but gas prices have nothing to do with it. I can retire now, and gas prices won’t play much of a part in the decision, despite driving about 28 miles to work. The extra gas cost for my commute is less than $1000. It doesn’t take me long to make $1000. I’m figuring the commuting cost at $5/ gal now and $2.50/gal a couple of years ago.

The reason why fuel costs have gotten so high is because demand is mostly inelastic–at least in the short-term. People are generally unable to change their driving habits, and aren’t going to sell a vehicle at a loss and try to buy something more fuel-efficient unless the pain continues for a long time.

I don’t think so, fuel prices are high because supply is scarce, wonder where al the fuel is? Read about our record level of fuel exports…

US exports even more oil as domestic gasoline and diesel prices spike.

You are averaging less than 30 mph on your commute.

Ya, no kidding. I think that as I’m sitting in the sea of cars crawling along on my way home. It’s not unusual in the evenings for the first 15 miles on the freeway to take close to an hour.

One reason is that the world (not just the US) is facing a combination of low refinery capacity and record low gasoline and diesel inventories, the worst of both worlds. That wasn’t the case the last time around: 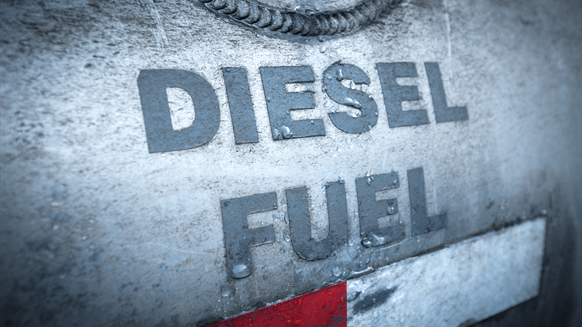 Global diesel and gasoline markets are witnessing blowout crack spreads in the $50-60 per bbl range, reflecting a clear lag in the refining system to respond effectively and decide between supplying diesel or gasoline.

Most jobs are highly fungible, meaning you can get the same exact job–often for roughly similar pay–just about anywhere in the country. For example, I work in heating and air conditioning. I also can troubleshoot and repair medium and low temperature refrigeration, though that is not a service we officially provide, and only offer to certain customers in order to keep their business.

I could literally get this job anywhere in the country. Not only do I make nowhere near the money needed to afford even $600k for this hypothetical 3-bedroom house, but I’d be a fool to pay it even if I did. A basic starter home isn’t worth more than $250k, regardless of what overpaid professionals are willing to spend. If housing costs inflate beyond what I am willing and able to pay, I would not tolerate a situation where I am forced to endure a long commute, or find myself scrimping and struggling just to pay high rent. Instead, I’d pack up my most valuable possessions, sell or donate everything else, and move to another region where I could buy that house for less than $250k.

Most jobs are highly fungible, meaning you can get the same exact job–often for roughly similar pay

There are very wide variations in pay across the country. I was in Branson, MO a few years ago, I saw houses for sale similar to mine in OR that were selling for half the price. I also saw mechanic’s wages fully $10/hr less than what we were paying at the shop I managed. There’s a big difference between $25 and $35/hr.

Not only do I make nowhere near the money needed to afford even $600k for this hypothetical 3-bedroom house, but I’d be a fool to pay it even if I did. A basic starter home isn’t worth more than $250

If I were 24 again and buying my first home, I’d be looking at a starter home. But I’m 52 and my wife and I have worked hard to get where we are in our careers and frankly a starter home just isn’t for us anymore.

Well renting is just throwing money away. Buy a house. You can’t save your way to financial success.

Anyway, when I lived in Eugene I drove 6 miles to work, the drive home took maybe 20 minutes, an average speed of 18mph. Now I average 30mph. That’s a definite improvement.

I just sold a 1510 sq ft 3 bedroom house with a 1 1/2 car attached garage and a large fenced treed yard. The market estimate from a couple of real estate agents was 170K to 195K. Most of the houses in our neighborhood sell to children,grandchildren or nieces and nephews of the original owners. I did the same with mine .Even the kids that move to other neighborhoods bring their kids to trick or treat.

Same as before. I live out in the sticks and things are spread out here in NW OK. Anytime I start my car or truck it means a 50 miles minimum trip and I generally plan things out.
It’s a bit painful to spend as much as i do on gasoline considering I am what could be referred to as very frugal.

We are not allowed to say anything nasty here but I would ask what the new definition of crash is?

Taking my dog for a walk in that era, came upon a neighbor that was getting ready to go on holiday. Big RV hitched to giant boat. I say “Me, I’d just hand my credit card over to Exxon!” Fellow didn’t seem to see the humor … lol …

Why is the price what it is? No idea. Retail gasoline prices have a mind of their own, go up and down seemingly at random. Just a theory, but I wouldn’t be surprised to learn that politics is heavily involved w/gasoline prices.

Getting the boat out that gets 2 MPG?

Nope, Don’t have a boat.

Never have car pooled in my adult life.

Both my everyday vehicles have about the same cost per mile, so it’s a moot point. My Mustang is marginally more fuel efficient than my F-150 (about 1-2 MPG better in overall fuel economy). But the Mustang runs on 93 octane, and the F-150 will run on 87, the overall cost per mile is basically the same. I typically drive the Mustang more as it’s more engaging to drive. I use the truck for truck things, and if I need to take the nephews (3 of them) anywhere.

Probably already am to some extent. My FA handles those things. I would imagine that my mutual fund investments have at least some fossil fuel companies included.

I changed off driving with a couple people over the years in despiration, but really preferred to drive alone one guy from work was a great guy, double phd, hard worker etc. but he burned the candle at both ends. In meetings he would close his eyes and appear to nap. He did the same thing going across the Minnesota river bridge one night. I was five seconds away from grabbing the wheel when he woke up like nothing happened. Almost ruined my new suit. Can’t swim.