The rising price of fuel

… has resulted in worldwide protests: 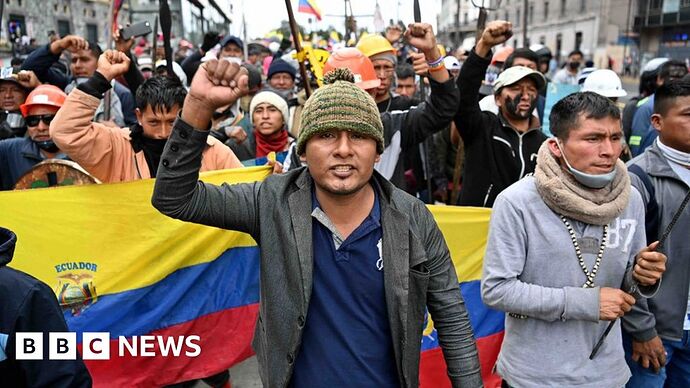 People are protesting around the world against food and petrol price rises, BBC research finds.

And hardly any protests here compared to Europe, Latin America, India and the Middle East. As much grousing as I see on this board it seems like there should have been more US protests.

Perhaps because we have seen higher price bumps in the past twenty years.

Perhaps because we have seen higher price bumps in the past twenty years.

Additionally, there are some people (hopefully more than just “some”) in The US who realize that protests of these sorts are not capable of reversing world-wide supply problems, and additionally are not likely to convince oil companies to reduce their prices.

If we all stopped driving for a month or so, the prices would definitely come down, but that won’t happen because people still have to drive for work/school/food shopping/medical appointments. At the height of the pandemic, gas prices crashed as a result of sharply curtailed demand, but we are now past that point, and we have the added problem of the Russia/Ukraine war that severely impacts supplies.

There is no shortage to raise prices.

Sure there is, in Eastern Europe. Oil is a global commodity. Shortages there affect prices internationally.

Where does Eastern Europe get oil from?
Is there a delivery issue there? Vs supply?
Dang Putin.

Gas prices are around where they were in 2013, before the shale boom. 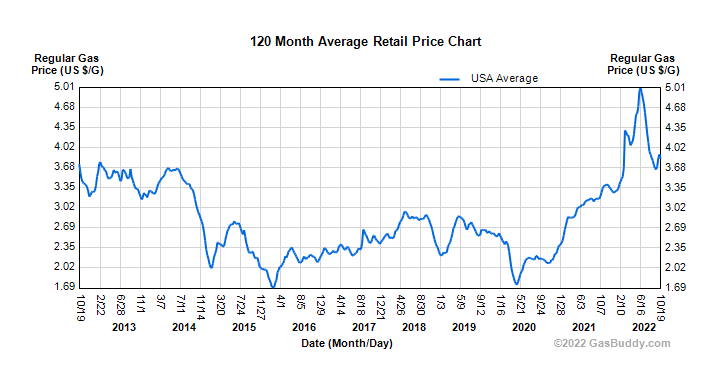 Why does a Harley Davidson motorcycle use 1/50th of a gallon of gasoline per mile? It only has two cylinders. There are cars that hold 5 people that use less than 1/40th of a gallon per mile.

I know motorcycles are used a lot more in poor countries, but maybe the savings are not as high as I thought.

Harley engine is the nearly same size as a small car’s, is aircooled, less efficient, and is tuned for performance not mpgs. A 125 cc Honda Super Cub gets around 150 mpg. 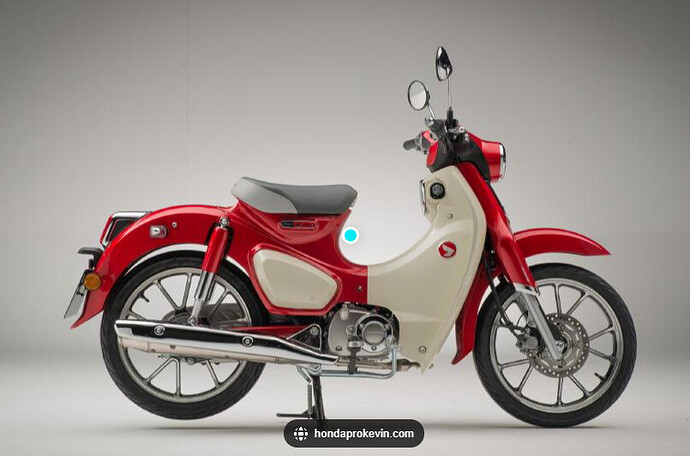 With all the turmoil and uncertainty in the world I don’t think that is a wise thing to do .

The price of gasoline seems to have a definite relationship to politics. I more or less expect to see some significant USA price changes in the retail product just prior to an election. After the election I expect the price will stabilize a bit.

Why does a Harley Davidson motorcycle use 1/50th of a gallon of gasoline per mile?

By comparison, my Kawasaki Concours was smaller, lighter (605 lbs), with a smaller 4 cylinder 1000cc engine but still only got 40-42 mpgs on the highway at 70 mpg turning 4600 rpm. There was a guy who sold kits to change the final drive (shaft drive) that claimed 48-50 mpg.

I know motorcycles are used a lot more in poor countries

Now I want to put a “big block” Harley engine in a car with a manual transmission! The radiator fans can blow air on the engine.

Even if a motorcycle doesn’t get the mpg you think it ought to, got to remember at least you don’t have to feed it hay when it isn’t being used … lol …

You can buy one… used, though. The Morgan 3 three wheeler used an S and S Harley type air cooled engine mated to a Miata gearbox drining the rear wheels. Not sure what size S and S, they build them to 2.0 liters and a bit bigger. They make torque, not hp. They get poor mpgs though, 30.5 mpg.

Now I want to put a “big block” Harley engine in a car with a manual transmission! The radiator fans can blow air on the engine.

Your wish is my command…

It’s the ACE Cycle Car from Liberty Motors, don’t know if they are still in business… 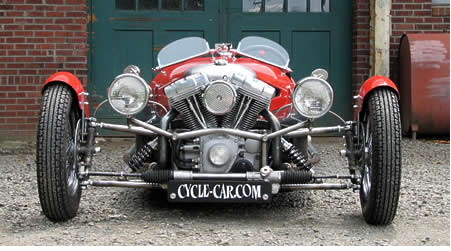 Then, if you are into classics, there are the Morgan 3-wheelers… 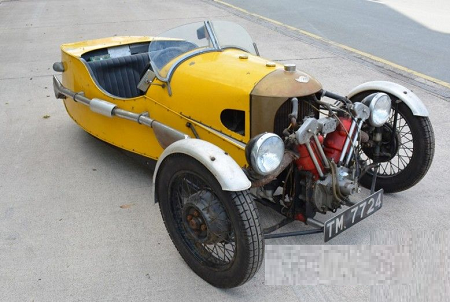