“Demand decreases as prices increase” so I guess the Law of Supply and Demand hasn’t been repealed? 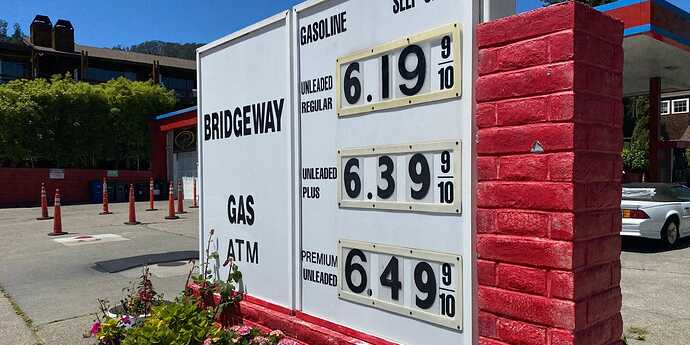 Gas prices have soared so high that the US is now seeing demand destruction...

The average gallon of gas in the US hit a record high of $4.59 on Tuesday, about 51% higher than a year ago.

“Oil companies record record profits…” so too the natural demand for money. 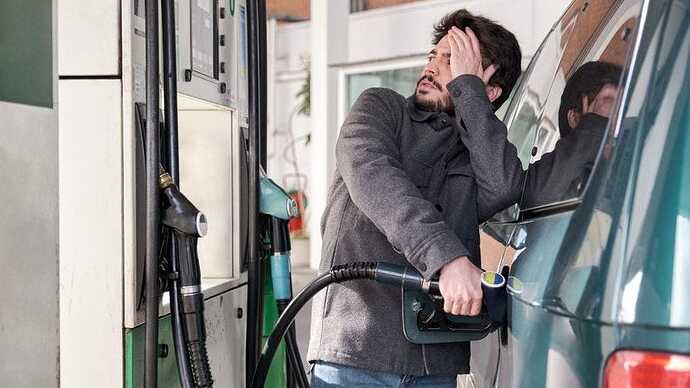 Profits for Exxon Mobil, Shell, Chevron and more rose by billions in the first quarter – despite costs from war in Ukraine and soaring energy prices.

The UK,just announced a Windfall Profits Tax on energy companies so the government impulse “to do something” also hasn’t disappeared. 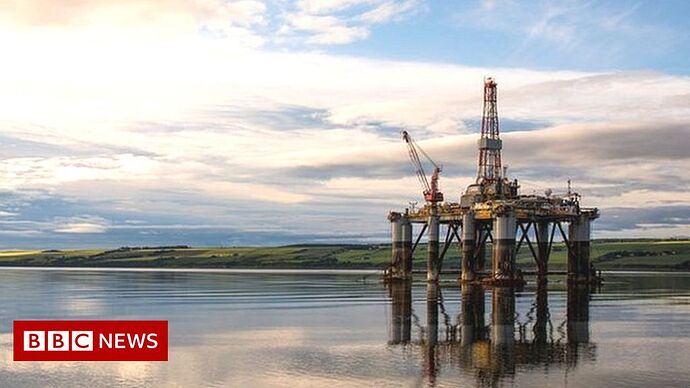 Energy prices: How will the £5bn windfall tax work?

The UK government is imposing a £5bn windfall tax on energy companies, this is how it will work.

So I’m wodering how things are looking in your neck of the woods. Are you driving less? More consideration of a future EV? Are we looking at another “Burning of the Hummers/Denali’s” like the last price shock?

It changes daily. Down a little, up a little. I have not changed my driving. If I want to go, I go. Interesting though was a warning for the midwest and other areas of possible brownouts this summer, due to the grid not being able to meet peak demands. Kinda foolish thinking an electric car will help or an electric generator during a power outage.

As you know @Beancounter, prices in MD are way up and ready for a big spike from a preplanned gas tax increase. I think I’ll work from home more often. That saves about a gallon and a half each day I stay home.

Demand for travel and other out-of-home experiences has built up over the last 2+ years. Call it pent-up demand. Higher prices aren’t enough, so far, to tamp down that demand.

Call it pent-up demand. Higher prices aren’t enough, so far, to tamp down that demand.

So at what price point do you see it changing? Gas prices are currently about $4.50 at Costco and Diesel at other stations is about $5.00, which is also about the price for Home Heating Oil, which could be a significant non-discressionary cost. (Driving your car is a choice but heating your home is a necessity)…

Driving, for some of us, is a necessity. The majority of my driving is to and from work. No work, no money. No money, no food. 9 months out of the year, I could survive without heating or cooling my home. It’d be miserable, but it’s possible.

That being said, I haven’t changed my non essential driving habits either. If I want to drive to the mountain bike trail, or church, or the tennis courts, or a restaurant, I still do. It’s called freedom. And I kind of like it. I don’t think I’ll alter my driving until I literally can’t afford not to.

Truck drivers especially have got to be cringing at every fuel stop.

I don’t think I’ll alter my driving until I literally can’t afford not to.

Agree with that I am retired and don’t drive as much as I used to but grocery store and DRs appointments are a must as there is no public transportation in my area plus do like to go out to eat every now an then.

Calif Governor still arguing with state legislature how to implement a “gas-tax” rebate. Deadline for hike in state gasoline tax looming. Voters here don’t like the state gasoline tax rates and this is an election year, including for Gov’r. So there’s some tension … lol …

This argument between gov’r and legislature has been going on for more than 70 days, seems no closer to a conclusion than when it started. Last I heard gov’r wanted rebate to be $400 per car, up to two cars in a family. Legislature rejects, says it benefits wealthier families who can afford two cars. & just b/c a family has two cars doesn’t mean it uses any more gasoline than a family w/one car. Furthermore, even families with no cars at all are still paying higher prices for goods and services b/c of the high gasoline price. I’m guessing the compromise will be a single amount (maybe $500) paid to every family regardless of how many cars they own. I hope it is paid as a check or direct deposit rather than a debit card, but that may be something on which the legislature has to yield to get a deal.

As for how it affects me personally, as you may know b/c of Covid/emissions issue (car emissions, not mine … lol …) Calif won’t let me drive my 40 mpg Corolla, insists I drive my 15 mpg truck instead. With gasoline costing so much I’m not doing much shopping, so if others are doing what I’m doing, just parking their vehicles, local businesses are indeed taking a bit of a financial hit to their revenue. I guess that’s what they mean by “demand destruction” in the first link in the OP’s post above. If I need to go somewhere I usually hop on my bicycle and pedal away.

Your state can have a gas tax holiday or tax rebate, but it’s temporary. Maryland had a month long tax holiday. It’s over and prices are about 30 cents higher than when the tax holiday was instituted. The state doesn’t seem likely to do it again. It seems to me that the big problem with tax holidays is that it reduces income for the states but does not reduce expenditures. Many states, including mine, have to reduce expenditures to match income. Except for capital projects, no excess spending is allowed. If tax suspensions last too long, expenditures will have to be reduced. It might start with suspended road work, but could carry over into other areas.

The GOP branch of the legislature here in Calif wants to address the price of gas problem with a gas-tax holiday. You can probably guess how well that idea is faring … lol …

Well like I said before the cost of gas is only the tip of the ice berg. Of course transportation cost will impact every single item that is bought. But gas may be a minor issue compared to housing, investments, food, and other issues. I don’t like the fuel cost one bit but I can’t fixate on just that.

87 octane passed $5 at the discount station here in Central Oregon a couple days ago. Diesel is $5.59. I’m doing my part by riding my scooter rather than drive the car, though the car gets 40 mpg. Haven’t noticed any reduction in traffic as of yet.

I don’t like the fuel cost one bit but I can’t fixate on just that.

Good point. The current economic situation seems beyond the capability of the current political system to address. What we are seeing is akin to rearranging the deck chairs on the sinking Titanic. “Hey, boat hasn’t sunk yet, might was well get the deck chairs in convenient locations !!!” … lol …

the cost of gas is only the tip of the ice berg.

You are retired and probably don’t drive nearly as much as you used to or as much as working people do. People that drive 60 or more miles per day 5 days each week have a big cost increase in fuel. For someone in that situation that gets 25 mpg average, the annual price increase is about $1200 for gas that costs $2 more than it used to. The increase is $2000 for people that drive 100 miles per day. I used to do even more than that for a few years.

How does a gas station that is in California, but near another State that has lower prices stay in business? Or do they not have any near their borders for this reason?

How does a gas station that is in California, but near another State that has lower prices stay in business?

There aren’t any significant cities near the border. Truckee, Ca is close to the Nevada border, gasoline in Reno, NV is $5.46/gallon.

Gasoline in Medford, OR near Interstate 5 is $4.90/gallon, there are no large California cities nearby.

The population of California is far from any other state, except that San Diego is next to Mexico. The cost to drive to Oregon or Arizona would be much more than any possible savings. I paid $6.50 a gallon at a Shell station for mid-grade the other day, but it was for my elderly motor scooter and I only bought 2 gallons (100-120 miles worth).

A couple of months ago we went to near Santa Barbara to see friends. It was about $30 more to fly there in a couple of hours than the gas alone to drive what would be about an 800 mile round trip.

Needles California is just across the river from several gas stations in Arizona. There is a big difference in gas prices between them. Whenever I drive by, the stations in AZ are much busier than the ones in CA. Don’t know how the CA stations stay in business.

How does a gas station that is in California, but near another State that has lower prices stay in business? Or do they not have any near their borders for this reason?

The gasoline price difference does take some sales volume away from Calif gas stations. When I’m driving from San Jose to Reno along I80 I wait to fill up at Boomtown, the first gas station in Nevada. It’s not near any sizeable town, a considerable distance from Reno, and probably only exists as a commercial area b/c of its proximity to the border, casinos and gasoline the big draw for Calif residents. Likewise when I’m returning I again fill up at Boomtown before entering Calif. By the volume of gasoline being sold there, I’m not the only one doing this.

But if you lived in the nearest Calif community of any size, Truckee, wouldn’t make practical sense to drive to boomtown for gasoline.

There’s a couple of high-people-density places in the Tahoe region where Calif & Nevada meet, Crystal Bay, and South Lake Tahoe. Crystal Bay has casinos on the Nevada side, but don’t recall any gas stations. Likewise for South Lake Tahoe. The towns in that area are mostly controlled by the state of Calif, and so may control this dispute via zoning laws; i.e. gas stations not allowed on the Nevada side.

You can use Google maps street view to cyber-drive past these borders , maybe you can see a gas station on the Nevada side of the border. On a side note, the Crystal Bay border used to be pretty famous for its casino. The border split the hotel/casino in half, one building, w/ the hotel on the Calif side, casino on the Nevada side. The bottom of their swimming pool showed the border line. This hotel/casino was said to a hang-out for a lot of famous 60’s rat pack entertainers, Frank Sinatra, Dean Martin etc. I never say any of them there though. The hotel/casino remains, but is named the Crystal Bay Club now.