I’ve got an '05 Dodge Ram quad cab. The back window is leaking like crazy. I’m guessing it was probably replaced at some point and it wasn’t caulked properly. Taking that window out and recaulking it seems like a big job. It’s a 10 year old truck, so I’m not looking for perfection, but I can’t have the whole truck smelling moldy either. What is a good way to put a bandaid on that? I’m thinking maybe some roofing tar or driveway crack sealer? On the other hand, water is pretty insidious. There are serious temperature and vibration issues. Am I kidding myself to think it is even fixable?

Have you gotten an estimate from a mobile glass company? I can’t imagine that the cost is terribly high to fix the seal. I think the results will be better than if you tried to rig a fix yourself. I certainly wouldn’t want to start breathing in mold spores.

What do you mean about the temperature and vibration issues? I don’t follow you here.

@instock
Long Shot… Just Throwing This Out There…

FYI, I checked for bulletins pertaining to leaks on these vehicles. The manufacturer has identified water leaks on some 04-05 Ram trucks with (5) roof mounted marker lamps as being caused by the base gaskets of the lights not sealing well. The fix was revised marker light assemblies.

I wondered if you had the lights and I also wondered if there was a way for water to run back and make it appear that the rear window is the culprit. I was thinking that maybe parking on an up-angle in a driveway or something…

I had two places tell me that it is not repairable and they both want $500 to fix it.

One place recommended something called “flowable silicone”. It looks like exactly what I need and it got a bunch of good reviews on Amazon. I’m going to give that a shot. 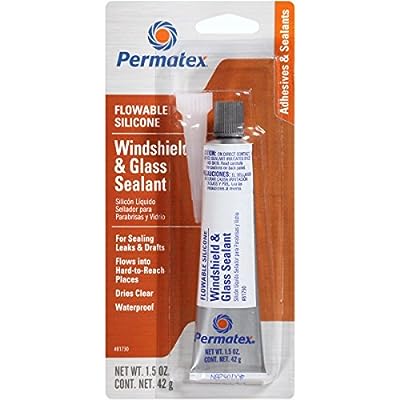 @"common sense answer"
Thanks for that. Good thoughts. I WAS on an uphill driveway yesterday when the water was really pouring in. But today I dribbled a little water on with the hose in different places. I felt like the results were pretty conclusive. The seal also looked a little sketchy.

I put the flowable silicone on and we’ll see what happens. It flowed in nicely, so I have high hopes for it. Even if it doesn’t work, another application would be my next move.

Well, I let it cure overnight. Today I put the hose on it again to see what happened. It wasn’t 100% successful in stopping the leak, but it is much, much better. I wasn’t exactly sure where the leak was and the tube of stuff isn’t really that big. So there was definitely some guesswork in applying it. Maybe I’ll get another tube or two and really fill it up good. But for now at least it is no longer an emergency.