So my next door neighbor bought his younger son a 1998 Toyota Tacoma 4wd pickup. It’s an extended cab with over 400K miles. However, he said the engine is newer. I looked at it while the hood was up and a couple of things struck me. The first is the engine cover says “3400 DOHC.” I know this means it’s a 3.4 liter double overhead cam engine. The second is it appears that all of the intake runners exit the plenum (which has the Toyota double oval logo embossed on it) into the engine on left side of the car. Any idea what years this engine was made? Is this an engine that was ever put into Toyota pickups? Could this be a straight 6 engine, perhaps from an old Supra?

That pick-up came only with the 2.4L L4 DOHC 16 valves in 1998.Could be that they put a different engine in it or they found an engine cover that will fit because they lost it.
142 hp @ 5000 rpm
Transmission 5 speed manual

Looks like a V6. Those 6 intake runners split into 3&3 under the upper manifold. 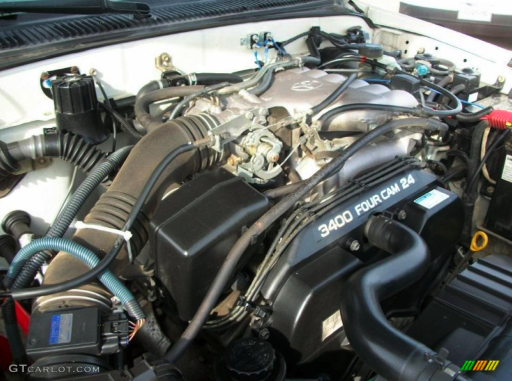 Thank you for the information. Insightful, the engine looks just like your picture.