seeing a bear is not uncommon

I may have had a bear in my yard a few nights ago. I found a large scat log in the side yard next to a big pile of deer pellets. It might have been a big dog, but it would have been a very big dog. About 3 years ago I was out for an evening walk. I passed a house and the owner cautioned me to watch out for bears. Her husband was following two that walked through her backyard about 10 minutes earlier. If I put a red light out back and leave it on I might see more wildlife at night. The while lights scare them off.

I remember “Burma Shave” but I did not remember any roadside signs so I Googled them and I was only 13 at the time the company was sold to Philip Morris in '63 and the signs were no more. Here is a photo from the Internet… 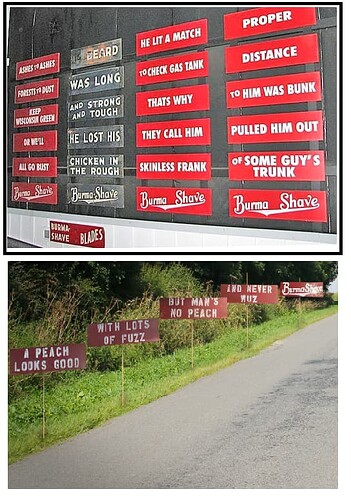 And for you trivia buffs, movies often pay movie producers to feature their products and here are a few of the movies the billboards appeared in… Bonnie and Clyde, A River Runs Through It, The World’s Fastest Indian, Stand By Me, Tom and Jerry, and MAS*H. I have several of these on DVD and I’m going to go look for the signs…

However, in the final episode of the popular television series MAS*H also included a series of road signs in Korea “Hawk was gone, now he’s here. Dance til dawn, give a cheer. Burma-Shave”

In 71 years, ive never traveled on a road that had burma shave signs.

In 71 years, ive never traveled on a road that had burma shave signs.

When I was a kid, they were fairly commonplace on rural roads in PA and a few others states. Those were roads with speed limits of no more than 45 mph, so it was possible to read and appreciate the signs.

We rarely left new york city, and when we did it was usually by train.

They were in minnesota, South Dakota, and other two lane roads with the standard 65 mph limit. Not on interstates or turnpikes or railroads that I saw. Then in sd on the way to the black hills, you would see similar wall drug signs. A lot is missed by never taking road trips out of the coastal areas.

I dont feel that i’ve missed anything.

A momma moose and her calf ran across the road in front of my car in Yellowstone National Park, much too close for comfort. Huge animals!

My favorite though was the mountain lion that dashed across in front when driving in the southern part of Yosemite National Park. It paused momentarily to give a warning snarl before disappearing into the forest. Big kitty!

To date, in nearly five decades of driving, I’ve run over one squirrel and one raccoon. I hope I never hit another animal.

Well not like I do on purpose. Coming home from the cabin one night, after 180 miles, I was five miles from home and a raccoon ran right in front of me. He was high enough to knock off one of the radiator support posts plus cracked the air dam. So lost all my coolant. $700 later and a few days I was back on the road. Insurance paid because he was alive before I hit him. Pitch black on the highway, not much to do. We’ve got a lot of squirrels around here but never hit one. Turkey and coyote but not squirrels or rabbits.

Raccoons are a lot larger than I thought. I walked out to work on the side of my house, and spied a raccoon on the stoop at the side door to the kitchen. The wooden door was open and the screen door was closed, but unlocked. I was concerned that he might open the door and walk in. Mrs JT was in the kitchen, just the other side of the door. I went into the shed to get something to shoo him away. He was gone when I got back out. Whew! When standing, he was almost 5 feet tall.

When I was a kid, they were fairly commonplace on rural roads in PA and a few others states. Those were roads with speed limits of no more than 45 mph, so it was possible to read and appreciate the signs.