Seen any goofy signs on your travels?
There are two businesses I drive by once in awhile that still elicit a smile-

Upright Fence
Really, what’s the alternative and would you want one?

NorthE@st Record Retention- mobile shredding
First we shred them, then we store 'em for ya!

Anyone else have a few gems they see while driving?

Two signs near each other on R84S in CT

Then there are the ones you see in Maine about plants not allowed in boat trailers… never figured that out.

There is one road where they put up a “Bump” sign for a little divot in the roadway that you can’t even feel. About 100 yards farther there is an extreme bump but no sign, and if there is anything loose in the back of a pick-up truck it will get launched. The property owner made his own that says “Now That’s a Bump”. The town still ignores it.

Then there are the ones you see in Maine about plants not allowed in boat trailers... never figured that out.

Invasive species maybe? We have a huge Eurasian milfoil problem in our lakes here. The DNR runs inspection stations to be sure you aren’t carrying any plants on your boat when you pull it out of the lake.

I always liked this one: 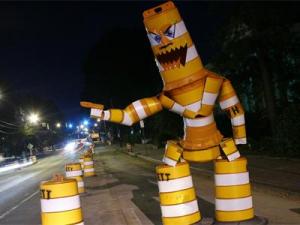 Some artist snuck out one night and made it. He was in hot water for vandalizing the barrels for awhile until the construction company decided they thought it was cool and declined to press charges.

Then there are the hacked programmable signs: 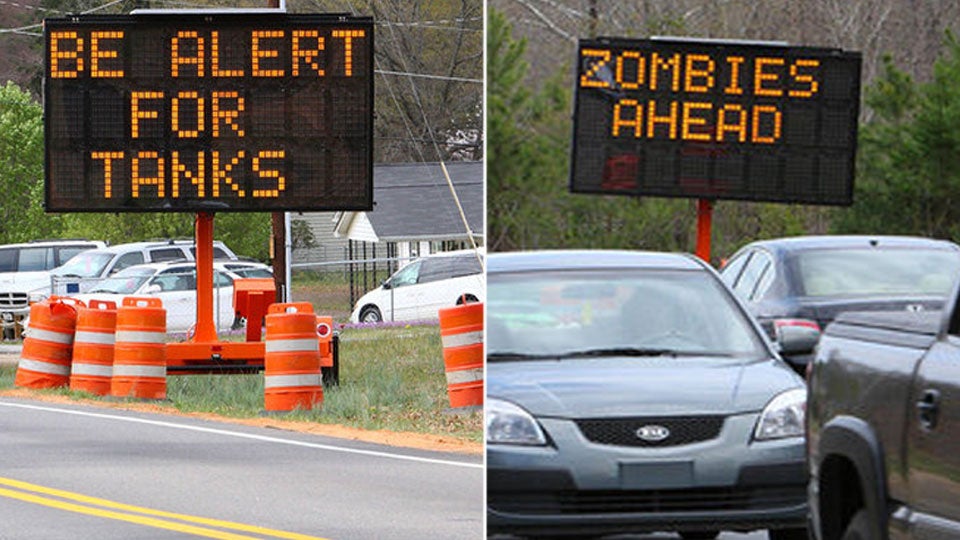 And there’s an independent garage in town that’s always changing its sign to something amusing:

“Jesus saves, passes to Moses, he shoots, he scores!,” “My last customer told me one heckuva saab story,” “Water damaged interior? Stop in, I Noah guy,” “Do not read this sign,” etc etc.

I’d be driving by every day just to read the sign.

I used to live in Maine BillRussell and I may have the answer. They don’t want them to fly out of the trailer and grow on the side of the road…especially if they are not plants that are indigenous to the area.

Speaking of programmable signs- guess where this one is from

During the US occupation of Japan the local Japanese insisted or putting up the local traffic signs in both languages.

On one road leading to a US base, it read “No intercourse beyond this point”.

missileman: figured it was something like that, but the signs certainly don’t put that across.

I don’t know if it qualifys, but I followed a dump truck down the road one day, and on the tail gate of the dump box was painted “Every great day starts with a good dump!”

The one day I didn’t have my cell phone with…

I see LIVE BAIT signs all over the place, wonder if there are any dead bait shops

There was a LEFT TURN OlLY for a while, part of the N came off.

There was a garage around here that until recently stated, in very large letters, that they specialize in all foreign and domestic makes.

Saw this on a church marquis,

COME TO CHURCH AND MEET JESUS THIS SUNDAY,
TEXT WHILE DRIVING AND MEET HIM NOW.

Sign in front of a liquor store near the university campus where I taught:

I guess it’s o.k. to drink if you are a sociology student

I was never able to figure out how a person would make use of that information. It’s not a sign I’m referring to but a paint job. There’s railroad overpass on a 4 lane street near downtown that is clearly marked 11’6" clearance with flashing lights. Over the decades there’s been a huge number of truck drivers who succeeded in opening up their trailers like sardine cans.

What makes this worse is that the 11.5 foot clearance is in a short dip underneath the overpass with the pavement rising on each side. Drag a long wheelbase truck under it and the trailer gets raised whereas on a perfectly flat road surface it may clear.

So after 40 years they did something about it They painted both sides of the entire trestle in yellow and black with evil, slanted eyes and huge shark’s teeth all the way across. Now it looks like you’re driving into a “Jaws” movie poster.
So far it’s seemed to work; I haven’t heard of any peeled open trailer incidents.

About 10 years ago I was with my oldest son and getting gas at a station when a bobtail furniture truck went by with 3 young delivery guys in it. The truck was from a large, well known furniture dealer in OK City. They were headed in the direction of that overpass and my son and I made a few casual comments about their plowing into the trestle.

After filling up we headed that way and sure enough, some traffic backed up and that van was wedged underneath the trestle with about 7 or 8 feet of the van top peeled back.
Likely those 3 were unemployed later that day.