That may be true, may not. Hagerty was the source of the $250K estimated value and even they admitted it could be much more, since the car was a prototype. It is a gamble like any car restoration. A little extra time to use as much of the actual car as possible likely will pay off in increased value.

So basically just replacing with parts from a donor car. That will diminish the value greatly. It won’t be worth anywhere near $250k.

If it was simply a prototype made from a production base version to begin with and has no real provenance adding to the value, it can most certainly be equivalent to the first one that was built. It’s basically the same car, made in the same way. If it had been built by someone famous but now dead, won a significant race or driven by someone special, that would differentiate it from ones built later. This looks just to be a prototype someone built using a production car as a starting point.

FWIW- I’ve never put much value on provenance myself. I could care less who owned it, what history it had etc but there certainly are people that do and pay dearly for it so they can brag about owning it. I just look at the mechanical aspect of it.

What differentiates a prototype from a concept car? GM concept cars are often worth an astounding amount because GM almost never lets a concept car leave corporate control. If concept and prototype are synonymous, a prototype could be worth big money. $250K is chump change for some of these concept cars.

The term prototype usually refers to a working vehicle with produce-able features that can proceed to production. A Concept vehicle is a show car that may, or may not be functional. Some can just be design bucks - body only with no working parts. Some can be fully functional cars with features the designers know they can’t have - super low ride heights, suicide doors, pillarless windows, stuff like that.

There is a gray area overlap between “prototype” and “concept” car. The '64 Pontiac Banshee was a concept car but a fully functional and generally produce-able car. 2 were built and later ended up in private hands.

The real issue is that the car has an “X” VIN plate. That means the car cannot be titled and licensed for road use in the conventional way. It would need a dealer or a manufacturer plate to drive it.

I believe the concept I was thinking about is the 1954 Buick Wildcat II. It sold at Barrett Jackson a few years about for $2,500,000 IIRC. Definitely not the not the Wildcat I or III.

There are a number of concept cars sold from the GM design studios over the years. The 54 Wildcat II is but one.

GM’s bankruptcy forced their hand and they had to sell some of these rare cars. 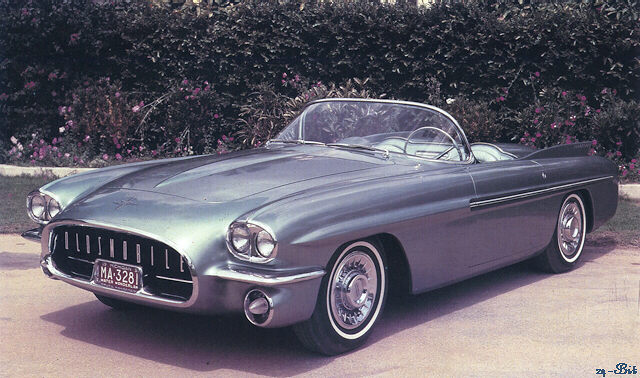 Heres what the Corvette Oldsmobile Division wanted, but never had. This experimental sports car would have been in direct competition with the Chevrolet Cor...