@VDCdriver I think it is a mistake for educational institutions to buy out “old timers”. These old timers have a lot of experience that recent graduates may not have.
The university from which I retired eleven years ago began a buyout program for senior faculty a year ago. These professors were offered one and a half times their current salary to retire. In many cases, these professors were replaced by adjunct faculty. Now the senior faculty members were bringing in grants from which the university took 46% off the top for “overhead”. Adjunct faculty don’t usually bring in grants. It seems to me that the university cut off its nose to spite its face.
This plan wasn’t in place when I retired at 69. I had a couple publications and had excellent student evaluations, so it was time to retire while I was ahead and still liked my job. Had I been offered a buyout before I was ready to retire, I would have turned it down.

Seems that Boeing study has been disproven. Oh, well! I don’t regret my decision to retire early!

Many 50 somethings were forced into retirement during the culling of the auto-industry back in the 70’s. It was extremely hard on them.

Many of my colleagues at GM would HOPE for an early retirement package when the sales dropped. GM would “sweeten” the deal by paying the amount their Social Security at 62 for those retired at 58 to 61 years old. It happened so often in the late 70s to 90s, it was almost expected as a benefit.

Back in the 70’s and early 80’s many got an early retirement package, but the cuts were so bad that many were NOT eligible for any retirement package. I had at least 2 uncles in their early 50’s working for Chryco (New Process Gear) who did haven’t enough years with the company for any retirement benefits. And with unemployment in double digits in Central NY at the time…they had a very hard time getting work.

I think it is a mistake for educational institutions to buy out “old timers”. These old timers have a lot of experience that recent graduates.ay not have.

That is true, but a factor that you almost surely didn’t have to deal with on the college level is violence in high school classrooms, hallways, and cafeterias. I was on the faculty long enough to remember when fist fights were so rare that we could go through several months without even one violent incident. Then, about 25 years ago, we got a Principal who talked a good show regarding discipline but was incredibly lax on that topic, and the result was that a typical day included 3 or 4 fist fights, and many faculty members were badly injured when they intervened.

When you see bloodied colleagues being carried out on stretchers a few times each week, it’s difficult to want to remain, and when the sick leave buyout policy was announced, there was a virtual rush to retire.

When you see bloodied colleagues being carried out on stretchers a few times each week … there was a virtual rush to retire.

Yeah, I can definitely see that as a reason to retire or at least switch occupations. As far as early retiring, besides the financial aspects, folks should consider how well they would adapt to an unstructured life. Many of my work colleagues would have a very difficult time with no start & end time for the day, no office to drive to, no definite schedule of things to do, nobody to direct to do some task, nobody to direct them to do a task, nothing else besides work really interests them, etc. Others who tend to be successful early retire-ers, usually have a long list of things they enjoy & would like to do if their time wasn’t otherwise occupied by their job. Could be something like starting their own business, but could be just painting their apartment & taking up backyard vegetable gardening.

Ironically, I had the same sign (minus the bird) posted in my office many years before the marvelous Mr. Musk emerged on the scene… 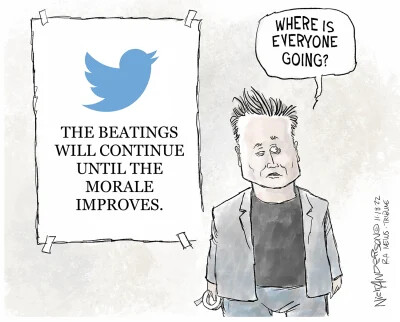 I have to say, it’s quite a “fireworks” show he’s putting on. 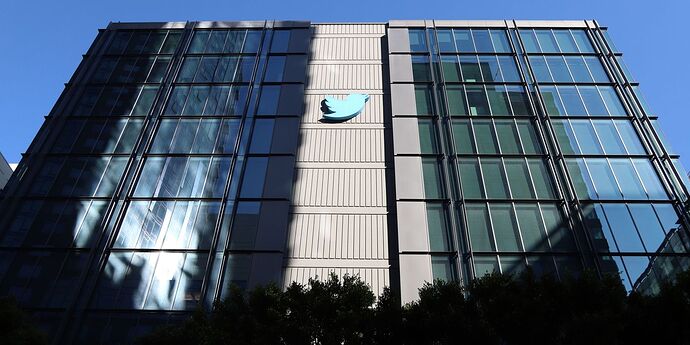 The social-media company is working to bring down expenses as many advertisers pause spending and debt payments loom.

Yeah that is awful. My coworkers had the required 30 years or 85 “points”… years plus age to retire. The company was concerned about age discrimination lawsuits so 50+ employees were exempted from the forced “retirements”. Until the Delphi bankruptcy, of course.

Yeah that is awful. My coworkers had the required 30 years or 85 “points”… years plus age to retire. The company was concerned about age discrimination lawsuits so 50+ employees were exempted from the forced “retirements”. Until the Delphi bankruptcy, of course.

Back then it was done by seniority (years of service). This was negotiated with management and the unions.

My coworkers were salary, not represented by a union. The union workers got a sweeter deal. Every overtime hour added to their service years. There were skilled trades that had full retirement at 45 after being hired at 20. Skilled trades always worked lots of overtime. GMs bankruptcy screwed the salary workers because Delphi was heavily invested in GM bonds. 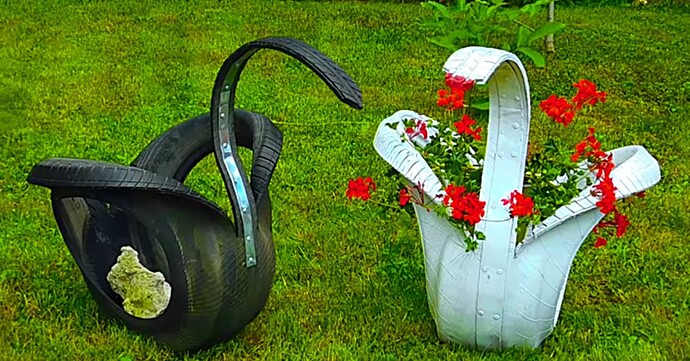 OK , someone explain what that picture has to do with retirement or tires ?

Those are DIY swans made of old tires

A couple of studies on retirement shows that for each year earlier than 65 someone retires, they gain 2 years of life expectantcy!

Good to hear.
I retired in April at 62; after 31 years managing EE labs at a university.
I’ve gone back a couple times to the nearby eateries and run into former co-workers.
A couple have said I look more chipper.

When I was still working for GM sometimes a retiree would stop in to say hello. They all seemed to look younger than at their retirement parties.

Speaking strictly for me, getting old beats the hell out of the alternative.

It used to, but at this point im not so sure.

Part of the offer my government employer gave me was to pay what social security was paying me at the time of my retirement. Only problem: no inflation adjustment until 62. Which was fine until this year.

And like at the above mentioned university, there were severe repercussions from the early outs at my organization. The loss of particular financial management and non-political staff was viewed very negatively by both Republicans and Democrats on the Congressional committees overseeing the agency. Among the issues: The new political appointees (Trump’s) had refused to inform the committees of the staffing cuts in advance, as required by law. Congress was so PO’ed that they cut the agency’s appropriation the next year, imposed more restrictions on user fees, and zeroed out several offices that were staffed mainly by political appointees. The following year the remaining political leadership of the organization still managed to spend more than the Congress ceiling. It all prompted even lower level financial staff quits, and then even the replacements left. It wasn’t pretty.