My 2012 ford focus lost power to the drivers side power window. Was intermittent for a little while and then stopped working altogether. I took apart the door panel after buying a motor/regulator set but decided to test the power first before reinstalling a new set. I have power coming from the switch to the motor when I press the up/down switches. But when I checked power to the motor the light on my tester did not light up. How do I diagnose what is cause the loss in power to the motor? Do I have to take off all the tape holding the wires together??
Any/all help would be appreciated

Open the door, and near the hinges you’ll see a rubber conduit between the body and the door. 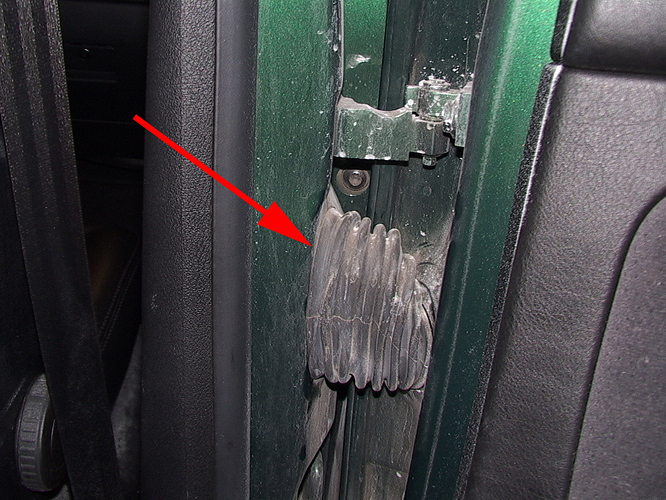 All the wires for the power door lock/window run thru this conduit.

Because this is the drivers door, which gets used the most, the wires in this conduit have a tendency to break.

That’s where I’d look for the loss of voltage.

I have power coming from the switch to the motor when I press the up/down switches. But when I checked power to the motor the light on my tester did not light up.

You appear to be contradicting yourself. Please explain better what this means.

The output from the switch connector produces power but the input to the motor on the same wires doesn’t have power. Thus there must be a break or interruption in the wiring coming from the switch

Ok, I understand now. Yes, if the motor was connected during both tests, there must be a break in the wire or a bad connector between the switch and the motor. I think both the power and the ground to the motor gets switched, in order to allow the motor to reverse direction.

How would I troubleshoot/fix this issue?

Obtain a wiring schematic, identify the color markings of the wires involved, and trace them out from the switch to the motor.