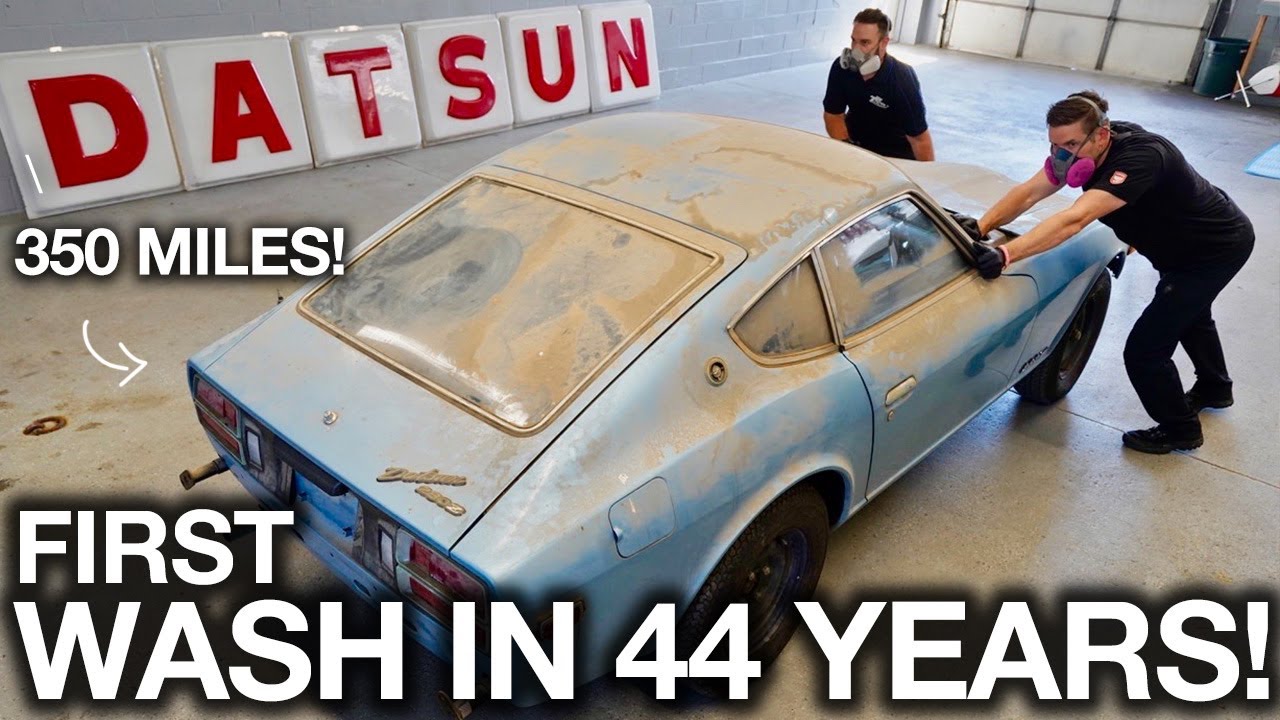 It always amazes me how many rich people that collect cars must be out there. Sure I have a bud with 6 corvettes, but in my mind I ask why. I suppose if I had the space and desire I could understand, I am old enough now I want to get rid of stuff.

how many rich people that collect cars must be out there

Some are rich, however. I volunteer at a car museum with 115 cars owned by one man. His total collection is maybe 125 cars or so. Many are one of a one, one of 3, the first of 22, ect. Most all run and are driven regularly. All are very significant to the car collector world.

I think it is sad the 280Z was never enjoyed the way it was designed to be enjoyed. An un-driven car is just wrong, in my opinion.

Not all car collectors are rich.

+1
My brother and SIL are friendly with a couple that owns a Packard and an Oldsmobile 88, both of which are of the '53-'54 vintage. These folks are what I would call “financially-secure”, but not rich. My relatives have never ridden in the Olds, but they have been treated to a couple of rides in that Packard, and they described it as “like gliding over the road while seated on a sofa”.

An un-driven car is just wrong, in my opinion.

="Mustangman An un-driven car is just wrong, in my opinion

Agree 100 % a clasisic car is like good whisky meant to be enjoyed and shared with others’.

Datsun. You know it old. No cvt trans. Nice.

That should be the only thing that matters

I think it is sad the 280Z was never enjoyed the way it was designed to be enjoyed. An un-driven car is just wrong, in my opinion.

Agreed . . . cars are meant to be driven. What’s the point of having a nice roadster, for example, if you store it with the top up all the time and never enjoy the open road?

Wasn’t the 240Z the only good one? Didn’t they just get heavier and less-manageable with the increases in engine size?

The 240Z was the best but not the only good one. 260s and 280 are still good cars, though. The engine was the same family, just larger displacement.

The 280Zs had gotten heavier with more options but the extra 400cc helped that.

Back in the 80s and 90s I used to work on a lot of Z cars before the herd started getting thinned out dramatically. One of the biggest problems I saw back then was that the availability of parts in the aftermarket and the price of those parts turned a lot of people off.

A distributor for 600 dollars and an A/C compressor (not to be had in the aftermarket) was 900 bucks at the dealer. That led to a lot of sticker shock and was a ton of money 30 or so years ago.
Our local MAC tool man’s wife had a 280 with a failed A/C compressor and was in panic mode over the potential cost. They left the car with me for a week to see if I could figure out a workaround.

I discovered that if I removed the mounting bracket on the engine block and sawed a 1/2" off of the rear that a Subaru SD-508 air compressor (110 dollars at NAPA) would bolt right on. Both high and low side compressor hoses would screw right on with no modifications at all as did the clutch wire connector. So they ended up with ice cold air for a comparative pittance. Go figure.

The MAC man was thrilled enough to cut me a whale of a deal on a new tool box now that his better half was cool and happy.

Of all the various Z cars over the years, I feel the 240Z was the best looking one, and the “purest” example

Didn’t they just get heavier and less-manageable with the increases in engine size?

If you’re talking about the typical 280ZX from the 1980s, I agree . . . those almost seemed like luxury vehicles in my opinion, versus a simple sporty car

Sounds like it was actually a Sanden ac compressor . . . ?!

You are correct. They called them Sankyos back then but Sankyo/Sanden; the same thing.

Not all car collectors are rich.

An un-driven car is just wrong, in my opinion.

Yup…and that’s why I couldn’t be a car collector. What I find funny are the guys that buy these cars and then donate them to a museum. At the Corvette Museum there’s more then one vette with less then 1000 miles and owned by a private collector that donated it to the museum to just sit there. I would never do that…but I am glad he did.

Reminds me of that 57 Plymouth buried in Tulsa. We were hoping to see a pristine car but just a bucket of rust. Might have been a couple parts that could be salvaged but not much. Unveiled by Boyd Codington before he died.

Thing is cars like to be driven. A guy might have stayed in his house for 90 years but he is still 90 years old but with few miles.

If this car had been driven it would have been scrap 30 years ago. There are a valued few that have survived over the years without the usual wear and restoration that are to be appreciated.

I have old cars that I have turned down offers many times, if I had sold them to hustlers that buy and sell cars only to be modified and crashed these cars would not be around today.

On the other hand if that 57 would have been out on the street there might have been something left of it. Rusty probably but still maybe rebuildable. At any rate I was strongly considering driving to Tulsa just to see it but glad I didn’t. What a disappointment. Nice to have museum pieces too I guess, just don’t bury them.