I think everyone is getting the wrong idea on this post. As I have mentioned a few times, the dealer has been fantastic. I don’t think I have once said they have done anything wrong. But I also have not been a pia and demanding. I have already left them a glowing review and have done everything I can to show them I appreciate the great service they have given me.

My real goal, by posting here, was to understand which direction to go. As I mentioned, I am going to have to make a decision and my goal here was to understand the benefits and implications or having them repaint vs not.

You are 100% correct, they are doing a good gesture. Any negotiating power I had went away when I drove off the lot, and I fully understand that. With that said, I did just spend a huge chunk of money with them, and they do have incentive to do the right thing. I am honestly not trying to take advantage of the situation. I am just trying to get it resolved and move on.

I was not implying that the dealer needed or should replace the whole 1/4 panel on my car. I was simply pondering if they ever do, or if it ever becomes cheaper than painting in a situation like this.

for a paint scratch- no. Replacing a quarter panel- with the wiring, bolts, welds, etc that are involved in all of that, not a chance.

a tape off, sand, and repaint is a much better, cheaper, and easier route.

having said that- we haven’t seen the scratch you mention. But since the dealership tried to buff it out- I don’t see how replacing the whole panel would be a viable option.

I just got a call from the dealer. They are actually going to pull a 1/4 panel from a different matching vehicle and put on mine. Then they can take their time repairing the one from my car, allowing the necessary drying time and such. Picture attached. This was before they buffed it. I really don’t know how we all missed it when I picked up the car. I will say, it was in the evening (so not bright outside) and they pulled the vehicle under an overhang, so the lighting was poor. 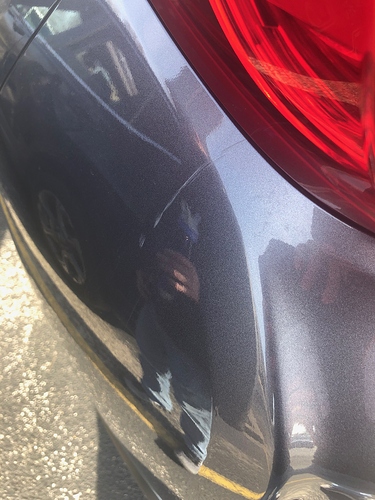 I think that is a picture of the bumper cover so there will be no welding involved as there would be in replacing a quarter panel. Bumper covers take about 20 minutes to remove.

I am just trying to get it resolved and move on.

If that were the actual case when they said they would take care of it you would have said 'Thank You ’ and just waited to see the final solution.

I drove it very little over those 4 days and the scratch is in a very odd spot. It is just under the tail light. If you look on the tail light on the 2019 CR-V, it sticks out further than this area. The area where the scratch is located is in a recessed area essentially and it was a vertical scratch.

I’m glad you’re getting it fixed and they are taking care of you. Just looking at the photo, it’s not that strange of a location for this type of scratch from my viewpoint. Bumper covers will usually flex quite a bit and there could be many types of impacts or ways for that kind of blemish to occur in parking lots- at least around here

Just to chime in some more, yeah, that’s not the 1/4 panel but the bumper cover. It looks to me though that it might be a crack in the paint or shrinkage. The bumpers are plastic and flex a little but who knows from here. They’ll take care of it anyway.

Just a little more on repainting though. Don’t be afraid to have panels spot painted by a good shop. After all there are only a few paint suppliers and they use the same stuff at the factory. Way back in 1968, my roommate in college who had money, bought a new Pontiac GTO. There were a couple slight paint dimples in the hood. The dealer repainted the whole hood and there was never a problem and you would never know it. And that was back before all the polyurethanes of today.

It sounds like the dealership is willing to go above and beyond the call of duty and just replace the panel with another matching paint version. Good for them. There is some risk however that it won’t match as exactly as the current one does. But if they’ll replace it gratis, probably best to go that route.

I noticed a minor paint problem on the hood of my newly purchased Corolla. A few little blotches and spots didn’t quite match the other paint. A little research showed this was a known problem at Toyota, some contaminated paint at the factory got in the mix I guess. The dealership said they would repaint the hood for me under warranty, but warned me the color and appearance might not match exactly with the rest of the car. I gave this some thought and decided to just keep my original paint job. Now at the 27 year mark, given the close to new-car like overall appearance of the paint, I think just living with a few innocuous spots on the hood was the best decision.

I think that is more or less what I did. And then I did research and asked the cartalk community their opinion while waiting to hear back from the dealer. I really do not think myself or the dealer handled wrong, but you seem to think so. I think you are making assumptions about how this was handled, which are not accurate at all. I really do thank you for your time and input on this though.

I tried to post this yesterday but this forum said I posted too much. Attached is a stock picture of the location.

I posted a pic of the actual location in response to another person.

I was open to repaint, or really whatever the dealer thought was the best solution. They just offered this as a solution.

Take a look at the second photo I posted i the thread with a stock photo pointing to the actual location. Is that the bumper cover?

Is that the bumper cover?

When you pick up the vehicle the work order will have the part number on it . And if it doesn’t you can ask them or just drive on and quit obsessing over this . This dealer is going way past what they really have to do because it will never be known if it was there when you got vehicle or done after that.

I am not obsessing. I am trying to educate myself and communicate with a community that likely knows much more about cars than I. I really think that is the best approach when a person encounters a scenario where they have to make decisions about something. Learn and ask those who already know.

Every post you have replied to has been assuming and negative in one way or another. I am sorry you feel the way you do about this. I really was just trying to discuss with the cartalk community, which again, is much smarter than I in this field I am sure. I appreciate your help, but if you could just step out of the conversation it would be appreciated. Thank you again.

Is that the bumper cover?

Yes, that is the bumper cover which makes the repair at lot easier for all parties as it is bolted on to the body of the car. They can removed the other one beforehand, ready for You when You bring the car in and get You out again quick.

Not always, haven’t you noticed he’s been very nice lately

Absolutely, that’s why I restrained myself and just wrote grumpy in the hope that further improvements are in the future.