Either a Lambo or a Pontiac Fiero with a body kit made to look like one.

I think mleich is right, it looks like some kind of kit car, the real Countach has vents on the rear fenders.

Looks sort of like a Pantera…except the exhausts are wrong (as is the badging). Not a Lamob Countach…too smooth. Those have lots of angles all over them.

You got it, chaissos - it looks like a modified Pantera (wheel flares).

There was a vehicle made by the same Italian company that made the Pantera for Mercury. It had a very high performance 302 instead of the 351 the Pantera had. I do not remember the name of this car but I think that is what is in the picture.

My vote is for De Thomaso Pantera, for what it’s worth. Google some images…they seem dead on matches.

DeThomaso Mangoosa, that is the car I was thinking about.

The Countachs looked all patched together, as if to compensate for design mistakes, The wheel well arches were not integral to the main body, the rear scoops looked like they came from PepBoys, the front splitter looked like an add-on, even the vents on the rear fender looked like an afterthought.

The photo is a Pantera.

Yeah, I think it’s a DeTomaso Pantera, I’m guessing a 1972 judging by the line of the rear hatch seam. The exhaust is suspect, though. I thought the Pantera had dual exhaust with twin ports. 'Course, custom pipes are easy to get.

You guys are correct. It’s a modded Pantera GTS. The center-exit exhaust wasn’t a terribly uncommon mod (well. . as not-uncommon as any mod to a car as rare as a Pantera can be)

Here’s another take on that mod: 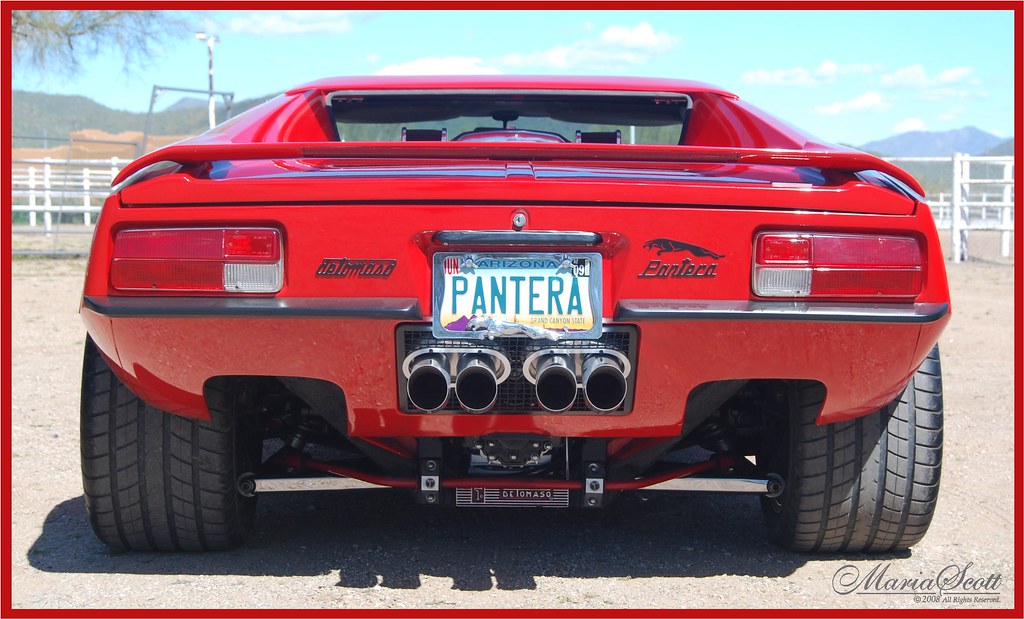 The later Countaches were “patched together” as far as having a body kit stuck on them at the factory. The original ones were much more organic, but as the angular lines became fashionable Lambo responded by covering up the curves with the body work. Wow. They really got carried away with that 25th anniversary edition!

Yikes. Looks like a dream ride for Vanilla Ice c.1989.

Yeah. As an 80’s exotic fan, it’d work for me if it weren’t for those stupid bumper extensions on the front. All in all, I like the Diablo’s looks much better than the Countach.

Of course, having driven one once, it’s not a very fun car at all except in a straight line at full throttle. The visibility out of the thing is like looking out a mail slot. You have to open the door and lean way out to see behind you when you’re backing up (as Morley Safer discovered during a fun 60 minutes piece on the car which you can still find online), and the door panels seem to come up to your eyebrows (the horizontal crossbar halfway up the windows doesn’t help with this impression), which limits sideways vis as well.

Also fun is that under acceleration, you’d better hope you don’t have to turn, because the thing just about picks the front wheels off the ground from the torque.

Still, it is fun from time to time to drive something that’s truly, dangerously insane. That car qualified by a wide margin. That said, I’ll stick with my MR2. Fewer tickets that way, and a lot more fun when the road gets twisty.

I hereby christen that car, “Bruno.” There. I named it.

Its a Pantera GT5. The logo is blurred a little. It was made after the production run for Mercury was completed. It still has a ford motor, don’t know which one but it was smaller than the 351W that came in the Mercury. Compared to the Mercury version, only a few of these were made, less than 500.

Some had steel flares and were called the GT5S, this one is the fiberglass version.

I initially thought it was the GT5, as well. It just didn’t quite match up with the versions I know of. I didn’t know an exhaust mod like that was common. The GT5 didn’t have them like that, though.

The badges are fuzzy but I think you can make a case for GT5. There are pictures at a site panterainternational and a reference to the word above the GT5 that is consistent with a name of a later de thomaso model that doesn’t look anything like a Pantera. The wing is slightly different than some of the photos. De Thomaso went on to make the Pantera under their own name after the Mercury run ended in 73 but only made a few each year up to 2004 so there could be a lot of inconsistencies from one car to another.

I would call it “Tornado”