Mysterious windows have a mind of their own

Hi Car Talk! I’ve started experiencing the supernatural effects of my 1996 Mercedes C280. For a couple months, the driver side window would spontaneously decide to roll itself down, usually at inopportune moments (when raining, during important phone calls, or sometimes just for fun on a sunny day). Usually it would go right back up when I pressed the button, but sometimes it could take 5 minutes before it was ready to close. After a few months of this, everything flipped! Now the driver side window has no problems (except it will no longer obey the one-click automatic rolldown), but none of the other windows will go up or down. At first I thought it was because I have a new battery, but that actually seems to be working better than ever as my car roars to life like never before. I also used to have a little rain water dripping into my trunk (forgot to clean leaves out of the seal) so it’s possible there is some computer or fuse damage. I have already tried replacing the master window switch and nothing changed. Please let me know what it could be! I love having a mysterious car with its own sense of consciousness, but at this point, I’d prefer to be able to roll up my passenger window which is now stuck permanently in the down position. Thanks in advance

You could check your wiring. The most prone place for damage would be where wiring transfers from car body to door. They are flexed everytime you open and close the door.

Thanks @tcmichnorth. I will check into that. But pretty sure it may be a larger electrical issue or computer problem since all windows stopped working at the exact same time. Planning to replace fuses or look into getting a new fuse box? What do you think?

I have to ask, because I’ve seen it before.

Is the window lock button set to lock?

No, I did check that already. Thanks for asking

I haven’t the luxury to examine the thing, so I’m going with the most obvious solution. This to me would still be a wiring issue. The fuse(s) may be blown, but they blow for a reason. And wiring is the most common cause for blown fuses.

I would open the door panels and see what is going on in there.Could be a mechanical problem instead. They could start to bind a little.

larger electrical issue or computer problem since all windows stopped working at the exact same time.

All of the windows’ controls are routed through the driver’s window panel. So damage one wiring harness there and all of them can either quit working or go crazy at the same time.

@shadowfax, even if the main window switch is in the center console on a ‘96 Mercedes c280? So we don’t think this has anything to do with water damage in the trunk to fuses or computer?

Well, I don’t think the ECU would have anything to do with it, but it looks like there’s a “convenience module” under the spare tire well cover, held in by 3 screws. From what I’m seeing, it’s prone to solder failure which can cause all sorts of electrical gremlins. I’d look there.

@shadowfax I just checked under the spare tire well cover and there was no convenience module there. I agree that it looks like a likely culprit, but so far I can’t seem to find it anywhere in the 1996 Mercedes C280. Is there a good place to find a parts diagram for this kind of thing?

@shadowfax wow, you called it. Thank you! Was tucked in against the battery. Board must be fried from water damage. Getting one off eBay for $50. Planning to clean the contacts with vinegar, then contact solution, then dielectric grease to prevent future corrosion. Planning to swap out all the fuses as well. Anything else that I need to do while I’m at it? Thanks again for putting me on the right track 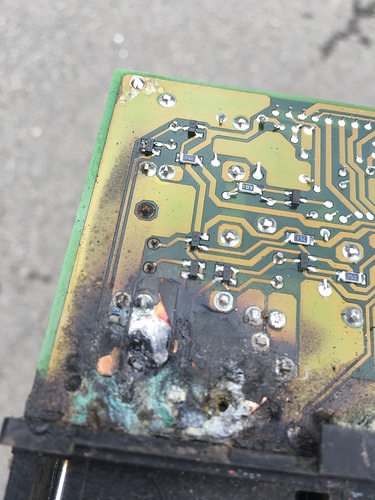