We have a 1999 Chrysler Town and Country mini-van with 156,000 miles on it. There is rust damage to the left front strut suspension tower. Suspension has fallen onto the tire. Got an estimate for $2000 to fix. Does that sound right and should we fix it? I would really like to hold onto the car for another year but $2000 is too much.

Many Questions Asked Here Have A Fairly Clear-Cut Answer. However, Sometimes The Vehicle Has To Be Seen In Order To Answer With Any Certainty.

My first thought is how did this vehicle get so rusty ? I don’t think this is a common problem. What exactly rusted and what is the remedy ?

How many estimates have you received ? Is it driveable ?

A body shop or even an auto salvage yard (one that repairs cars, too) may be the way to go in getting it patched up. Some salvage yards repair and sell vehicles. That’s where I’d check. They’ve got experience in this type repair and should be reasonable.

I would not spend any money on this van.

Sell it for parts or junk it.

If one suspension tower is rusted through the other three are not far behind. Are you willing to spend $2,000 for each tower?

I don’t even see this as a money issue. I see it as a safety issue. Collapsing suspension means the vehicle is NOT safe to drive.

Get rid of it.

I believe this vehicle has only two strut towers. I have to wonder if the rusted out tower could be repaired for far less than $2000.

Wow, It’s Beginning To Look Like I Was Possibly Correct. This Problem Is Common Enough To The Point That Inexpensive Aftermarket Tower Repair Caps Are Available. Chrysler Makes A Kit, Too. A Quick Search Turned This Stuff Up: 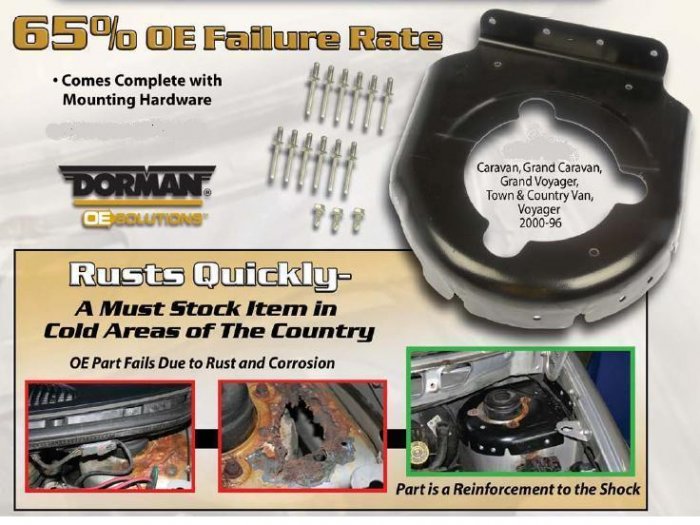 Struts are different than shocks. Here's how struts work, how to test struts, when to replace struts, and what they cost to repalce

Check around. Depending on your particular vehicle, a repair should be possible. Find a shop or two familiar with this. They’re out there. A repair should cost way, way less than $2000. Welding does not seem to be required. However, the special type high tensile strength epoxy (like Fusor) must be used. Chrysler includes it in their kit. I’m not sure about others.

At least Chrysler offered this as many families get socked with their lightweight engineering approach to this vehicle.

Still looking at CSA’s excellent posts of what you are covering up I would be nervous putting my family in a vehicle with that severity of rust.

Just found out that our beloved '99 T&C, I’ve owned for 10 years, with 160000 miles has a serious rusting suspension, when a coolant hose decided to leak near the firewall. The mechanic said the repair will cost more than the value of the van. The rusting suspension has been verified by 2 mechanics.

I’m sad because the 3800 v6 engine runs like butter, meaning when I take my foot off the gas, I have to use brakes to slow down, as it slows so slowly. We can get 32 mpg on trips. I love my heated memory seats and awesome stereo system.

We fixed the erratic starting issue ourselves, after banging on the dash to help it start for months, with the help of a youtube video, we soldiered a connection on a board in the dash. That took us 2 hours on a pleasant day. But, by waiting too long to fix it, our speedometer is off by 17 mph, parked. So, 72mph is our 55mph, and was eased by using cruise control. Eh.

So, we’re researching for our next vehicle and have bought a cheap '04 Montana van with no rust, missing some nice features, and now realizing some pesty noise on bumpy roads.

Maybe somebody needs that engine to repair their own car. If you can locate that person, try Craigslist etc, you maybe can get more than $500 for your vehicle just by selling the engine. I expect you know that any rust problem your vehicle has can be fixed. When they say it would cost more than the car is worth, which is probably true b/c a nearly 20 year old T&C with 160K isn’t going to bring much, but that itself doesn’t make it uneconomical to fix. The alternatives have to be compared. How much will new car cost? What about new car insurance? New car yearly registration fees?

Strut tower rust was common on that generation; it contributed to the demise of our 1999 Plymouth Voyager. Other generations of Chrysler Corp. minivans do not have that problem. Our 2007 Town and Country suspension is holding up fine, has much better headlights, and the reliable venerable V6 engine.

we soldiered a connection on a board in the dash. That took us 2 hours on a pleasant day. But, by waiting too long to fix it, our speedometer is off by 17 mph, parked. So, 72mph is our 55mph, and was eased by using cruise control. Eh.

Dunno but perhaps too much banging on dash during time it was intermittent caused the offset error in the gauge?

Good for you!
I have a similar van and can completely relate.
Your van really might still have value to someone else, like those at this van forum site:
http://forum.chryslerminivan.net/forumdisplay.php/30-3rd-Generation-Chrysler-Minivans-1996-2000