1993 Dodge Grand Caravan - Where to get cheap struts?

I have a '93 Dodge Grand Caravan (yeah, I know), and the struts are bad. I am trying to figure out where to get $700 to replace them but for now I just tolerate the poor ride quality and avoid doing anything sporty. Can I just go on suffering the ride or am I heading for a catastrophic breakdown?

You can buy quick struts because they are set up for quick installation.Springs are already mounted on the struts so you don’t have to deal with a spring compressor.Munro has quick struts for your van. The handling, ride quality and braking will be much better with them.

Can I just go on suffering the ride or am I heading for a catastrophic breakdown?

Without actually seeing the struts in person that can’t be answered . But if the ride and control are poor then it could be a real problem at any time.
It sounds like you are going to have this done and if so start calling places for estimates and see if any have a financing option. Do you not have a credit card ? Even if you have to pay interest it will be less expensive then a wreck and towing .

$700 seems a bit high to me. I had the front struts, rear shocks, and some other suspension pieces replaced on my Dodge Challenger for about $1200.

That isn’t a dealer price is it? I’d definitely shop around for more than one quote.

Are you doing the work yourself or paying somebody else? Do you have a trusted mechanic/shop?

Many repair shops will not let customers supply their own parts, and they make up a bunch of reasons and excuses, but they want the profit from marked up parts prices.

I have an experienced “retired” professional dealership mechanic who operates a clean, modern, shop at home. He does not mind using parts that I supply for my vehicle.

Your parts can be purchased from an online store, such as Rock Auto (They rock in my opinion!), for probably less than 200 bucks ( 2 front strut/spring/mount/bearing assemblies for easy installation & 2 rear shock absorbers). I choose parts with the red heart icon

It wouldn’t be a big job for my guy to lift the car on a hoist and bolt those parts in place. His labor would be well under 200 bucks, probably under $150.

The car will need an alignment after the installation. That will cost probably an additional $75 to $100.

I have an older Caravan, also. Keep in mind that for a 93 that’s not likely to become a valuable classic or collector’s car, you don’t want to see how much money you can put into it.

One downfall of some of those older Chrysler minivans is strut tower rust. It’s wise to investigate that body area where the tops of the struts mount. It’s a highly stressed area and if too rusty, not a secure one for your front suspension to rely on.

And for a '93, you might also have to deal with worn out suspension parts contributing to the problem. Ideally, you’d have a trusted mechanic who would take a look and tell you what all is needed to keep it safely on the road (expect to pay them for this).

When you operate a vehicle with worn out struts, it puts a burden on other steering and suspension components.

But probably the most dangerous part of operating a vehicle with worn struts is, it can result in a broken strut spring.

And when that occurs, this can happen. 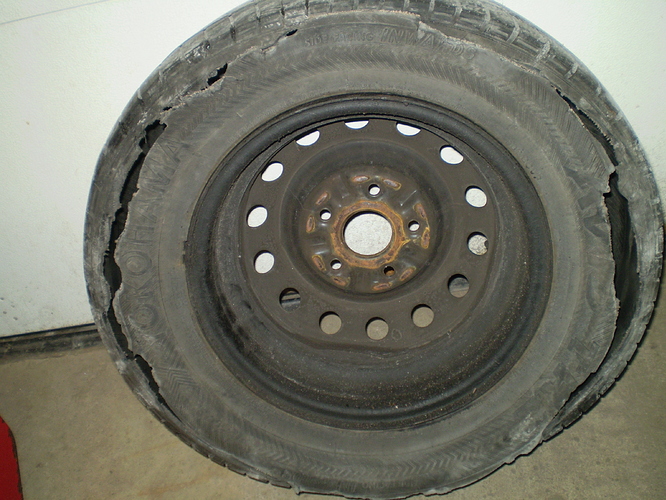 Yes, primarily the one behind the battery.

All good replies on things to think about.

I especially agree with Shanonia’s reply about checking for strut tower rust before replacing the struts.

The Dodge/Plymouth/Chrysler vans of that vintage were known for rusted strut towers.

Strut tower rust out is a common problem here, we have welding shops that have new tower tops already made up to weld in. It won’t get you more than a tear or two though because if the strut towers are rusted out, other critical parts are not far behind.

I replaced my own struts in my 92 Plymouth minivan and did not use quick struts. The parts store loaned me a free spring compresser. The struts were about $14o and an alignment was $80

You mean that was an option to begin with?