Can someone recommend a very low profile ratchet? I would imagine 1/4" drive would be the smallest. I also need low profile sockets. Can anyone recommend a metric set? This isn’t for serpentine belt, but for some 10 mm bolts that are in a very tight place.

Thanks for any help.

How about a ratcheting box end wrench with a pivoting head? 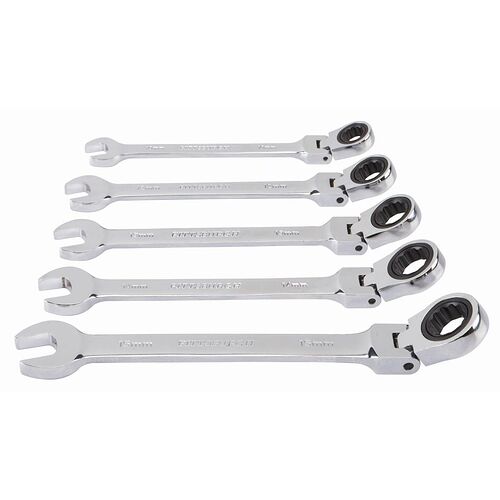 You put a socket on one end and turn the other end with a ratchet.

How about a ratcheting box end wrench with a pivoting head?

I think Texases has the best answer for tight spaces. Which modern cars seem to have an abundance of!

a ratcheting box end wrench with a pivoting head?

These can be EXCEPTIONALLY handy at times. You nearly always have the option of using an open-end wrench… sometimes 1/2 flat at a turn!.. but these can make the job much easier!

I bought a hf 3/8 breaker bar to fit the serp belt tensioner with very tight clearance. The only one they had was a ratchet. It was too wide and ended up using my inch torque bar with a pipe instead. Ratcheting wrenches are nice but expensive if you don’t need a lot of leverage but I have a collection of adapters so I can use even a 1/4 ratchet with a 1/2 socket. Been used many times for those of us not needing or space for a hardware store at home.

I think there’s a low profile ratchet/socket design (I believe offered by Craftsman) where the top of the socket fits into a hole in the ratchet head, rather than the conventional design, socket fitting on a protruding square piece of the ratchet head. I found a ratchet and socket of this design laying in the road last winter. IMO the socket doesn’t seem particularly sturdy. But it does provide a lower profile where access might be a problem. Looks like Harbor Freight has something similar. 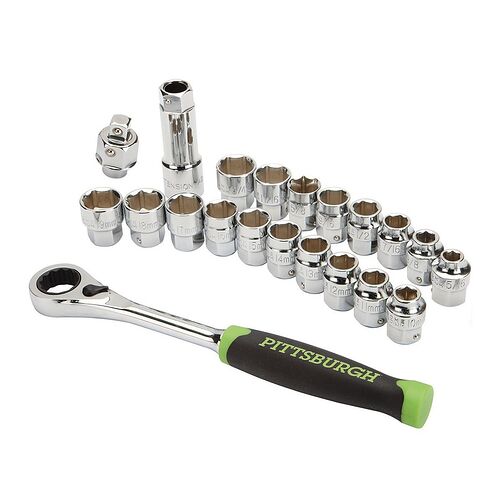 I expect the ratcheting combo wrench idea posted above is the better compromise when low profile is needed.

If a socket works better for the task, but the ratchet won’t fit, there’s an adapter gadget that allows you to turn the socket with a wrench. I have a version of these, and find them useful sometimes. 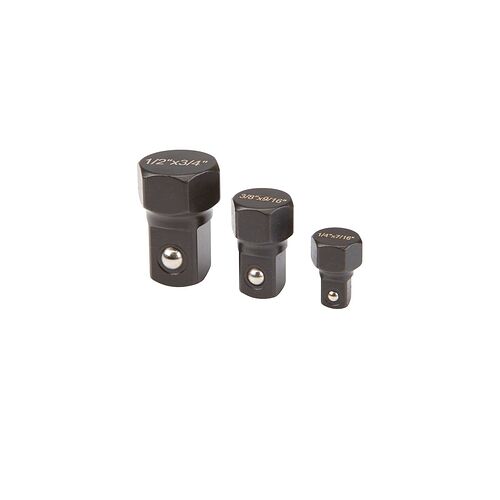 I’ve used a pipe wrench to turn a socket too sometimes, in my case for turning large sockets. I think when I did that, I had a 3/4 drive socket but no 3/4 drive ratchet. You’d need a really small pipe wrench for this to work for most car-related jobs.

Thanks for the tips guys. I found some interesting tools.

In my application, I defiantly need a tool, were the part of the tool that grips the bolt is at 90 degrees with the lever to allow for unscrewing the bolt. I’m dealing with a very small area, where a typical box end wrench, I don’t think would work. A Extender Adaptor Extension Bar Handle would work great as well, but I think the chain in them would cause the overall thickness required to be more than I can allow.

I did some investigation into this issue.

Ratchets tend to not have a thin profile head, even the thinnest of ones.

So I started looking into the following such of tool. A thin lever tool 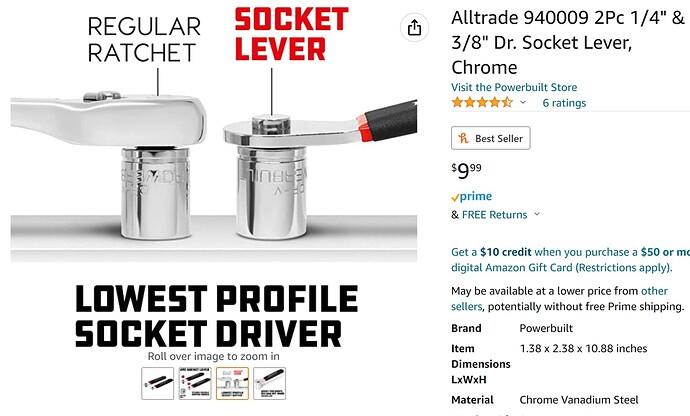 Then I started to look for sockets. My current 10 mm socket is about 3/4 inch in overall length.

Then I started to look for sockets who are smaller in overall length. I couldn’t find anything.
But then I stumbled upon a tool brand I haven’t heard of before, Wera Tools. 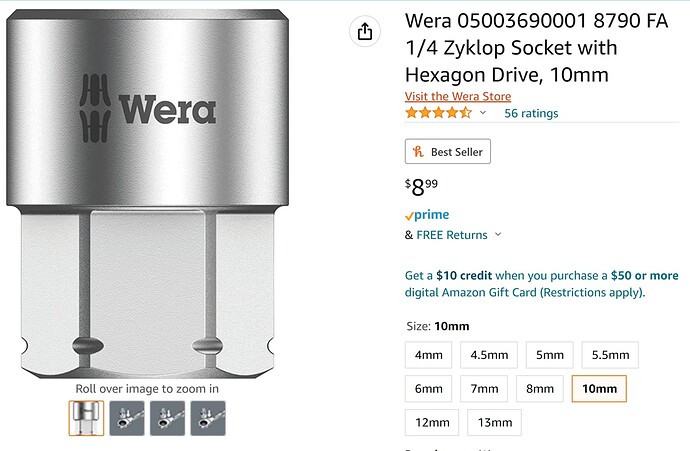 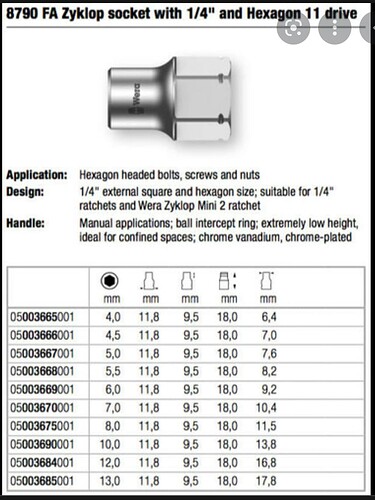 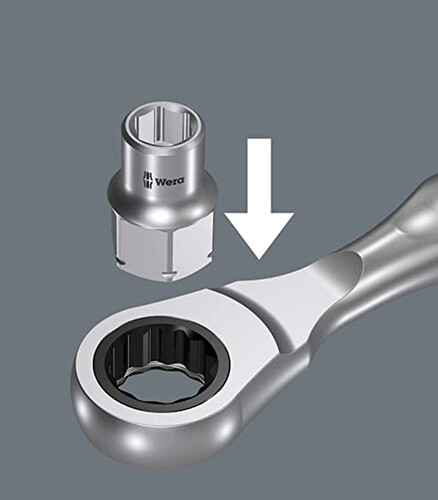 image975×1113 67.2 KB
Overall length of 18 mm, 1 mm less than my current smallest overall length 10 mm socket.
Interestingly these sockets have a hexagonal drive on top of the 1/4 inch drive. Meaning I will be able to just use a regular box end wrench. Meaning I can completely get rid of a ratchet or lever, and only need 18 mm of space above the bolt.

Take that hex socket and use a flex head box ratchet.

But then I stumbled upon a tool brand I haven’t heard of before, Wera Tools.

Amazon is loaded with tools and other products with unknown and weird names that hardly anyone has ever heard of . Many of them are not worth the time it takes to read about them .

Amazon is loaded with tools and other products with unknown and weird names that hardly anyone has ever heard of .

If you were a mechanic, you would of have heard these high quality tool brands.

Every day the 750 Tool Rebels enthusiastically go about reinventing screwdriving tools and working on solutions for screwdriving problems. We are always looking for new ideas. We think differently. We question - with the aim to create better...

I had a difficult to remove nut experience a few years ago. You are welcome to read about it here, may give you some alternative ideas… Quick summary of what worked best in my situation, place vise grips snug on the nut, jaws oriented 90 degrees to the nut, twist the vise grip jaws with a wrench. An open end wrench where the jaws were oriented 90 degrees to the shaft would have worked too, but I didn’t have one. Best of luck.

BTW, IMO you can never have too many tools. The only problem with owing a lot of tools, it seems like by the time most any semi-complicated job is complete almost all the tools you have are on the floor … lol …

If I understand the situation correctly, this is where I “leverage”

my flare nut wrenches. They are open about 1/4 of the circumference and so engage more of the fastener than an open end wrench but allow for clearance issues on one side of the fastener…

I’m probably a slow learner, but I don’t see how adding height to a ratcheting box end wrench is going to improve your situation. If a slim box end wrench won’t work, then making it even thicker is not going to solve the problem.

There could be something nearby interfering at the level of the fastener, but a little above has some room for the tool to twist the fastener.

As for sockets, if I need something specialized I take an inexpensive (usually) socket and modify it. Most painful was an expensive Snap-0n 10 MM offset wrench which I walked off the truck with and butchered with a torch. Did what I had to do as there were zero options and both MAC/Cornwell had nothing similar.

I’ve cut several sockets down on a metal lathe for a cleaner, more professional cut and appearance but that may not be practical for you. Around here machine shops have a 75 dollar minimum.
Next option; a grinder. It works but rules out socket use on protruding studs.

My bad for not explaining it well. A regular wrench or box end wrench, the outer part that grips the head of the bolt is to thick.

I looked at their website. Wera tools has some neat tools. They appear a bit expensive though. I guess they are a German brand.

image729×1476 165 KB
200 bucks for a set of wrenches though, yikes.
I get that it’s unique and all (at least I don’t know of another company that has this type), 7 point combination wrench shape looking thing on the open end, and the box end is 80 tooth ratchet type, that’s a little bit more than the typical 72 tooth, they call it joker

I also thought about just taking a grinder to a socket. 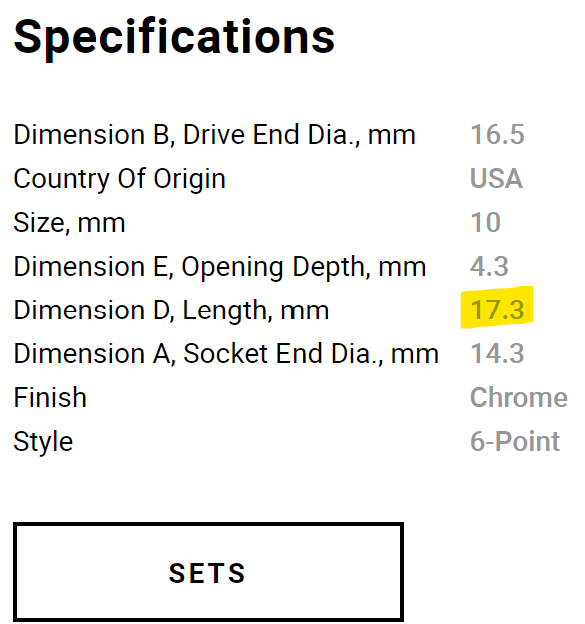 I found something else as well. At one point Snap-On manufactured a twist socket whose overall length was only 9.5 mm!

Assuming I can find the part above from a third party, is there anyway to modify the twist part of it so it’s a normal socket that wouldn’t damage a bolt or nut? This would seem to be difficult.

If I took the snap-on one that is only 17.3 mm chrome, could I really just take an angle grinder and grind it down so it’s overall length is less?

Any way you could post a photo of this problem bolt/nut, so we can get a better idea what you’re dealing with?