I’ve got this situation removing a faulty fuel tank valve (used to manually switch between two different tanks, located in the passenger compartment) on my truck. For some reason Ford designed it so the nuts that hold it to the mounting plate are both right up next to the valve, so there’s not enough room for a socket to slip by and fit on the nut. The wall of the socket hits the valve in other words. I’ve tried all my 7/16 " sockets, no go. And a combination wrench, still won’t fit.

I got to thinking they must have installed it somehow, so there must be a way to remove it. My theory, it was probably installed from the other side of the mounting plate, a screw or bolt head there. But that side’s been on the underside the truck for 43 years, what a rusty mess. Plus I’d probably have to remove or at least re-position the aux fuel tank to get needed access from the underside.

One idea that would work, I could just cut the nut and bolt clean off with a Dremmel tool. The problem w/that method is, the valve is leaking gas a little, that’s why I’m removing it, so there’s gasoline fumes. Sparks from the Dremmel tool and gasoline fumes? Seems problematic.

The only idea I can come up with is some kind of a thin wall socket. Anybody else ran into this kind of problem with some ideas?

Would a crow foot wrench get the nut off

Good idea @Rod_Knox ! I’ve got a set of CF’s, but didn’t even think about that method. The combo wrench won’t work b/c to get the angle needed to meet up w/the flats on the nut, the wrench handle hits the floor. Even a stubby combo wrench has the same problem. But a crow’s foot might just work. Definitely worth a try. Thanks.

I have a 5 gallon bucket full of combination wrenches that have been bent in various angles to enable getting into difficult spots. The ones that remove the EGR valve from 2.5L Tech 4 engines and the one to fit the bolts on the Escort timing belt tensioner come to mind.

And are you working on an old Bronco?

How could repositioning the aux fuel tank help? That tank is under the bed, correct? Is the valve you’re working on on the floor of the cab? If so that’s an aftermarket valve, not factory installed.

Can you post a picture of the offending nut and bolt?

No, aux tank is on the side of the vehicle. It’s the original valve.

Is this your valve

In the past I have ground down the sides of the socket to get it to fit a tight space. You can really grind them quite a bit and they are still serviceable. I don’t think I’d do it to a Snap On socket but a cheaper one.

Oh yeah and use that Deep Creep stuff.

I’ve seen sockets with a hole cut out by the user - maybe with angle grinder… an access hole. Perhaps a strategic gap or two?..

I had this problem before on 350 Chevrolet intake manifold bolts so I bought a socket and ground around it to make it thinner and it worked. It might break on your truck but it worked and I used the socket many times.

This suggests there’s a special tool the shop uses - call the manufacturer or local dealer, ask? Or a skillful guy on eBay or their own website, might be making something?

They also do sell thin wall sockets. Whether or not they would be thin enough for your application is another story, but you can get them cheaply enough.

If I understand the situation correctly, this is where I “leverage”

my flare nut wrenches. They are open about 1/4 of the circumference and so engage more of the fastener than an open end wrench but allow for clearance issues on one side of the fastener…

Yes, that photo above is what the valve looks like. You can see there’s little to no clearance between the nut and the valve for a socket to fit. I did finally remove the stubborn nuts though. I tried the crows-feet, but no-go. Still had clearance problems. Vise Grip pliers is what worked.

No room to grab hold at the noon or 6 o’clock position, but 3 and 9 o’clock, plenty of room. So I installed a vise grip plier on those spots, and used a big screwdriver in between the jaws of the pliers – this method isn’t in the user’s manual as far as I can tell – as a lever to twist the nut. I couldn’t get it to budge even so in the lefty-loosey direction, but I did get it to move a little in the righty-tighty direction. After that the nut broke free of its rust-imposed 43 years of co-mingling with the bolt, and it was just a bunch of cussing to finally twist it off.

Meanwhile, with all the Liquid Wrench penetrating fluid applied in that area, and more room to maneuver with the nuts removed, I decided to try again to see if I could tighten the valve mechanism to seat it a little tighter into the valve body. Another partial success, it rotated 1/4 turn, which seemed to stop the gasoline leak. For the present anyway.

The bolt didn’t twist. It may be a carriage bolt, you know with the little square next to the head, fits in a square hole in the flange so it won’t twist.

I got to thinking what tool would have been the ideal one to remove that nut? I mean besides vise grips or grinding on a socket. What would have worked straight away I think is a plain-old open end wrench, but with the opening set at 90 degrees from the handle axis. Something like this 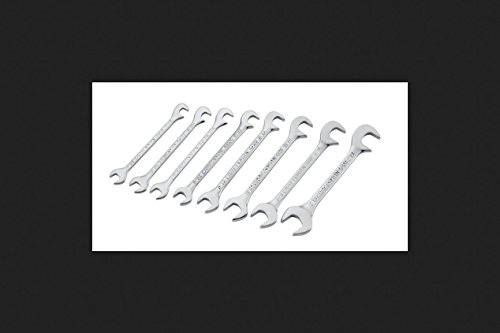 Craftsman Standard Open End Ignition Wrench Set -- Just the Angle You Need. Working on your car and lead to trying to cram yourself and your tools in to tight and awkward spaces. The Craftsman 8 pc. S ...

This version of a flare wrench wouldn’t have worked, clearance problem still:

Are you referring to another version of a flare wrench @wentwest ? A tool that was configured sort of like a socket with 100 degrees (in angle) open might have worked. So a version w/the head of the flare wrench bent at a 90 degree angle to the handle?

Now throw that worthless Liquid Wrench stuff away and get some PB Blaster or Deep Creep. Of course just in my humble opinion but I’ve never that I can remember, saved a rusted bolt with LW.

To get a nice, even grind on the outer circumference of a socket, get one of those socket adapters that convert 1/4" hex drive to 1/4", 3/8", or 1/2" square drive. Put the hex part of the adapter in a drill, attach the socket to the other end, and run the drill at a low, constant speed as you hold the socket against a grinding wheel. Maybe not as good as a lathe, but infinitely less expensive and usually produces a socket with a pretty uniform wall thickness.

I’ve made a complete set of ‘thin wall’ sockets out of middle-of-the-line tools and have yet to have one fail, and I’ve put quite a bit of torque on some of them. Twelve point sockets have a more ‘round’ ID configuration, and thus the outer wall can be ground thinner than six-point sockets without sacrificing structural integrity.

I used a vibratory engraving tool to re-mark the size of each socket to avoid guesswork. I couldn’t tell you how many times I’ve used this set of sockets. Over and over and over again, they’ve saved me time and frustration with bolt heads that are just too close to surrounding components to use a standard socket. The walls are thinner than the thinnest ‘thin wall’ socket and still work just fine.

Penetrates tested for break-out torque on rusted nuts, with interesting results, especially how we’ve come to rely on PB Blaster… They arranged a subjective test of popular penetrants, with the control being the torque required to remove the nut from an equivalent “scientifically rusted” environment:

Note the “home brew” was better than any commercial product in this one particular test. A local machinist group mixed up a batch and all now use it with equally good results! Note also that “Liquid Wrench” is nearly as good as “Kroil” for about 20% of the price…