I miss the show

this is worst than a car problem. Your weekly show will not play??? tried a laptop and my phone? Got to have my weekly Cartalk. Thks

Why did you choose “Ask Someone “ category rather than “The Show” category?

Posted here after I made my comment on the “ask someone” post.
“Ask Someone” posts do not show when “all categories” is selected, therefore fewer views.

Your weekly show will not play??? tried a laptop and my phone? Got to have my weekly Cartalk.

I’ve listened to all of the recent podcasts through 2159 , haven’t had any problem. I expect you are having some sort of technical difficulty on your end. I use the NPR website (below) to download the mp3 file to a desktop computer, then copy it to my portable mp3 player. It’s possible there’s some sort of problem w/shows 2160 +, haven’t tried listening to those yet. 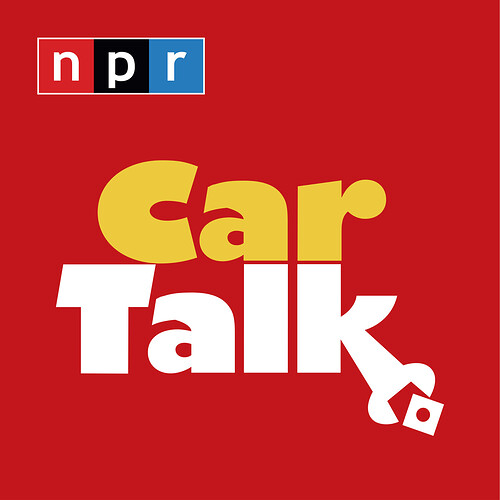 The Best of Car Talk

America's funniest auto mechanics take calls from weary car owners all over the country, and crack wise while they diagnose Dodges and dismiss Diahatsus. You don't have to know anything about cars to love this one hour weekly laugh fest.

Note: What seems to work best more me is to right-click on the icon with the down-pointing arrow, then choose “save as”.

If you are trying to download the podcast mp3 file directly to your phone and listen later, I was never able to get that to work. But I was able to listen to the show on a cell phone (w/ a wifi hookup) using the phone as a web-browser.

I know I should just shut up today but you’ll get over not listening. I think it must have been 20-30 years ago and the weekend radio programming was great. Even NPR had reasonable programing with the car boys, and the finance program and then switch channels before the splendid table with people talking through their teeth.

Then after changing channels, we had our local auto talk that was very good, and we had plant talk where any tree, flower, lawn, etc. question could be answered. And then we had the contractor talk where they would actually talk about building and carpentry. Of course later on were programs like Bruce Williams with not only business but life discussions.

What has happened? I don’t know but radio is ruined from what it was. I suspect it was the corporate consolidation of media but can’t hardly find a thing on either AM or FM anymore of any interest except music. Even the country station play stuff that is close to 20 years old.

Then have a storm come through and I don’t think there is anyone actually in the studios anymore. Just recordings. And I remember we all had press passes to call in bad road reports from all over the state when it snowed. Not anymore. Just some flunky hack going on and on about his political leanings. Sheesh what do we tell the kids?

We still have a couple local radio stations. The oldest started by a local monk in 1922 and eventually moved into town and broadcasting 24hrs a day, studio’s right on the water… Mainly listen to the news/talk radio station out of Seattle that’s been around forever, grabbing the podcasts of the NPR and other shows i want to listen to at my own pace.

We still have a couple local radio stations.

Yeah we have a local station but whatever day it was we had the sirens going off and south of us a little four tornados. So tune in the station and just country music playing, I don’t think there was anyone there except maybe the engineer. In the past it would be live non stop reports. I suppose that’s the future. Turn my phone on and it says “rain will stop in 6 minutes”. Not 5 or 10 or within the hour but 6 minutes. Danged if it didn’t.

The one’s here are better about that, have DJ’s round the clock and still give traffic and school closures when it snows, which is usually the main weather event we have to deal with here.

That took me back, snow overnight, listening to the radio hoping the schools would be closed. My sister had a friend that lived a block away, her family did not listen to the radio in the morning. She would walk the 8 blocks to school only to find the doors locked,

Don’t know if they still do this but the district used to go out at 2am or so and see how a bus does on the roads. One of my teachers watched them go sideways down the hill in front of his house.

Don’t know if they still do this but the district used to go out at 2am or so and see how a bus does on the roads.

The Superintendent usually does that here but now with a lot of distance learning in effect they are a little more liberal. Otherwise only had so many days that could be missed in the year.

radio is ruined from what it was.

I concur that NPR’s line up has deteriorated substantially. I wish they’d get back to their prior how-to and educational format, rather than blasting divisive content. Car repair, financial topics, gardening, etc. How about shows geared to all of America, rather than only one segment of the population. Instead of titles like {enter your favorite group}-America, how about " America’s - America"? It’s not entirely dismal: Their news team is still excellent, All things considered etc.