I have 2003 Crown Victoria with 140,000 miles. I think the fuel filter is original, and the car bucks a little when I accelerate hard. I am thinking it’s the fuel pump, and I set out to change it today.

I now tried to pull off the filter from the line from the fuel tank side. It’s not coming off.
I tried using s spreader that looks like a pair of pliers for using on stuck radiator hoses. That didn’t work.
The fuel filter is rotating on the plastic end of the fuel line, so it’s not frozen together, but it’s not coming off.
I am afraid of pulling too hard, because the plastic part that the fuel filter goes into might break.
I live in New England. So, I am thinking rust.
What can I do to remove the fuel filter?

Thank you for your help.

take the white plastic tab all the way out of the end of the fuel line, and then try to separate it. if you just pull the tab out a little it will hang up the filter from coming out.

This fuel filter does not require a special tool.

it does require a special tool: Ford fuel line removal tool. See WeekendWarriors video link. A cheaper version of that tool can be purchased for under $10. It is a special sized x looking tool, that fits up into the hose and releases the clip holding that end of the line on. (you should have needed to use this tool on both ends of the filter.) 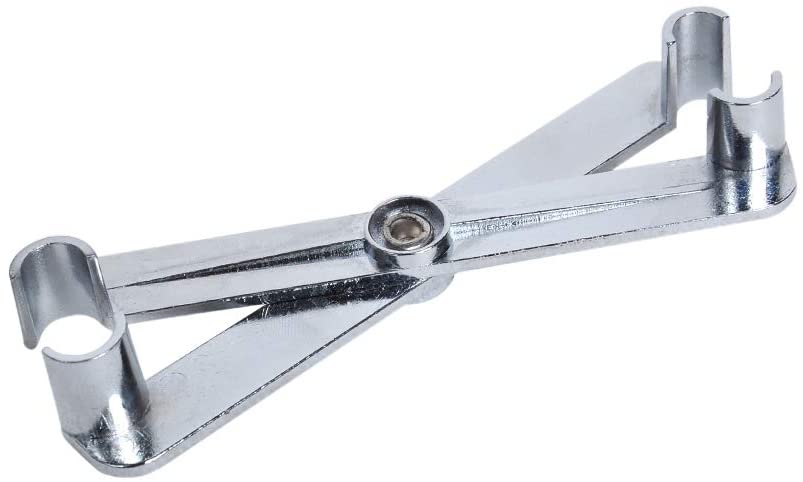 I’ve gone through this a few times with Fords and the difficulty with filter removal was caused by the O-rings in the fuel lines becoming fossilized due to age and gasoline.
Just had to keep pulling and twisting at the same time to prevent breaking the line fitting.

Just an FYI but what can often happen is that with long term operation involving a partially clogged filter the pump can fail at some point. From your post I take it to mean you have or are going to change the pump.

just a thought,
I am not sure how much play you have on the side giving you trouble. you can try leaving the filter clamped and try taking the troubled side off first. it might give you more leverage and less chance of breaking the plastic line because everything is not moving around as much. sometimes you have to just pry/ muscle it off.

I believe those plastic tabs are just a safety measure to help keep the lines from accidentally coming off. My 1999 Ranger has what sounds like the same setup, and I just replaced the fuel filter on Tuesday. Filter has the plastic clips on the fuel lines on both ends, and I have always needed the special tool. The fuel tank end of the filter was a little harder to remove than the other end, I believe because of the orings ok4450 talked about.

What can I do to remove the fuel filter?

Try warming the fitting end with a heat gun or hairdryer. Don’t melt it! Just warm the O-ring up so it will let loose of the filter tube. A little shot of WD-40 first can’t hurt either.

Here are the pictures. 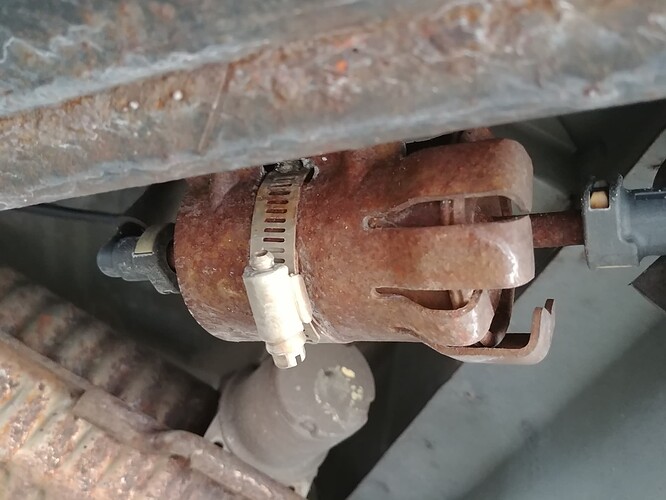 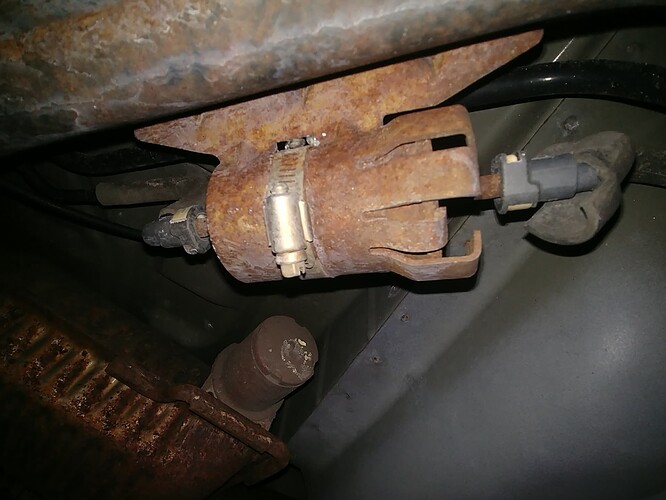 As you can see both use plastic clips. I don’t think I need the special tool to get the fuel filter loose.

I re-attached the old filter, so I can drive the car.
The photographs are before I started working on it. That’s the reason the plastic clips look old.

Also, with the mileage at 140,000, should I also change the fuel pump? It’s been working fine. But I just don’t want to be stranded somewhere.
That goes for the starter, alternator and water pump, too.

I am thinking the fuel pump, starter, alternator and the water pump are not likely to last beyond 200,000 miles, so I am thinking it might be a good idea to replace them now. I think I will definitely drive this car for 5 more years, which would put it at about 200,000 miles.

I have absolutely no experience with this problem; but were I presented with the photo above, I be thinking the task would probably be way easier if I had a special tool designed to open those plastic clips. OP, just curious, what makes you think there’s no advantage using a special tool?

The plastic clips came off with a screwdriver. No big deal. The special tool is for the type of connection that does not use plastic clips. Like this one:

Mine uses plastic clips on both sides.

Thank you for the pictures

That explains a lot

You do NOT need a special tool

That white plastic clip is stuck in the fitting

Did you liberally spray all the fittings with WD40 or something equivalent?

Get one of those WD40 spray cans that has the “straw” nozzle on it . . . spray WAY down into the fitting, while rotating/twisting the filter and the fitting, so that the penetrant gets far down

Have you thought about using a small pick set? . . . the kind you can get at Harbor Fake Tools for chump change?

As far as the fuel pump, starter and alternator go, I’d be hesitant to change parts that are still working fine

However . . . if you do want to go ahead, I’d use very high quality parts

I do have little picks. I sprayed with WD40 but didn’t think about using a pick to get at it. I also have what looks like a pick from a retired dentist. I got it at an estate sale. I didn’t know where I would use them, but they were extremely good quality.

I was thinking about creating another thread about where would you use rebuilt, OEM and original parts. I replaced the heater blower motor with VDO part, and it went bad within a couple of years. The second time, I replaced it with original Motorcraft part, and it hasn’t had any problem for 60,000 miles. I thought, it’s just a motor. Anyone can make it. What could possibly go wrong with it?

Anyone can make it. What could possibly go wrong with it?

Bearings, brushes, commutator, windings, not deburring the motor laminations, poor quality magnets, brushholders… There area lot of ways to cut costs on a small DC motor that affect its life.

Buy why not? A 15 year old car that replaced a part has what? A 3 year life left? Why does the part have to be as good as the original that lasted 15 years?

For those us who keep our cars a long time, we know to buy the best we can get.

JMHO, but if it were me I would consider either a pump replacement or modifying the floor pan (with a trap door) so the pump can be accessed easily. An alternator/water pump is not a big deal but a failed pump on the road could be.

Twice in this family we have suffered a pump failure due to a clogged filter. The first one involved a 1500 miles trip to CO. During pre-trip service I told the better half I had concerns about the pump as the filter was clogged. Not enough time to change the pump so off we go and it nagged at me the entire trip.
On the return leg and 20 miles from the house during a hurricane type storm the pump decided to give up the ghost…

The other involved the daughter in law’s car which I had made a comment about the pump. The claims by the person who serviced the car previously was a bald faced lie; along with the lies about changing the original air filter, plugs, and so on. Eighty thousand miles with the original, plugged up fuel filter. On a road trip in western KS during a July 4th weekend the pump surrendered…