Hey all - I have a 2008 Toyota Corolla LE with about 188,000 miles on it. Started hearing a cyclical creaking noise when braking at slower speeds. Got a brake inspection done and was told my rear brakes needed replacing… My husband replaced the rear brakes (drums, springs, shoes) and it’s still making the noise. I can’t figure out what’s going on!! I’m trying to sell this car and of course this just started happening a week before I’m trying to post it… it won’t let me attach a video of my own but this is the exact same sound… Creaking noise when braking at low speeds - Maintenance/Repairs - Car Talk Community
Any ideas??

Have a shop look at it.

Yeah, that’s the plan for Friday, but a shop looked at it the first time and said it was the rear brakes so I was hoping someone else could recognize it and/or offer suggestions

drums and shoes are very particular. there are so many moving parts, everything can be shifted slightly. Did you notice uneven wear on the old shoes?

Brake pedal shaking (pulsing) generally points to the rear brakes. The steering wheel shaking generally means the front brakes.
So my question is this. Are you absolutely, positively, 100% certain this noise is from the rear?

Yeah I hear you, but I did get a brake inspection done last week and they only told me the rear brakes needed to be replaced. I’m 99% sure the noise is from the rear. My husband and I are going to try to troubleshoot a little more tonight to see if we can pinpoint exactly where its coming from.

In terms of what I said with the brake pedal or steering wheel, I can’t remember which one was the issue so that’s why I said ‘or’

Sounds more like a clunking to me not creaking. If it is a pulsation then likely the rear drums are out of round and need replacing.

Iam not familiar with your car, but I would go back and look at your work again and see if something looks wrong. always a good idea to take a picture of the brakes before doing the work if you have not done this a couple of times before. any grease on the shoe lining?
not sure if it would cause this sound but is there a chance you reversed the shoe linings? from pictures I have seen online they look almost the same. some vehicles have one larger than the other, but yours look mostly the same with a very slight difference. just a thought though 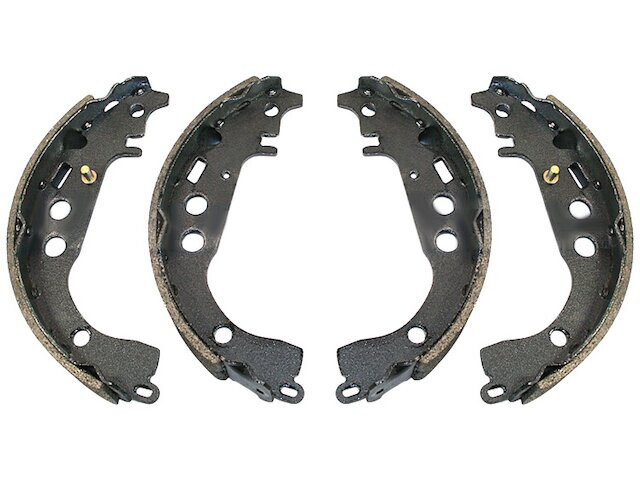 also, it is possible the new drums might be defective and slightly out of round.

The drums are brand new. We replaced the drums, shoes, and all springs

I will look into all of these, thank you!

My only confusion is that this was happening before I replaced the brakes and it’s still happening, making me thing it might be something we didn’t replace like the cylinders.

If this same sound was happening before you did the work and it is still happening, I would say it is something else causing the noise. as far as the wheel cylinder, if it is not leaking it would not cause the noise.

I was thinking a wheel bearing also. at least that’s what it sounds like in the video to me.

I have an early 90’s Corolla, 3 or 4 years ago heard a faint scraping noise from the rear when applying brakes. At first I thought it was just some rust forming on the drum b/c during rainy season, but later bit the bullet and removed the drums. Sure enough on one side the shoes were at the wear limit. I just replaced the shoes, nothing else, noise gone.

So your problem , replace most everything, noise still there, that is pretty mysterious. Here’s some guesses anyway, might be of help

Ok so hubby went under the car, checked the wheel bearings with a flashlight…didn’t SEE anything wrong but again, I’m bringing it to a mechanic on Friday so we’ll see

SO we just lifted the rear, hubby went under and didn’t physically see anything wrong.

We did determine the car needs to be going at least 20-25mph to make the noise and it ONLY makes it when its braking (both forward motion and backing up). He knows for sure it’s only coming from the rear and is 90% sure it’s coming from both sides.

Not a suspension issue, only time we can get the car to make the noise is by braking at at least 20-25mph.

We did not replace the wheel cylinder piston(s) so that very well could be it.

Thank you so much for your informative response, I really appreciate it and will update everyone when I (hopefully) figure it out on Friday!

We did not replace the wheel cylinder piston(s) so that very well could be it.

Should be at least be checked. Move rubber boot out of way, if see any brake fluid at all, replace wheel cylinder. When you press on brake pedal, that forces the pistons outward, which push on shoes. Shoes move and contact drum. For all that to work correctly, and without noise, the interface between the shoes and backing plate requires a special brake lube. That usually comes in a little packet with the replacement shoes. While checking wheel cylinder, make sure that brake lube has been applied.

The fact that the noise is only heard when braking doesn’t rule out a suspension system source. The necessary car motion may only occur when braking; i.e. not possible to reproduce when pushing on corners of stopped car.

You can’t really check a wheel bearing by looking at it though unless it is coming apart. I thought the noise was at low speed, but appears it is at higher speed. Gonna have to spin the wheel listening for roughness or checking for looseness.