… and they prefer it to the Jeep Wrangler: 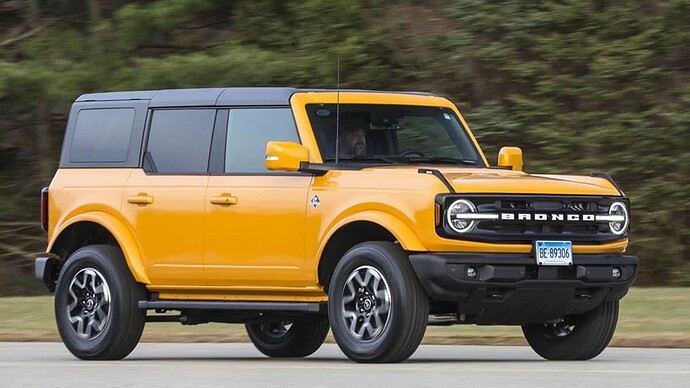 First Drive: The Ford Bronco Was Worth the Wait

In this first drive review of the 2021 Ford Bronco, Consumer Reports says the classic revival of a storied nameplate packs fun and capability into a handsome SUV.

Motorweek likes the new Bronco too.

No doubt people will like them but I just don’t see the “handsome SUV” styling. It looks an awful lot like a Land Rover.

You are correct Bing. It looks like a off road sport utility vehicle it is meant to be. Not a car based, grocery getter that is referred to as an SUV.

Take a look at the 2-door version.

I would not want a Bronco that looked like a soccer mom grocery getter SUV.
Granted many Bronco’s will be used for that purpose.
I’m sure Bing would not like the “handsome SUV” styling of my first SUV, an International Scout.

I heard those scouts would pretty much go anywhere though and hard to kill. Looks aren’t everything. Like the song if you want to be happy for the rest of your life, make an ugly woman your wife. . . Still I do like style.

Bing would not like the “handsome SUV” styling of my first SUV, an International Scout.

I had a friend in Colorado who drove a Scout as his daily. He just loved his Scout so much, part of nearly every conversation with him … lol … Not bad looking, but its designer thought utility was more important than appearance.

but I just don’t see the “handsome SUV” styling.

it just is not attractive

It’s subjective. Some people like the looks, some don’t. Ford spent a lot to produce the Bronco and I imagine their marketing group did a lot make sure the public would find it attractive enough to sell well. Not everyone has to like it.

Ford offers four “SUVs” in the already glut of copy cat SUVs on the market. Clearly Ford chose to not sully the Bronco name as they did with Mustang, branding another cookie cutter SUV as the Mustang Mach E.

Ford kept the Bronco more to the off road crowd but kept it still usable every day. They still used the name on a crossover (bronco sport) and bowing to the market offer a 4dr along with the 2dr Bronco. CR rates the Bronco higher than the Wrangler but still below the Honda Passport or Toyota Venza. Could have gone the way of the Chevy Blazer or Mitsubishi Eclipse

Arg, Ford did choose to make it confusing, though at first glance the Bronco Sport may share the same mechanical systems as the more traditionally styled Broncos. The Sport would definitely not be for me.
IMHO, the Sport should not share the Bronco name. They could have resurrected another name from the past, hmm, Pinto Sport?

CR rates the Bronco higher than the Wrangler but still below the Honda Passport or Toyota Venza. Could have gone the way of the Chevy Blazer or Mitsubishi Eclipse

Well, that’s CR’s take in it. They have their point of view, and I think most people here have different priorities than they do. I always refer to their reviews when I want to buy a car, but I keep their opinions in perspective.

All full-sized Broncos except the first gen ('66-'78) were based on the F series pickup, so they all had a pretty wide range of engine choices, like you listed.

I’m waiting for a white Bronco with the OJ Simpson trim package.

that is the one that comes with a driver, a gun and extra small gloves.

But only does 35 MPH on the Interstate.