Maybe it would help reduce thefts if residents weren’t demanding to defund the police but support the police doing their jobs apprehending these thieves. And then supporting prosecutors in punishing them. In Boulder and Denver especially.

We have had over 150 stolen cats so far this year, in a town of 13,000. Churches are hit the hardest. Small church busses have enough ground clearance that it does not need to be jacked up. Church lots are often empty and the with the Covid, the busses aren’t driven that much.

The one on our church bus was stolen for the second time. We have security cameras but it happened sometime in the last six weeks. The cameras ar on all the time instead of motion activated. It would take about 22 hours to review ll the footage.

BTW, they cut the wires to the rear O2 sensor then cut the pipes with a cordless sawzall so the O2 also has to be replaced. it’s about $2000 each time.

Not suprising, my church got rid of their 15pass Ford Van and decided to just rent or borrow when they really needed one. 1989 Ford Super Club Wagon with dual tanks and a/c but a basic am/fm radio. Before they started parking it in the upper not which is on a major street someone got both locking gas caps off and stole fuel. Far from the first time someone has stolen from the church but it’s still frustrating. We had members driving by the church even during lockdown to make sure nothing’s being damaged. Part of the building is rented to non profits so during the day there are staff and other’s around.

The Sad part is the church has had to go full Fort Knox and try to balance helping strangers with protecting their property.

Maybe it would help reduce thefts if residents weren’t demanding to defund the police but support the police doing their jobs apprehending these thieves.

Defunding the police has NOTHING to do with stopping the police from doing this type of job. It’s purpose is to move some of the money over to social services who are better equipped to handle certain kinds of calls that the police are not trained to handle properly such as homelessness, domestic abuse and substance abuse. There are several examples of cities that have done just that to some degree years ago. Some of the radical movement want to completely defund the police, but that was NEVER the intent of the movement, and still isn’t. The movement has been around for decades…it just recently been given a name. Redistributing funds for social services was what it was once called. It was a movement started in FL back in the 70’s to help with their homeless problem. And the police were all for it because they didn’t have a solution to the problem and were spending way too much time handing these cases when other crimes were being ignored.

Agree with that concept of redirecting funds. Police don’t want to handle domestic disputes any more than the public wants them to. Better to include a social worker. It may have started that way but the concept has clearly gone much farther. 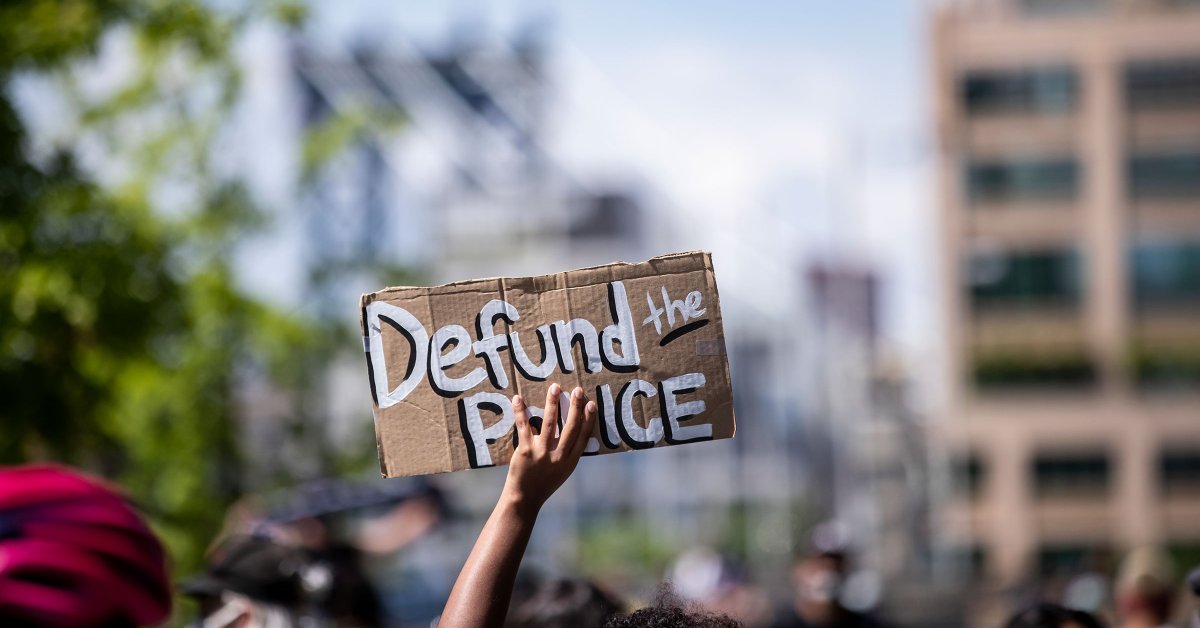 How Are Activists Managing Dissension Within the ‘Defund the Police’ Movement?

Not the 5th paragraph;

“Some activists use it to describe their goal of wholly disbanding police forces, others take its definition to mean the reallocation, to varying extents, of a police department’s budget. Others still believe the term can be used to describe both goals, or use it simply as a broader call for accountability.”

Taken in the context of my entire post, it refers to Colorado trying to reduce enforcement of these types of crimes, including auto theft. Note the article below where this was attempted twice, and failed, with a 3rd attempt on deck.

Fewer People Accused Of Low-Level Crimes Would Go To Jail — Or Stay In Jail —...

Criminal justice reformers are trying again with a policy to limit when police can arrest people for low-level crimes, as well as expand when people who have been arrested are eligible for release on no-cash bonds.

Colorado is trying to give “low level” criminals a pass. Eh, so they steal your catalytic convertor, they’ll just give them a ticket. But they won’t jail them even if convicted. Quite the deterrent, isn’t it?

It may have started that way but the concept has clearly gone much farther.

It is still that way. There may be a fringe movement that is vocal about defunding all police and starting fresh…but the original movement is going strong and does NOT want to defund police. Never has…Never will. I have several relatives and friends who are police in Central NY. They are all for it. One of my cousins is an active member of the local Defund police movement. He want’s many of these domestic calls to be handled by people who are trained to. His belief is to have a police presence as a backup if needed. There are many ways this can work. I know in some states/cities there needs to be a change for the benefit of everyone.

I think the place to stop converter theft is at the scrap yard.
Make it so that a random person cannot walk into a center with a converter and walk out with cash, no questions asked.

I agree, the solution is at the scrap yard.

People steal all sorts of things, copper pipes, aluminum light posts, wiring, gutters & downspouts, etc.to simply make a quick buck.
And nobody can tell me that the scrap yards don’t know that something’s up when some random guy in bringing in this stuff to sell on the cheap.

Require the scrapyard buyers to get a proper ID from the Sellers and a note where it came from and this foolishness will quickly stop.

St. Paul started the painting program to identify original owner’s cats so don’t think this is unique to CO. But yeah, police have been retiring and resigning as quick as they can get out of the system. A judge has now ordered Minneapolis to increase their hiring to meet the mandated level of staff but I have no idea how they are going to convince recruits to join the MPLS force snake pit as it is. There simply is not staff to cover all the calls and investigations. So ya gonna investigate a cat theft or a shooting-can’t do both. Like Oliver Hardy said “another fine mess you got me into”.

Footnote: St. Paul is also trying to paint the wiring for the street lights as an anti-theft program (Sarc).

Make it so that a random person cannot walk into a center with a converter and walk out with cash, no questions asked.

I agree I have not sold any scrap for at least ten years unless things changed since then my state required picture ID for anything over a certain amount and would pay by check using the name on your ID also at that time some of the more populated county’s had to get a permit from the sheriff’s dept to sell scrap.

Require the scrapyard buyers to get a proper ID from the Sellers and a note where it came from and this foolishness will quickly stop.

Nope. Several states have those laws and theft hasn’t even slowed down.

We had a situation here in NH and northern MA where people would steel all the copper pipes and wiring on new construction. Many builders have moved to Pex Piping. They’re also securing the building and adding security cameras during construction.

We had a situation here in NH and northern MA where people would steel all the copper pipes and wiring on new construction.

My son in law’s grandmother owns the family farm. The house, mansion really, was built in the 1700s and expanded around 1820. The original roof was copper sheeting, and as part of the historic designation, all replacements have to be like the original. The roofing contractor worked very quickly to remove the old roof and install the new one because of the huge investment in copper roofing. It’s easy to steal the roof panels on the ground.

The catalytic converter thieves don’t have to sell the converters to a scrap yard. They can sell directly to an unscrupulous auto repair shop. The shop can remove the paint if there and install it on another car. Thieves acne also disassemble the converter and sell the innards for reprocessing, or extract the rare earth metals themselves. They’d have to be a big operation to engage in that type of vertical integration, but it could happen.

I have to respectfully disagree.

Probably about 15 years ago Cat Converters joined the list of copper pipes from abandoned houses, which when it happened to their own car really ticked people off, and criminal penalties were added on the scrappers who were buying the stuff and a few of the slower to learn were trotted of for a short stay at our “delightful public accomodations” .
Seems like the prospect of spending even a short stay convinced the rest that the profit wasn’t worth it and the Cat problem is pretty much a thing of the past.

I’d like to say that crime suddenly vanished and criminals suddenly repented but my guess is that the knuckleheads probably figured out that it’s alot easier and more profitable to steal a $1,000 Apple phone.

Seems like the prospect of spending even a short stay convinced the rest that the profit wasn’t worth it and the Cat problem is pretty much a thing of the past.

Really? It’s not a thing of the past…in fact it’s growing.

True but if you “take the profit out of it” the problem will be greatly reduced.
If you can’t sell it, why steal it?

“State lawmakers may consider a bill that would put rules in place for scrap metal dealers. The proposed regulations would require a metal seller to prove they own the vehicle, the catalytic converter and show proof the seller purchased a converter to replace the one they’re selling. If it doesn’t pass this legislative session, Harris County is considering its own regulation, and the City of Houston is considering the creation of an ordinance.”

True but if you “take the profit out of it” the problem will be greatly reduced.
If you can’t sell it, why steal it?

Let me know when that happens. Right now it’s a proposal. Not law.

some states have different metal % requirements than others, so a legal replacement cat might be $900 in 45 states but $1,800 in the other five (federal cats vs. the california consortium).

I’ve been lucky (so far) in not having had any cats stolen by not filling my garage with excess crap and parking my car in it.