I just watched the Mythbusters “Green Hornet” edition in which they destroyed a mid-60’s Chrysler Imperial “Black Beauty.” They’ve destroyed a lot of worthless cars on Mythbusters, but I found this episode cringe-inducing and borderline criminal. Destroying a classic car like that…it hurt me to watch.

I think the second car they destroyed was a front-wheel drive Cadillac from the 80’s…for which they probably should be rewarded, not punished.

Your idea of “classic” may or may not correspond with others’ ideas.

It’s a TV show. They’ll do anything to increase their ratings.

I love the show but I admit they annoyed me when they destroyed the mint-condition ZR1 by putting a dead pig in it for a month during the summer.

But that didn’t annoy me as much as Monster Garage did when they tore up 2 DeLoreans to make a hovercraft.

I personally think it is more of a travesty that Warner Brothers destroyed somewhere around 285 Coke-bottle Chargers making the Dukes of Hazzard.

I remember a friends mother has a 1967-68 Chrysler 300 with a 440 and this was one woman that did not spare the horses. The car was that beautiful dark emerald green that Chrysler used. Another friend had a Plymouth GTX with the 440, the GTX seemed to have a better “version” of the 440. I had a 1970 Imperial with the 440, nice car.

Even worse, possibly, was the destruction of a couple dozen more of the Chargers for the filming of the 2005 disappointment “The Scumbags of Hazzard” starring Johnny Knoxville and Seann William Scott. I still have yet to be able to sit through that trash that even the original cast of the show wants nothing to do with. They may have destroyed 12 times more Chargers making the TV show, but at least it was watchable.

Crime in my opinion and I think it’s ridiculous to destroy a piece of history. Use an old retired Crown Vic cop car. Being a lifelong Mopar nut these things grate on me to no end.

That worthless show Overhaulin’ also ticked me off to where I quit watching it at all. They would take a complete, original, and rust-free vehicle and modify it to oblivion; as in the mid 60s Corvette and the Olds 442.
Not a problem with a rolling shell or a moth-eaten hulk but to butcher an original is sacrilege.

Yeah, being a Mopar fan, that one irked me, as did the rotting pig in the Vette, and the destruction of the 60s Impala that they put rockets on. And dropping the BMW 7-series from a helicopter was kind of a shame too, but at least that one was not a classic and probably pretty used up.

It also hurt me to watch that destruction.
I still have fond memories of (briefly) driving my uncle’s '64 Imperial LeBaron.
That car was magnificent beyond words.

I don’t like the idea of destroying perfectly good vehicles but the good news is that it’s raising the value of the vehicles that do survive.

On the plus side there’s the Pawn Stars '66 Imperial Crown convertible that the boys restored as a birthday present for the Old Man. What a sweet car.

Wasn’t that a FORD or Lincoln convertible that they fixed up? That resto buddy (of the Pawn Stars) that got his own show (for about 2 episodes) really did nice work. Myself I liked Coddingtons show, kinda stunned when he passed away, anyone know what happened to the Hot Rod shop? the custom wheel biz is probably still putting out product.

Here’s an article about the Pawn Stars '66 Crown Imperial: 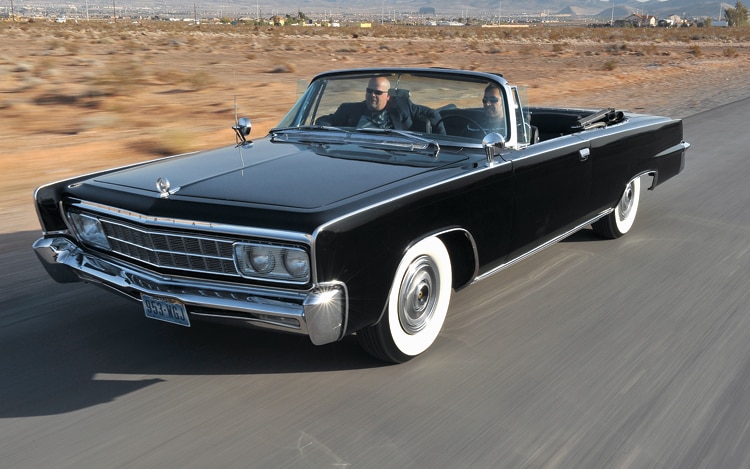 If you watch television, you might recognize this big, black convertible - and its owners - from the hit History channel show Pawn Stars. Read about the 1966 Imperial Crown Convertible from a featured article in our May 2010 issue, brought to you by...

They all look the same from those years anyway, not like the distinctive cars of today.

How do we know that these sacrificed cars weren’t in poor condition under the freshly painted skin?
Maybe some were restorations gone wrong with non-original parts?
Donor cars with only what was needed to roll through the scene?
Wrecks that got only the most superficial makeovers?

Those Hollywood techs can really make a sows ear look like a silk purse…for 10 seconds.

A lot times the cars are kit-built replicas, e.g. the Hemi-Cuda from Nash Bridges.

I would really doubt they’d destroy a collector-grade Imperial. I found two on Ebay that sold for something like $2500, paint it up, you’re ready to go for camera work. No need to use something fancy…and no great loss.

Do you know what other show is bad?? Canada"s worst driver. I watched a guy burn through a miata clutch on that show in like 5 minutes. This year they bought a new camaro…it got pretty demolished. They said that they stopped using classic cars because of all the complaints they received lol.

That being said, while its obviously worse to wreck a classic over some random car, I dont really get a kick out seeing any car wantonly trashed by god awful drivers.