… and other fans of The Forward Look. I would want the De Soto! 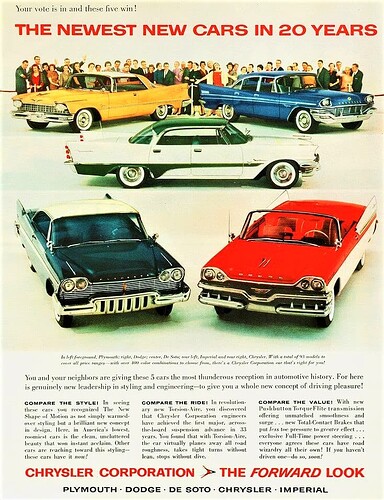 Early in the 30s into the 50s, the look was long hood short trunk. The focus was on the long engines… 6s longer than 4s, 8s longer than 6s… so the hoods were long.

The DeSotos those years have a cool look to them.

The DeSotos those years have a cool look to them.

My uncle had a '58 Firedome 4-door hardtop, and it was the first pillar-less 4 door in which I ever rode. Very spacious, nice ride, but the ultra-sensitive power steering was not ideal. My uncle demonstrated the power steering by tying a thread to the steering wheel and then steering the car with it while we were zooming along the NJ Turnpike. Thankfully, that needless show only lasted a couple of minutes before my aunt told him to put his hands back on the steering wheel.

I am partial to the 4 headlight cars, myself.

Not sure I’d worry so much about the build quality or even reliability of a 65 year old car. Just surviving is enough!

Floaty ride and over-boosted steering is pretty much the hallmark of 50s and 60s cars as is body pitch and roll!

I prefer Dodge’s take, best use of two tone color.

As far as headlights, I suspect 58 headlight buckets would be a bolt in swap for the 57s.

I would take any of them, but favorite DeSoto was the 1960.

The most beautiful line-up produced by any of the big three. It has not been surpassed to this day.

Specifically speaking of the Dodge&Plymouth, I am aware some 57s were available with quad lights where&when legal such as the Mercury Turnpike Cruiser.

And where not legal, it looked like 4 headlights, but they had a pair of smaller lights. What did they do?

Those were the parking lights and turn signals.
In 58 turn signals move to above the quad headlights. 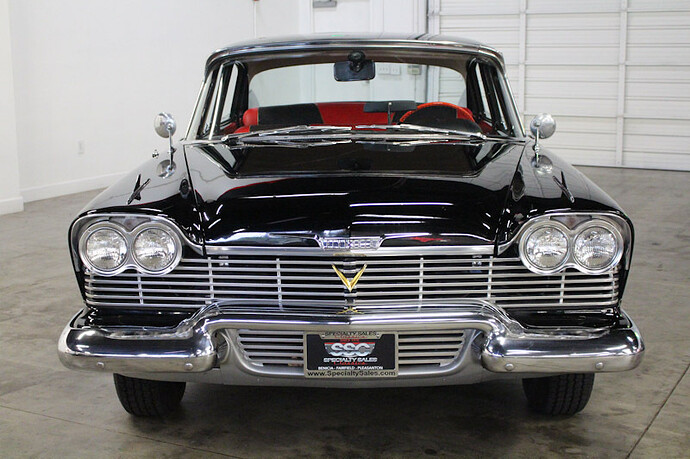 I prefer the 1960 Chrysler. By 1960, it became a little too obvious that De Sotos were just Chryslers with different grille and tail lights. I don’t recall, but perhaps someone else knows… Did the '60 De Soto have the same fantastically beautiful instrument panel that Chryslers had?

I got my driver’s license in 1957, the same year that these Chrysler models in the picture were introduced. As a tall teenager, I found the driving position and seating in these cars uncomfortable. I am probability the only person on this board that does not not care for the styling. I will admit that the torsion bar front suspension allowed the Chrysler products to not lean as much on sharp turns as cars from other manufacturers. I also didn’t like the dash mounted rear view mirrors on these 1957-1959 Chrysler products that I drove. I will concede that the TorqueFlyte® automatic transmission was the best of the automatic transmissions at the time.

+1
IMO, those mirrors were different for the sake of being different, but they were definitely not better. If you had anyone sitting in the middle of the front seat, that mirror displayed nothing but the middle passenger.

Still, there were many cars that had a long tail, like the business coupes produced from the 1930s into the 1950s, like the 1950 Studebaker Champion Deluxe shown below. I saw several business coupes on TV at the Mecum auction the last two weeks. Great car show, especially if you like muscle and pony cars. 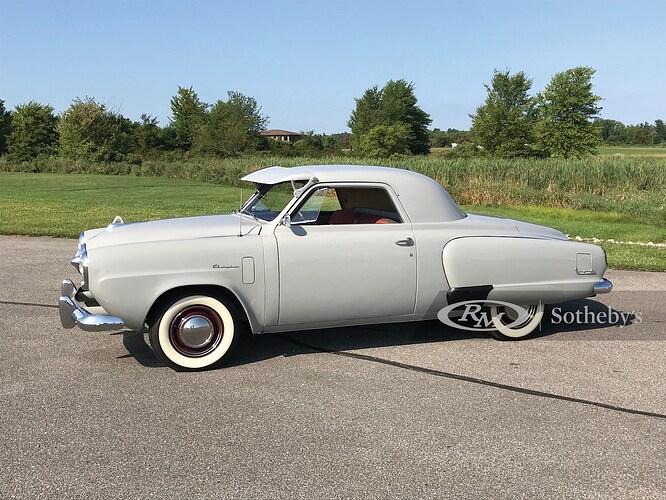 I don’t remember our 57 Dodge having the parking lights and turn signals seperate.

I think that depended on trim line. I saw a DeSoto dash (57?) that shared the Dodge dash.

My bil had that 57 desoto. Very nice car. Pretty sure it was a 57 with the single headlamp.

So we would have been 9 or 10 years old and the neighbor kids dad was a body man at the Plymouth dealer. Made a 57 Plymouth for the kid powered by a Maytag washing machine engine. Putt putt around the block he would go and never giving anyone a ride. Then 1958 came and changed the headlights to four and the license plate to 1958. Easy conversion. I know what happened to the kid but not the car.

The bottom of the line Desoto Firesweep was intoduced in 1957 to steal some sales from Dodge. It had the Dodge wheelbase, and a Dodge engine. Its intended target was the price conscious customer who wanted a more prestigious brand without having to pay for it. It did sell very well in 1957.

Thank you, that was my thinking, but did not know.