I have a 2003 Mitsubishi eclipsed 2003 2.4L.I just changed the transmission and clutch.when it’s off it goes into gear fine but when it’s on it won’t let me.the fork sometimes be vibrating.when I turn it on 1 or reverse gear it moves when I depressed the clutch pedal.The slave cylinder moves when I press the clutch pedal.what could it be?

It needs to come back apart. The clutch is not releasing when press the pedal. I’d try bleeding the clutch cylinder first to see if that fixes it. If not, you did something wrong or your new parts failed already or they were the wrong parts.

Yea that what I feared,well it my first time doing a clutch so a mistake was bound to happen.thanks!

If this was your first clutch replacement, you may have installed the clutch disc backwards.

That would be why you can shift thru the gears when the engine’s not running, but can’t when it is.

My first thought also; clutch disc in backwards. The part you see with the cushion springs faces the transmission.

For future repairs you might consider taking pictures of the components you disassemble as you take them apart. That way you have a reference of how they fit together. 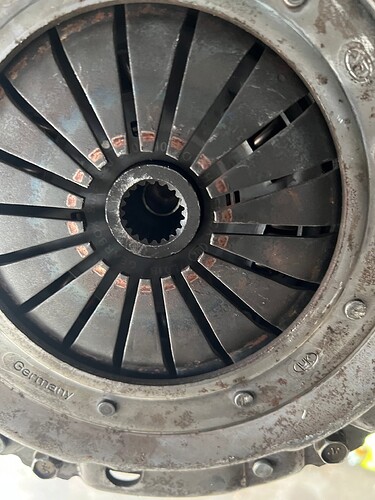 That’s not even centered.

Yea that’s what I imagined,there was not clutch alignment tool available but didn’t wanted to wait so I placed it with a stick and tape,well that’s a lesson learn to always wait.

If you got the transmission into place… it was centered well enough.

I see you reused the pressure plate. Check the plate for a cracked spring.

If the disc is in backwards then aligning it won’t matter as the cushion springs will touch the flywheel bolts which attach it to the crankshaft and prevent it from getting a bite on the flywheel and pressure plate.

Yea I did but now second time around I’m not taking any risks so I’m getting a new clutch kit. Thanks for the feedback

My first thought also; clutch disc in backwards. The part you see with the cushion springs faces the transmission.

I did that once.

I’ve redone a few clutch jobs after cars were towed in due to the disc being installed backwards. That doesn’t mean the person doing the work is stupid. Sometimes in stress situations or interruptions the mind wanders and everyone who works on cars has made some mistakes.
I’ve made some bonehead moves a couple of times…

Me as a back-yard-mechanic - I take my time because I want to be real careful not to screw anything up…Even on jobs I’ve done hundreds of times (like changing spark-plugs). Probably takes me 2-3 times longer than a professional mechanic for some jobs.

I only do my own automotive work if the time to do the job takes less time than to take the job to a shop. When I was a university professor, I invested my time in writing research articles for publication or writing grants. I also spent time playing horn in two concert bands and an orchestra. For me, it was worth paying a professional mechanic to do a job in an hour that would take me three hours to do. Before I was making a reasonably good salary and had to do my own maintenance and repairs, I longed for the days I wouldn’t have to do them. Now that I am retired, I find all kinds of excuses to get out of doing work. While I was typing this, I received a phone call asking me to play as a substitute in a concert and will be paid $65. That is more enjoyable for me than to save money by changing the oil in my vehicle. At age 81, I think I have earned the privilege to do what I want to do.
On the subject of clutch replacement, our neighbors bought a brand new Nash Ambassador back in 1952. The clutch didn’t work right and the diagnosis was that the clutch was installed upside down at the factory. I don’t know what that meant. If the disk had been installed backwards, I don’t think the car would move. Apparently, the symptoms were that sometimes the clutch wouldn’t release. The dealer did repair the problem under warranty. I still wonder about the exact explanation about the problem with our neighbor’s 1952 Nash.

As a broke college student I have no choice lol.

@Saucedoroberto44_182934 I was in the same situation you are in. I was in grad school and had a limited income. Even as a new faculty member at a university, my income wasn’t that great.
I will have to confess that last Saturday evening, I did a tuneup job --on a typewriter. The orchestra where I play performed Leroy Anderson’s “Typewriter”, a work written for typewriter and orchestra. The oboe sounded a tuning note and I struck a key in the typewriter. The players in the orchestra shook their heads and the concertmaster passed me a socket wrench with a spark plug hidden in the socket. I opened the lid on the typewriter and pretended to remove the spark plug. I took the plug out of the socket and used my gap.gauge to reset the gap. I then pretended to put the spark plug back in the typewriter. The oboe played a tuning note and I struck the “A” on the typewriter. The players in the orchestra nodded their heads that the typewriter was now in tune and we proceeded to play the piece
This may be the last “tune-up” job that I do.

As a broke college student I have no choice lol.

Think of it this way. By doing it yourself, you got to have more fun. As far as what’s wrong, besides the above comments, the symptom could be caused by a sticking bearing where the transmission input shaft meets up w/the center of the flywheel. Usually that bearing is replaced as part of a clutch job. Was it replaced?

Another possibility, clutch is not releasing as much as it should b/c of problem between clutch pedal and clutch, for example problematic clutch linkage or hydraulics. What was your motivation to replace the clutch and transmission in the first place? Could provide a clue.

BTW, it’s not possible to tell if the clutch parts are properly centered or not from the photo in post 7. Depends on camera angle.