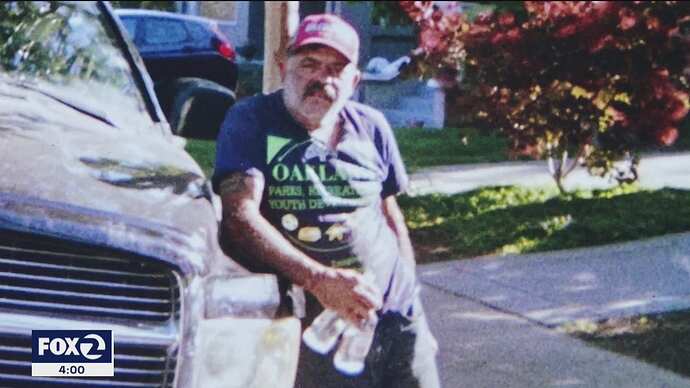 A man was shot and killed early Tuesday while confronting catalytic-converter thieves outside his home in Oakland's Glenview neighborhood.

That story would have had a different ending in other states. Texas or Florida for example.

Calif politicos recently passed a law making it difficult to sell a stolen cat. Wondering if that law somehow motivated the thieves to escalate a cat-theft to a fatal shooting? Law of unintended consequences ?

That story would have had a different ending in other states. Texas or Florida for example

You can include Georgia in that.

thieves to escalate a cat-theft to a fatal shooting? Law of unintended consequences

Why would that make stealing one more violent? Makes it harder to sell, not harder to steal. Releasing caught criminals wwith a pat on the rear and a promise to “be good and show up for court” shows them there are no consequences for their actions.

Minnesota is a shall issue state too thanks to the effort of one of my former den mothers. Most people don’t feel the need though.

Minnesota is a shall issue state

I occasionally still make a presence known, if I think i will not be a life threatening situation, If I saw that I might call a cop! Now I might give a visit or holler, or just stand there and watch, and it is a judgement situation.

A shall issue state allows you to exercise your 2nd amenment rights without asking permission from the state or local government.

George you need to get out more. Shall issue means that you apply to the local sheriff and unless there is a criminal or mental issue, they are compelled to issue a concealed carry permit but a safety and legal course by nra or qualified instructor needs to be completed.

Before the law change, it was up to the local sheriff to issue or not at their own discretion and they had a million reasons why they didn’t.
I don’t know what the requirements are if non concealed but the training would be advisable anyway.

Now South Dakota has no permit requirements. Don’t know about training but there should be some proficiency training. There really needs to be a federal reciprocity law though for going from one state to another, like a drivers license. Imho, not to start a fight.

My state is a “may issue” state, and im happy it stays that way.

Sounds like a good reason to shoot anyone stealing a catalyst. It’s just self-defense, right? I mean now that catalyst thieves are known to shoot someone who tries to stop them.

Sounds like a good reason to shoot anyone stealing a catalyst

I’m sure the shooters are well known to police and also pretty sure if caught the DA and the court system will slap them on the wrist and release them for the 99th time to repeat the same crimes.

Open up Alcatraz again sans any modern luxuries and remodeling. Pack them off there and issue each inmate their own shank upon arrival.

I personally like the Escape from New York model. Pick an island, like Manhattan, seal the bridges and drop the felons in to fend for themselves. (a bit tongue in cheeks but bear with me…)

We’ve already played this game before and did not like the results. Lots of older folks on this forum that should remember the violence from the 60s, 70s and 80s. Rates of violent crime and theft similar to the surge we see today. Judges and prosecutors who felt sorrier for the poor underprivileged criminal than the victims so they release them to roam the streets. Sound familiar? It should.

We The People got fed up and toughened our response. The current president even voted for the 3 strikes Crime Bill… and crime went down. Do the crime, so do the time. So we know what the solution is. We’d better get back to it.

Three Strikes did and does not work though. Countless crimes are committed every day by people who have far more than 3 strikes. Besides, if you remember the TS bill passed during the Clinton Administration only applied to Federal crimes. Unless it’s interstate or involving a Federal facility/Federal employees it won’t count.

Not many years ago in OK some thug was shot and killed by a homeowner who caught him stealing his truck in broad daylight. Thug tried to run him down with his own truck. A quick search of the thug’s criminal history showed 53 felony convictions in the past 15 years; and that is just what he was caught and convicted of. Drugs, car theft, 3 assaults and batteries on cops with 2 of those involving deadly weapons, armed robbery, burglary, assaults on 3 women who had protection orders out on him, firearms after a felony, you name it. He was the poster child for why TS is pointless and crime rates were on a downhill slide several years before TS was passed.

Money was provided to various PDs around the country to hire extra law enforcement officers. A number of PDs in OK received those funds but what happened is that after a couple of years those funds ran out. What happened? The officers hired with those funds were then fired as the PDs/Cities could not afford to keep them.

The spending on prisons only led to the creation of private prisons and padding the pockets of those running them. The prison population here in OK increased dramatically due to this and the state was actively importing inmates from Hawaii, New Mexico, Minnesota, and other states.
There have also been inmates and corrections officers murdered, many escapes, and more riots than I can remember; and the DOC is constantly whining about being overcrowded and understaffed. Paying a private company by the head is just exacerbating the problem.

In the small city where I went skydriving recently a riot there led to 3 deaths and 5 serious injuries. Charges were filed against 7 inmates. Two years later; all charges dismissed.
One inmate from MN was released while here and this happened 20 miles from me. What was the first thing he did? Kidnapped, raped, beat, and stabbed to death a 6 year old girl. He skated on a technicality…

Crimes not good, but it has dropped a lot, the opposite of what some folks think is happening: 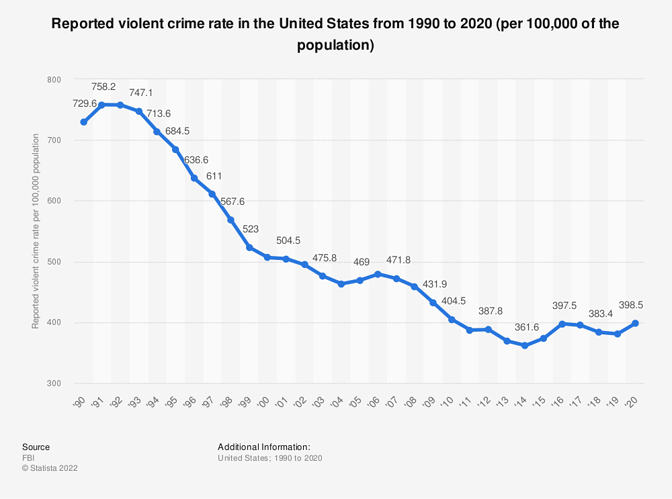 Yes. But if I looked out my window and saw my neighbor shooting at someone who was stealing his catalyst, I wouldn’t say anything. Mostly not to disturb his aim.

In Oakland California, you have a 1 in 77 chance of being a violent crime victim. 4.7 times the national average.

Most accurate 2021 crime rates for Oakland, CA. Your chance of being a victim of violent crime in Oakland is 1 in 77 and property crime is 1 in 19. Compare Oakland crime data to other cities, states, and neighborhoods in the U.S. on...

I’m all for prosecuting folks who purposely commit crimes, and throwing away the key if the offense is plain evil and outrageous. But to get my support for that idea the legal system & politicians will have to do it uniformly for all offenders of the law. Not just some of them.