A recall for almost every Rivian vehicle

This recall is for a fastener connecting the front upper control arm and the steering knuckle. If there’s a problem with the connection, Rivian vehicles could lose steering control. This is the 3rd recall for Rivian, and potentially the most serious one. 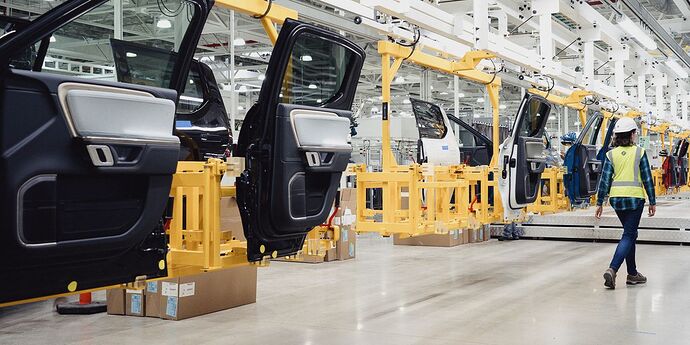 Rivian Is Recalling Nearly All Vehicles It Has Produced

On Friday, Rivian sent its customers a recall notice for an issue that can affect a vehicle's steering.

Same thing happened to Saturn when they first came out.

It happens… especially with, but not exclusive to, start-ups. Toyota had to recall all of their new EVs, GM had to recall every Bolt EV.

Seems to be an easy fix… Likely someone noticed an electric torque wrench had bad calibration so the next question was… For how long?

At least they are doing the right thing on their own without regulators forcing it.

It happens… especially with, but not exclusive to, start-ups.

+1
A “clean-sheet” design will always be more prone to problems with design and/or production quality.

A “clean-sheet” design will always be more prone to problems with design and/or production quality.

That was exactly what the Saturn was. Virtually nothing done “GM-like” on that car. My Saturn had 2 or 3 recalls when I owned it. All were quick and easy and done while I was sitting in their waiting room having a coffee and a snack. I can’t say the same for other recalls on other cars.

The real key to any recall is the response. If it is not a pain in the neck, the customer is greeted in a friendly way and treated with respect, the company quickly recovers. And so does the stock price!

The real key to any recall is the response

But, sadly, the percentage of car owners who actually react to a recall by bringing the vehicle in for the “fix” is not very good. According to one source, only 61% of recalled vehicles actually wind-up being repaired:

Not surprising the low take of recall notices given the abject fear I sense from posters here that don’t even consider taking a 2 year old malfunctioning vehicle back to the dealer for warranty work.

Plus the increasing number of folks too timid to call anyone on the phone! If it can’t be handled online, they won’t!

When I mentioned this reality several years ago, and wondered why people wouldn’t avail themselves of free repairs that could improve their vehicle’s performance/reliability or enhance its safety, one member of the forum stated that he wouldn’t go back to a dealership for anything–including recall repairs–because they would try to “upsell” him.

My reaction was that he could take the Nancy Reagan approach and “just say no”, but he never responded to that suggestion.

only 61% of recalled vehicles actually wind-up being repaired

Chevy recalled the key on my 2011 Camaro. They would take it apart and separate it into a key and separate fob. I have simply ignored the recall notices for many years. There is no way what they postulated could happen with me driving. And with a Camaro it never has.

At least they are doing the right thing on their own without regulators forcing it.

That’s because of more recent fines levied by DoT like the one Toyota paid a few years ago. None of the automakers want to be accused of slow walking an investigation and get a huge fine.

only 61% of recalled vehicles actually wind-up being repaired:

Reminds me of a Jay Leno joke.

Audi was having very low repair numbers for brake recall. Jay quipped that was because nobody could stop in time for the dealerships!

Thanks for the info. I have my riv Ian parked until it can be towed. Everybody else here that has a riv Ian raise your hand.

I have my riv Ian parked

Is your Ipad helping you again ?

I hope you saved the receipt, if you need to return it!

I hope you saved the receipt, if you need to return it!

Using my skills, I deducted that the intended word is “Rivian”. My reply was in response to the Rivian purchase and was strictly in humor.
Not every grammar error or typo needs to be criticized.

Dang looks like someone stole the thing while I was on the computer. Easy come easy go.

I guessed that @bing was making a joke about his series of Rivieras and tying them to the Rivian.

someone noticed an electric torque wrench had bad calibration

In the tech industry we’d send our the tools we used to develop the products and test them (o’scopes, dvms, signal generators, etc) to a local business every so often, every 3 months or so. That business did nothing else besides making sure those instruments worked correctly in every setting and were properly calibrated. Wouldn’t a car manufacturer do the same thing with any of their tools that might get out of calibration, like a torque wrench?