I drove car to store when I came back car wouldn’t start. Just clicks got jumped and took to Advanced Auto. Said I needed battery. Got new battery, still won’t start. They then said starter, but it started when they jumped me. I cannot get it to start at home with a small battery charger, so I am stuck. Any ideas??

The counter people at auto parts stores are NOT mechanics, they are salespeople. You starter is fine, as you found out. I suspect the battery cables have come loose or are corroded. Specifically the negative cable. Not at the battery, the other end. If you don’t own a volt-ohm meter and know how to use it, jump the car and take it to a well rated independent auto repair shop.

The man who replaced my battery cleaned everything off. The negative cable was a problem for him, but he replaced a stripped nut. Maybe still not tight enough. I do own a Volt-Ohm meter, but do not know how to use it. 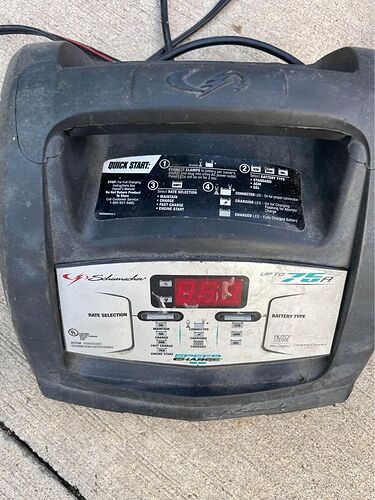 The man who replaced my battery cleaned everything off.

Sure, at the battery posts but no further… because

The counter people at auto parts stores are NOT mechanics, they are salespeople.

take it to a well rated independent auto repair shop.

There should be an investigation on Dateline NBC or such about places that always tell you that you need a new battery regardless of the condition of the one being tested.

If you don’t know how to use a multimeter, you need to get the car to a repair shop. This is probably an easy problem to diagnose, but your basic knowledge is not up to the task. If you want to beef that up, go to YouTube and start learning. Note also: your problem is probably a very general problem, and not an “Equinox” problem.

True but mine was original to the car so I figured I was due. But when it wouldn’t start and they had to jump me, I was a little irritated.

I just watched how to use it and mine reads 12.5 a little under what the man in the video was.

Was the car running? Or off? I assume off. If it was running it should read about 14 volts. Read this with the red on the battery + and the black on bare metal on the engine itself. Now turn the enbine off and take the red off the battery and put it on the metal on the other end of the red battery cable. Does if read 12.5 volts? If it does your battery + cable is OK.

Now the ohms, or resistance. Red probe on the battery -, black on that bare bit of metal on the engine. It should be very close to zero. If it reads high or no rezding at all, your battery ground cable is bad.

I’m presuming this is a “no crank” problem; i.e you don’t hear the normal rrr rrr rrrr sound w/key in start. If so, I’m guessing auto parts store staff (while not mechanics) are correct, your car needs replacement starter motor. The fact that it cranked ok when jumped doesn’t necessarily imply starter motor is good. Ask your shop to first do a battery/charging system test. If ok, next ask them to measure the voltage at the start motor’s “s” terminal when key in “start”. Probe terminal to starter case. If over 10.5 volts and doesn’t crank, starter motor very likely faulty. (Caution: Don’t attempt this experiment yourself unless you are qualified.)

If decision to replace starter motor, suggest to avoid aftermarket part. Instead oem, either oem branded part from parts store, or buy from dealership. More expensive, but better chance it will work right off the bat, and stay working. Don’t defer, faulty starter motors rarely improve on their own, and symptom will almost surely get worse, and leave you stranded.

The fact that it cranked ok when jumped doesn’t necessarily imply starter motor is good.

Could you explain that statement?
With a jump the starter is now getting current and cranks. Cranking indicates starter works. All indicators to me point to current not getting from the battery terminals to the starter. Probably a bad connection at the battery and battery cables or the other end of the cables or a bad cable.

When jumped there’s two batteries in parallel feeding starter motor, so voltage at starter motor higher. Starter motor will crank only if voltage meets a certain minimum voltage. Jumping could put it over the limit. Also some jump equipment uses higher than the normal 12.6 volt battery voltage.

Yes, that makes sense but amperage would be the proper term. I agree with this possibility, but I think the most likely cause in this case would be insufficient current getting from the battery to starter. And as others have said, if OP can not measure the integrity of the terminals and cables, a mechanic can fly right through this.

amperage would be the proper term

You are correct that current in the starter’s coils is what creates the magnetic force that makes the motor spin and crank the engine; but Current = Voltage/Resistance, so if R is constant (which it more or less is) , then the winding’s current is directly proportional to the voltage at the starter motor terminal. It’s a little more complicated than that b/c there’s two terminals, the “s” and “b”, which reach the starter motor along slightly different paths.

I took all of your advice and got it going. I took terminal off and cleaned really well I think that is what did it. The negative terminal is awful. I tested battery when not cranked and it measured 12.5 I then turned it on and it measured over 14. So I am guessing I am good for now. Thanks for all your help and advice. Glad I learned to do this myself.

Two 12v batteries in parallel would still have 12v.
Two 12v. batteries in series would have 24v. And burn up a lot of things in a car.

Two 12v batteries in parallel would still have 12v.

True, if batteries were ideal voltage sources. But they aren’t. Each battery has some internal resistance, and two resistors in parallel have less resistance.

Here’s a little puzzler: If you invented a battery had no internal resistance, you’d be the wealthiest person in the world. Why?

That’s a little low if the car had been driven at least 5 miles the day prior. . 12.6 v is normal before first start of the day. You wouldn’t think 0.1 volts would make any difference, but it indicates the battery isn’t fully charged or is starting to fail.

Yeah everything I watched online said that so I’m going to contact advanced Auto because it’s a brand new battery.