I have a 2010 Chevy equinox with 136k miles. Recently it’s having trouble starting. The other day it wouldn’t start. Jump started and it worked. There was like corrosion crap at the connections so I cleaned them up and my battery hasn’t died since (1 week now).Now when I start the car it sounds like it doesn’t want to start but it will. I took it to a auto shop and they said the alternator is reading it’s over charging and the battery is dead and didn’t think the car would start but it does. But they weren’t sure if it was just a dead battery or alternator. When the car starts the air doesn’t turn on right away, I have it off when I start the car and when I turn it up nothing but does come on in about 20 seconds.Then today when I started it it said power steering system something but went away real fast. Does anyone know what this sounds like. I’m hoping just a dead battery and not an alternator but I don’t want to spend money on something that isn’t the problem! I appreciate your knowledge in this! Thanks!

Take your car to a chain auto parts store. They will test the battery for you. If it needs replacement they will tell you so. That’s what I do. Call ahead first to make sure that the battery tester is available.

But they weren’t sure if it was just a dead battery or alternator.

That statement just means they either don’t know or don’t want to work on your vehicle . Any decent shop should be able to solve this but stay away from franchise places .

Look on the negative battery cable and see if you see this.

This is the battery current sensor.

This measures the current and voltage to and from the battery and sends this signal to the Body Control Module.

The BCM then controls the voltage/current from the alternator to the battery.

This usually means this sensor has failed and the BCM is commanding the alternator to go to max output because it thinks the battery is dead .

Bring the vehicle to a shop that can scam for B0 codes to determine if this is what’s happened.

You’ll fry your alternator if this continues.

Went to another place where they ran all the test and said it’s only a dead battery. So far the new battery is running great

A good battery is a necessity with all of the electronics in todays vehicle and can cause all sorts of flakey issues .

It wasn’t until I read all the posts that I figured out we were not talking about barley, wheat or oats. Clearly, this battery did not have its oats.

As mentioned, a battery does way more than start your car these days. I had one that was starting the car just fine but I could see it leaking acid so I replaced it. It was also 7 years old so had lived a good life. The car run so much smoother with a new battery. Remember that all the sensors are calibrated with a certain voltage in mind. If they aren’t getting that amount, they won’t operate properly and might send the computer bad data. The car is getting better mileage and seems a tad more powerful as well.

Hopefully the shop that did the battery/charging system test gave you the proper diagnosis. Most shops have a special-purpose machine that only does that test, it’s such a common problem. Usually a problem like this would be caused by a worn out battery, alternator would remain ok. If you run into this problem again, what I do is this simple voltage measure as the first step. Before first start of the day, car sitting unused overnight, battery should measure about 12.6 volts. Then immediately after starting engine, 13.5 - 15.5 volts.

Suggest to avoid jump starts except in emergencies, as this can damage the electricals in car providing the jump as well as your car. Damaged alternator diodes for example. I just re-charge the battery overnight with a battery charger instead.

not talking about barley,

At first glance I thought this was about beer. I’m in … lol …

I think there was a post here about using brewing or distilling waste to make fuel a while back!

OAK-AY, all puns are now welcome.

Clearly, this battery did not have its oats.

Wheat a rye sense of humor you have! 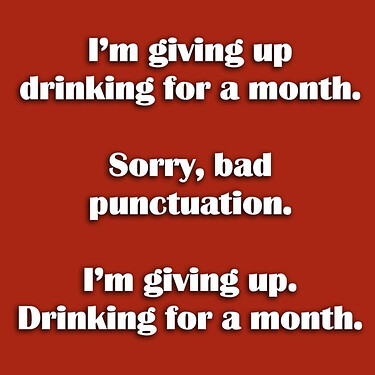 I always carry a jump box for that reason, I never want to tell a person I will not jump their car. Even though I still carry 14 foot cables # 1 or 2 I think, just in case.

I never want to tell a person I will not jump their car.

I don’t have a problem telling someone that I will not jump their vehicle . Most of the towing companies in this area only charge 25.00 to come and jump a vehicle.

did you miss a decimal place??