I purchased a 2008 Ford Escape Hybrid which now has 109K miles on it. It’s been a great vehicle all around. Two recent incidents where the yellow ABS and red brake lights came on, with messages of Check Brake System and Regen Brakes Disabled. I was able to let the vehicle sit and retry and the lights didn’t come on. Brought in for service at dealership and they found codes C1478 and C1480. They’re quoting me $5,300 to replace the Hydraulic Control Unit. Also, when picking it up, now the Check Brake System light is on all the time and the vehicle basically has no brakes. I’ve left it at the dealership because it isn’t safe to drive.

Dealership is offering to take 10% off the service. Ford (corporate) customer service says there’s no program for my vehicle and no recall, so there’s nothing they can do.

Looking online, there are others that have experienced this problem: 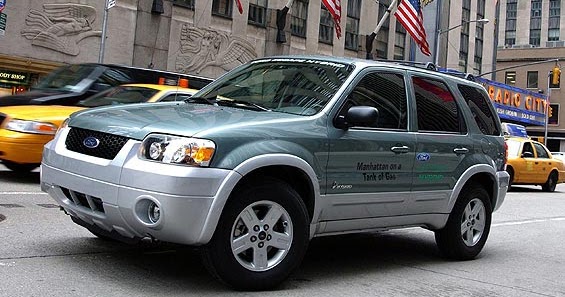 In previous blog posts ( Here and Here ), we discussed the brake failure experience with our 2005 Ford Escape Hybrid ("FEH"). In our ea...

There are 23 (now 24) identical complaints THIS YEAR ALONE at NHTSA’s ODI webpage (safercar.gov)

I asked about bleeding the brakes (“wouldn’t help, the HCU has failed”) or getting a used HCU (“can’t, programmed with the VIN, reprogramming doesn’t work”). With the vehicle’s KBB trade-in value is $5,500, it’s hard for me to figure out what to do next. Ford and the dealer are unable to help and I have a great car that has been rendered inoperable / worthless by a single part.

WOWSERS is all I can say. That sucks to the nth degree. Part of the reason I went to a 3 year lease on the wifes new car, no nothing to worry about as the warranty covers the lease period. still got my 03 with 170k, so I guess I cannot fault buy vs lease.

No suggestions, but sympathy, and apppreciation for the post.

The most troubling thing is that the brakes don’t work. Why wouldn’t they revert to standard brakes like other cars?

Apparently you’re not the only Escape Hybrid owner getting stuck by Ford with their $5000 replacement HCU’s. For that kind of cash I’d seriously consider selling the thing for parts and buying a different vehicle.

Because what good is spending $5k on a part that has an apparent design or manufacturing defect and could fail again? Ford should be ashamed.

24 known complaints? Total lack of brakes?
A full investigation should be initiated and if this turns out as serious as indicated Ford should be forced to issue a recall.

This is the price to be paid for modern technology and all of the gee whiz features desired by customers and/or mandated by the Feds.

Things like this are not proprietary to Ford either.

I’m afraid I have no good answer for you and unfortunately, this type of thing is only going to get worse in the future. If you can actually get 5500 out of it as a trade it may be a good idea to unload it.

Unfortunately your dealer knows your Escape has a problem, so they are not likely to give you $5500 for it. Reporting it to the NHTSA was your only good move. I should think that might get some action. Unfortunately the situation will probably have to kill someone, if not several people, before Ford will take action. When the cost of the lawsuits approaches the cost of the recall, things will happen.

Most of the folks here advise against paying for an extended warranty but its maybe something to consider as protection against major repair costs like this. I’ve never done it and don’t know what the year and mileage limits are but something to think about as cars get more complex-especially hybrids.

At this point what do ya do? If you could get anything for it on a trade, you’d be better off than fixing it only to have the same problem redevelop again.

You actually have brakes, just not power assisted brakes.

I read the original post 3 times to try to understand where the OP stands. I think it means they have NOT fixed the car because the cost is so high, not that the dealer installed a new HCU it and it is still broken.

The car is in manual mode because the HCU failed. This unit is full-on brake by wire. If commands the hydraulic pressure based on the brake pedal pressure and the amount of regen braking available. Regen is greatest when the batteries are depleted and least when they are fully charged. The HCU adjusts how much hydraulic braking is applied so your foot-signal-to-brake rate are consistent. It is similar to ABS that works with every brake apply. It is an expensive bit of technology that wore out.

So your car is broken and takes as much as it is worth to fix it. This is no different than a blown engine costing as much as the car. You either pay the bill and fix it or scrap (or donate) the car. Sorry about your loss.

When the public is enamoured with high tech bells and whistles that are integrated into the basic operating systems of their automobiles they find the built in obsolescence hastens their ride’s disposal date. I found it preferable to retrofit non-ABS hardware when faced with outrageously expensive, failure prone HCUs many years ago. Today, however, ABS seems to be a federally mandated system and so there is no fall back for frustrated owners of failure prone vehicles and the manufacturers can throw up their hands and blame Washington for the problems.

If ABS were again an option costing upwards of $1,000 how many cars would be sold with and without the option? Mandating “sky hooks” is the epitome of “nanny state” politics.

@“Rod Knox” - Why not get rid of airbags and seatbelts too? Let’s make crumple zone’s an expensive option. It would sure make cars cheaper if you could buy them without safety or emissions control features! The problem is that people die. A lot of them. And safety features get cheaper when all cars have them.

Cars today are a marvel of engineering. The tradeoff is that sometimes the fancy bits malfunction and cost money to fix. I love the safety features of my vehicles. My only cautionary note is that I would not recommend buying “young” technology. Early adopters of hybrids and other new technology are the trailblazers for problems such as the one the OP is posting about. I bought a reliable car (Mazda 6) with a conventional gasoline engine to avoid the expensive failures of hybrids. The OP bought a Ford Escape Hybrid, a car with mediocre reliability and fancy drive system using an immature technology. So he saved a few hundred bucks in gas and now he is stuck with an expensive repair. Welcome to the new age of vehicle ownership.

NASCAR doesn’t require airbags. How’s that working for them?

Seriously, the luddite thing is a bit over the top. Cars are safer now. That’s a good thing. Technology costs money to fix. That’s not an evil thing. I’m paying a lot more today to upgrade my computer than I was in the 70’s because I didn’t have a computer in the 70’s. But I also didn’t get to hang out on cartalk.com and talk to people from all over the country, and sometimes world, about cars. There are good and bad consequences to everything, and acting like having to spend money on something automatically makes the thing bad is short sighted.

The only thing that really gets my goat here is the bit about “the module is VIN specific and can’t be reprogrammed.” If that’s true and his dealership isn’t just BSing him to trick him into giving them too much money, then I think there should be sanctions against Ford for that. They’re effectively guaranteeing future profits by bricking perfectly good used parts on purpose and for no legitimate reason. That’s absurd.

Everyone needs to learn that as cars get more complicated and expensive to fix, their value will collapse to near zero as they pass the 10 year, 100,000 mile mark…Any major component failure at this point will almost certainly total the car…Salvage yards are full of decent looking cars that have problems that can not be economically repaired… Once cars pass the 10 year mark, dealership parts get difficult or impossible to find. Salvage yard parts once filled this void but today, with integrated computer controls monitoring everything, salvage yard parts are likely to be rejected because of VIN incompatibility…

The automotive consumers only defense is to stick with simple cars, the most basic models that are least likely to suffer devastating repair costs like those the OP is facing…The regenerative braking systems used on hybrids is so complex any failures here means staggering repair bills…

The federal mandate for ABS brakes was the result of lobbying by the developers/producers of the technology.

The federal mandate for ABS brakes was the result of lobbying by the developers/producers of the technology.

Everyone needs to learn that as cars get more complicated and expensive to fix, their value will collapse to near zero as they pass the 10 year, 100,000 mile mark

But they’re NOT. My 4runner and wifes Lexus are far far far more complex then any vehicle we’ve owned…and far far far far more reliable. Yes…when thing do break…they tend to be expensive…but since they don’t break that often…the overall repair cost is down…NOT UP.

Here’s good example…Electronic ignition systems are far more complicated then the old point/condenser systems. When they break…they cost 4-5 times more then the old system…however…when was the last time you’ve ever had to replace one? We’ve never had to…and several of our vehicles went well past 400k miles…But with the point/condenser ignition system…you’re changing plugs more often because of the decrease gap…and you have to replace the points and condenser every 30k-40k miles. Having a mechanic do that several times…and you’d be paying THOUSANDS over the live of the vehicle if you keep it to 300k miles (which we do).

This Ford Escape system is NOT specifically for ABS although it provides that feature. It is an electro-hydraulic supply unit that provides braking-by-wire. It wasn’t mandated by the feds, it was installed to give consistent braking for the hybrid.

“The only thing that really gets my goat here is the bit about “the module is VIN specific and can’t be reprogrammed.” If that’s true and his dealership isn’t just BSing him to trick him into giving them too much money, then I think there should be sanctions against Ford for that. They’re effectively guaranteeing future profits by bricking perfectly good used parts on purpose and for no legitimate reason. That’s absurd.

I couldn’t believe that either when I read the OP’s post, but after some Googling I’ve read other similar complaints where the owners say Ford has told them the HCU can be flashed only once with the VIN, so apparently it’s true. And ridiculous.

Other manufactures also do not allow technicians to rewrite VINs in control modules with the scan tool. The remanufacture facilities have the ability to clear the VIN from the modules memory.

I have replaced about twenty very expensive brake actuators. They are used in non hybrid luxury cars for ABS/stability control. Prices run from $1800 to $4,000.