Dear Ray, In your 3-18-18 column you said that the replacement of a timing belt was relatively inexpensive and could be replaced in an hour or so. Last November, at 150,000 miles (I know – risky) for a cost of near $1,000 I had the belt replaced. Earlier, another mechanic had quoted me a similar price to do the work. Is there something special about the Highland 6-cylinder, all-wheel drive engine? I am hoping to keep the Highlander for another hundred thousand miles. Thank you. (We moved in the 2014/15 period and I did not realize that Tom had passed away. Nowadays, I read your column in the paper, but In the old days I really enjoyed you and your brother’s repartee on the radio show. I’m sorry for your lost of a great brother.)

Ray doesn’t answer here. Forum members do. Not sure what car Ray was actually referencing but a V6 would be quite a bit more involved to replace the timing belt on. You called around so you know that’s the cost in your area and made a wise decision to get the job done.

And you were playing with some serious fire here. Your belt is 13 years old with 150K. Waaay longer than Toyota or any belt manufacturer recommends. You have the only Toyota V6 engine that is actually an interference engine. Meaning if you break the timing belt, you will bend all the valves.

Go buy a lottery ticket before your luck wears off!

I paid 1100 to have the timing belt, water pump, and tensioner replaced on my 2006 Sienna. It has the same V6 as your Highlander. For the amount of work required it was a reasonable price.

I’m seeing $60 for the belt, plus 3.6 hours labor, just to replace the belt only. It’s a 41 step quite technical procedure. If it is not done correctly, major engine damage can result. Generally most shops would also recommend replace the tensioner pulley, front crank seal, and the idler pulley. They might also replace the crank gear that drives the belt. And it’s quite possible they’d suggest to replace the water pump and front cam seals at the same time. So that would add in more steps, hours, and parts cost. I can easily see it getting into the $1000 category. But if you were satisfied w/just replacing the timing belt only, and be willing to accept the extra-cost consequences later should one of those other parts fail, you should be able to get that done for something on the order of $500. Exactly how much depends on what the auto-repair labor rate is in your area, whether you are having it done at a dealership (more expensive) or inde shop , etc.

And I’ve changed the timing belt myself a few years ago, along with the water pump, cam seals, crank seal, tensioner and idler. All the stuff George mentioned. You do NOT want to neglect anything and have to do it all over again a year later.

It’s not a 5 minute job. Not if you want to be absolutely sure you’ve got everything correct, before buttoning it up

I’m not familiar with this vehicle, but when I replaced the timing belt (and water pump and tensioner) on my old Acura MDX, the cost was in the same ballpark, so your cost might very well be reasonable.

duh, you forgot to release the pinto belt tensioner.
yes i did job in a sears parking lot with a screwdriver and pliers.

No problem, wrench flew of the tensioner when I started the engine…

I own the same generation Highlander, a 2007 V6 AWD (Sport). When I did my timing belt service in 2014 the cost was very close to a grand after the coupon I had. As you know, the timing belt service includes a water pump as well and I opted to have the shop use pre-mixed Toyota coolant as the replacement. Not a fan of tap water and I don’t trust shops to use distilled when they mix it with coolant. I had a Lexus dealership do the work. Why? Because if something went wrong on this critical service I knew that the Lexus dealer had the parts, budget, loaner cars, and experience to make it right. Here is a copy of the receipt if interested with some of my personal info redacted. At that same service, I did the all the fluids and the drive belts as well. You may want to consider doing the same if you have not recently. Good luck! My favorite family vehicle of the 20 that I have owned. 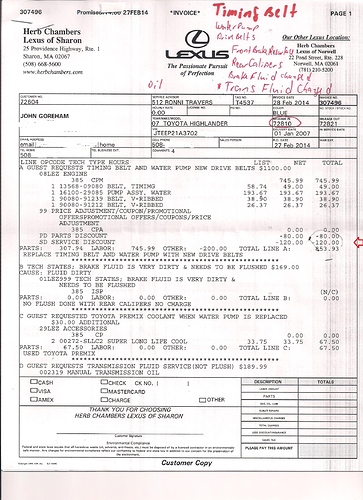 Timing belts on a transverse mounted engine are a pain…unless you have a lift.

I was able to replace the timing belt on my Pathfinders in less then 2 hours. A professional mechanic could do it in less time. But the engine was facing forward. The hardest part of the timing belt replacement was removing the radiator.