We need an unobstructed view . . . preferably one that shows the headlights and/or taillamps

Is there a reason why you need to identify this particular car . . . ?

Yeah, that’s a tough one, just have a little bit of the front turn signal. I’m surprised it doesn’t ring a bell with me.

This person has been stealing bikes in our area, is on trial for some this now, and has been casing our homes. We are trying to ID car to issue an alert for our neighborhood association. Thanks!! I agree that it may be a protege!! 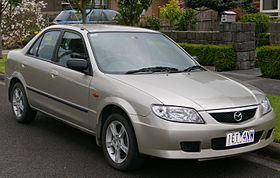 The rear passenger window looks different from the Protégé photo. That little triangle segment appears to be missing. It definitely looks like a steel wheel econobox, so Civic, Corolla, Sentra, 626, etc. from the 1990’s to early 2000’s I expect.

That little triangle segment appears to be missing.

I think it is there. look at this blowup. 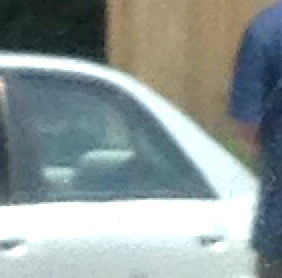 It might be best just to post the picture . Trying to say what this vehicle is without actually looking at it might cause more problems than your association needs . Put in your news letter that locking outside parked vehicles and not leaving garage doors open because possible casing has taken place.

it is a protege and thank you!!

Thanks for posting the resolution OP. Hope your neighborhood gets that bike theft problem solved too.

Not worthy of life