I changed the rear springs on my newly acquired '98 Escort last week. Now I am turning my attention the the other end.

The driver’s side CV shaft was making the dreaded popping noise, and had some lost motion in the outer end. It was past its prime. I got most of the shaft out, but the sort of triangular shaped flange stayed in the transmission. I have tried prying from the back side against the transmission, but it is very hard to get anthing long enough to pry with behind it from the bottom. I have tried pulling it with a clamp like this http://www.discount-pulling-clamps.com/pu0100.html and a come along, but the clamp kept slipping off. At least it slipped off before it pulled the door frame that I had it hooked to right out of my garage, but I suspect I was putting over 100 pounds of pull against it. The come along was how I pulled the shaft apart in the first place. I’ve done a bunch of these, and never had one hang up like this.

You need to remove the right halfshaft first, and then insert this tool in place of the halfshaft http://www.summitracing.com/parts/otc-7140 and then pound out the left side halfshaft. Notice the slot on the tool?

Over time these half shafts get stuck to the xmission and are difficult to free. On my Corolla, I improvised a slide hammer tool. Once everything is properly disconnected, & you have firm purchase on the shaft near the xmission, the shock force of the slide hammer is able to break it free.

Worked for me on my Corolla. Not sure if this works on Fords tho. Me, I’d rely on Tester’s advice first. But if that doesn’t work, a slide hammer might be an effective alternative.

@MGMcAnick here’s what you need.

But you also need the tool that @Tester showed you

Shoot, that just got twice as difficult as it needed to be. I never had to do one on an Escort before. Not one of Ford’s better ideas. I’ll see if Autozone has the tool on their “rental” list. They gave (charged) me the shaft. I may run by the library to see if they have a manual too.

I’m at the local library looking at a Ford Factory shop manual specific to the car. Pages 205-04-6&7. It makes no mention of any special tool, but does say that I must remove the crossmember to gain access with a prybar. Autozone only has the tool that hooks to a slide hammer to go behind the stuck flange. Has anyone here had success with either method on an Escort? Otherwise I may have to order Tester’s suggested tool. It probably won’t arrive before I leave on a week long trip. Meanwhile the garage is full of an Escort that can’t be driven. I’m typing this on my cell phone.

I beg to differ with you @keith. I have a set of slide hammer attachments for CV tulips. It is a set of adjustable collars that hang in the boot slot, a steel cable about 3 feet long with a threaded attachment to fit on the slide hammer. It works but it is aggravating. In a situation such as MGM’s I have usually welded a slide hammer hook to the tulip and yanked it out. Removing the CV joint from the opposite side and using a punch as described above does work well. Some transmissions have the inner CV fully recessed with no access to pry.

@RodKnox Have you had success removing one on the driver’s side of an Escort?

I sure don’t want to damage anything before I break down and order the special tool.

The makes and models seem to get lost in the soup, @MGM. But your problem was somewhat common for me and so I bought all the tools that promised to quickly get the stub out and found that the solution always included keeping a steady outward pull on the joint while simultaneously rapping it soundly. Before getting out the welder I usually locked a large Vice-Grip to the tulip and while pulling out on it I smacked the plier’s jaw with a dead blow hammer. Sometimes luck would be on my side. I assume that you are working at home on the floor so there is little room for flailing about with a heavy hammer while tugging at the same time. If you have a helper and 2 heavy Vice-Grips you might position one plier toward the top and a second toward the bottom where it will be a good target for a hammer and have the helper keep outward pressure on the upper plier. Good luck.

Rod, differ if you want but every manual for removing axles that I have seen calls for the use of a pry bar for removal but some special tool for installation, although I have always been able to just slide them in place.

But I have never done a Ford Escort, I did do a Ford Aspire once.

You have been lucky, @keith. There are several transmissions that put the inner joint is a depression that totally eliminates any access to get at the bottom of the tulip to pry outward.

I was not clear on this point, I was talking about using a pry bar as a general rule. I believe that Tester is probably correct in this particular case, he usually is.

Thanks to a GOOD slide hammer from AZ and the same body clamp I tried to use yesterday, the tulip is on the floor. Three good whacks convinced it. The new shaft is in place. Even after removing the cross member per Ford’s instructions, I couldn’t get a pry bar in behind the tulip. Thanks for the proper tulip terminology @RodKnox, and thanks for all of your help.

Life is good once again at the Morris Garage.

The Corolla’s shop manual says to pry them out too, but I never had any luck with prying out stuck axel shafts on my early 90’s vintage Corolla. I expect if I took enough stuff apart and freed up some prying room back there it might work, but the slide hammer is easier. For my Corolla at least. Congrats MGM on not yielding to your stuck half shaft.

Hey again… I got to this page by clicking a link from my topic page. you had mentioned the same thing to me the other day… let me ask you this… Now my passenger side axle has kind of like a carrier bearing… goes from the spindle to a like a carrier bearing type thing then there’s the shaft from that “carrier bearing” that goes into the transmission …so how does that work. I mean I can pull the axle on passenger side out and remove it completely …but there’s still that little bearing/shaft thing that actually goes into the transmission. I did not notice if it was hollow or if it just had splines in the one end. I’m not sure if it’s removable either…HOWEVER, I will find that out today …I know it’s early right now it’s 4 in the morning …losing sleep over this thing. 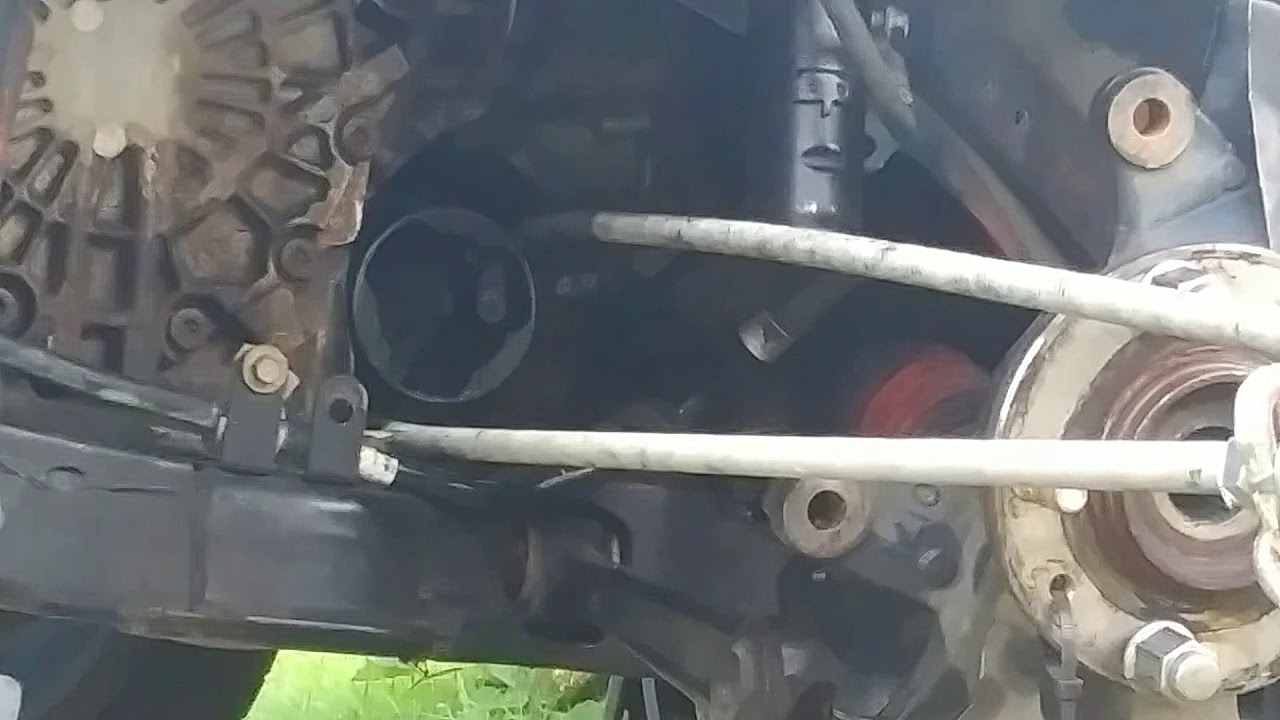 I was wrong I shortened a video to 1 minute 9 seconds and it shows three good pulls/Yanks… each pull had a good solid impact …so I don’t know , you can see the car almost coming off the the pads the blocks… So I think my next move is to just take the passenger side stuff off and try the dowel pin thing and knock it from the passenger side… Someone mentioned that the aftermarket c clips retainer clips were larger …this is true, for me, I order mine from RockAuto (excellent excellent Parts I the one I have now to my surprise is brand new not rebuilt.) excellent people by the way anyhow…so I use my original clips and both of them popped right in there, just slide it in there pop it with wooden mallet snap it right in not a problem