Hello I’m new to this fourm so bare with me. So I have a 2004 Hyundai x350 with I think a 5 speed auto. So I can’t seem to find the location of trans filter. So from what little research I could find is that from 2000 to 2002 the xg350 had a spin on trans filter on top of engine and was discontinued in favor of an internal filter. But I have an 04 and I can see where the spin on once was. I have changed filters befor but I only ever worked on American cars. The trans pan is sideways and I don’t know what’s behind it. I don’t want t take it off if not needed, but I keep getting mixed answers that its internal as in pulling most of the trans apart is this true? Not a simple drop pan type of change. So I drained pan, well it had a nut to drain the pan, easiest drain ever and put what it could take which is about 5 qt. most was left probly in torque converter. When I bought the car recently was downshifting hard so I decided to unhook negative cable on battery hoping it could relearn, and it did stop downshifting hard now it just shifts kind of sloppy from 2nd to 3rd like it’s almost delayed? Not slipping but the RPMs are going to a little to high for a normal shift like it doesn’t want to grab at the normal RPM range. Thanks 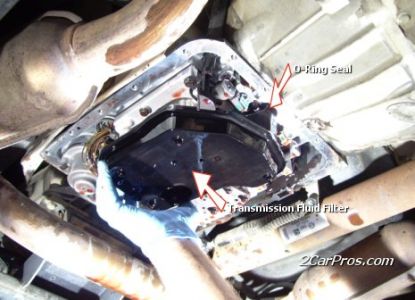 If its like the Honda and Acura, the internal filter is not meant to be replaced, except during a tear down. Just drain and fill.

Thanks guys I figured it would be to complicated for just a filter change. Maybe later on I will just get it flushed hoping it would make a differance. But put 300 miles on it and the code still hasent came back. I think it bugs me more that I forgot to check code befor unhooking battery, it may of just pin pointed what was going wrong with trans or the something completely different. I guess time will tell and my 15$ obd wifi scanner won’t find erased codes. Just new ones that pop on dash.

Suggest to try the drain and fill again in a week or two. A single drain/fill isn’t able to get all the old fluid out, maybe 50-60% is all. A multiple drain and fill is better than a single flush in my opinion, even if you can’t replace the filter. Make sure you are using the exact fluid the manufacturer recommends.

Amen to a second drain and fill (not a flush) and to use “the exact fluid the manufacturer recommends.”